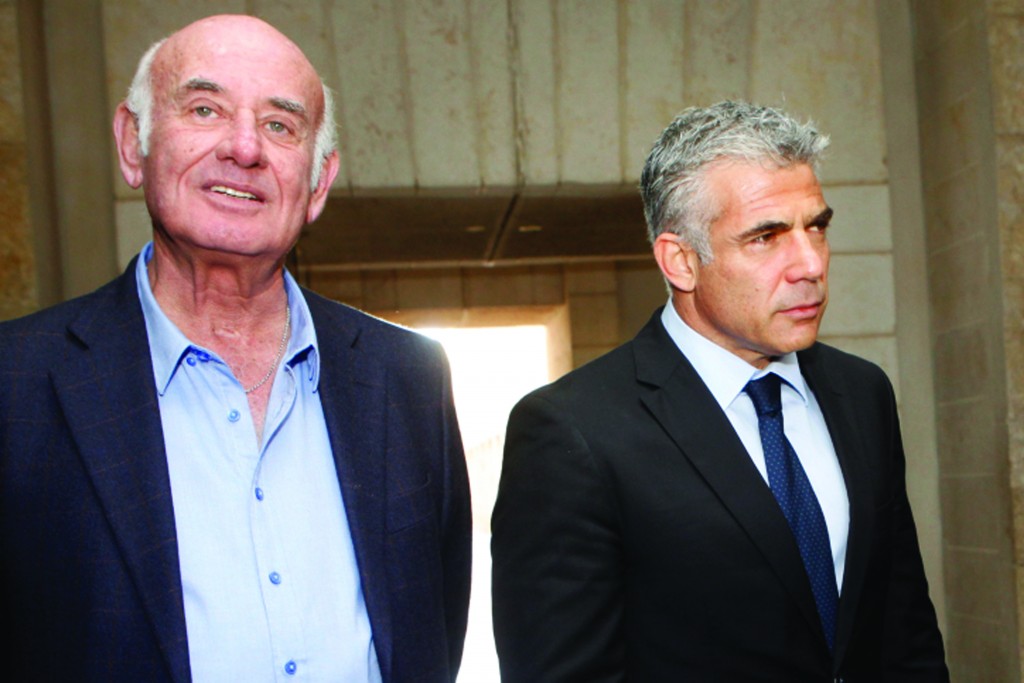 Israeli Education Minister Shai Piron (Yesh Atid) denied on Tuesday that his party leader Yair Lapid’s threat to bolt the government was merely a political trick, and stated that they are determined to pass a law forcing yeshivah students into the military.

Although the “coalition crisis” had died down as quickly as it came by late Monday, Piron attributed that to Prime Minister Binyamin Netanyahu’s intervention. Netanyahu reportedly instructed Defense Minister Moshe Yaalon, who had taken a strong stand against criminal sanctions on yeshivah students who refuse military service, not to hold up finalization of the Perry Committee recommendations.

However, details of the Netanyahu-Yaalon meeting were not publicized, and Yaalon has
thus far made no statement indicating a change of his position.

In any case, the committee was scheduled to meet on Wednesday morning to try to break the impasse on the issue of sanctions.

“There were no politics and no tricks,” Piron insisted in an interview with Ynet, adding, in a remark that revealed his party’s attitude toward chareidim, that “parasites will not be ‘kosherized.’”

Others, both inside the government and in the opposition, took a cynical view of Lapid’s performance this week.

Likud officials accused the finance minister of exploiting the draft issue to divert attention away from public dissatisfaction with his handling of the state budget, imposing an unequal economic burden on the poor and middle class.

Opposition leader Shelly Yacimovich Tuesday blasted Lapid for “the ease” with which he signed the value- added tax that would bring immediate price rises.

“Lapid did this for the simple reason that those who would be hurt by the decree are the poorest and the middle class, who do not enjoy protection from any source of power in the economy,” Yachimovich said.

Yacimovich called on coalition MKs to vote Wednesday against the decree, which she labeled as “cruel” and hurtful to economic growth.

Whether the coalition crisis was real or fabricated, the very real battle over the military draft and the economy continued, as United Torah Judaism presented a no-confidence motion against Prime Minister Binyamin Netanyahu’s government.

UTJ MK Yaakov Asher asked for a vote of no-confidence in the Knesset on Monday, charging that the government has been mishandling the economy while inciting against chareidim.

Denouncing the plans for higher taxes and painful budget cuts, the UTJ representative also accused Finance Minister Yair Lapid of attempting to lure the public into accepting the austerity plan with misleading budget figures and bombastic rhetoric about privatizing the ports. He scorned talk about taxes on luxury items as a cynical palliative.

Speaking in the Knesset plenum during the no-confidence debate on Monday, United Torah Judaism MK Rabbi Moshe Gafni warned Lapid that his relentless campaign of incitement against the chareidim, now accompanied by demands for criminalization of yeshivah students who won’t serve in the army, is “playing with fire.”

As we went to press, UTF MK Rabbi Moshe Gafni teamed up with Zahava Galon of the anti-religious Meretz party to produce a counter-productive economic plan as proof to show how damaging and unrealistic Yair Lapid’s economic plan is for the general population and not only for the chareidi.