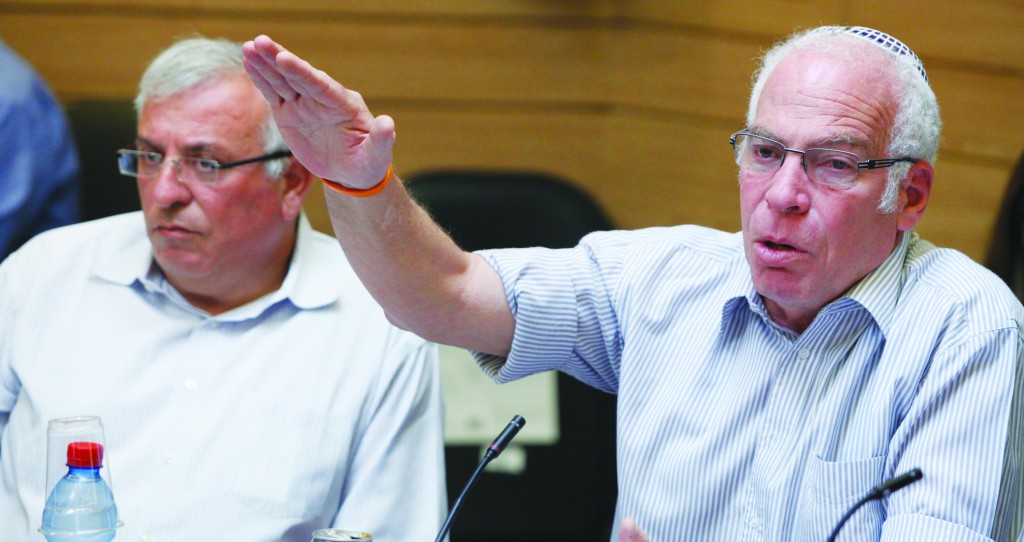 After the Perry Committee deadlocked on Sunday night over the issue of criminal sanctions for yeshivah students who refuse military induction, Finance Minister and Yesh Atid Chairman Yair Lapid threatened on Monday to take his party out of the government if their demands are not met.

The committee, tasked with formulating a replacement for the expired Tal Law which provided military exemptions for full-time yeshivah students, voted Sunday night for a maximum of 1,800 exemptions per year for students who are
exceptional. It also agreed to an extension of Hesder service from 16 to 17 months, far short of the 2 or 3 years sought by Yesh Atid, and seen as essentially a victory for the national religious camp.

However, after voting down a proposal to impose criminal sanctions on Roshei Yeshivah whose students do not comply with the new draft law, the committee members could not reach agreement on the issue of criminal sanctions for yeshivah students themselves who refuse military service.

Yesh Atid leaders were furious at Defense Minister Moshe Yaalon (Likud-Beiteinu) for  blocking the criminal sanctions in committee deliberations, according to Haaretz. “The conduct of the Likud-Beiteinu ministers during the committee debates was a blatant violation of the coalition agreement,” a Yesh Atid official charged.

But at a Likud meeting on Monday, Ya’alon accused Perry of adopting a program even more radical than what Yesh Atid presented during the election campaign. He demanded that the committee withdraw its proposal for forced enlistment and instead leave the matter to the discretion of the Defense Ministry.

Likud sources argued, “It’s Yesh Atid violating the coalition agreement, not Ya’alon. There
won’t be a coalition crisis unless Yesh Atid wants one.”

MK Ophir Akunis (Likud-Beiteinu) called on Yesh Atid to “stop the political spin; the election is over,” in an Israel Radio interview.

Prime Minister Binyamin Netanyahu tried to pacify the warring parties, saying that “until the new law is applied, we will see many more headlines and crises, both imagined and real.”

Netanyahu added, “I am sure we can find solutions to the isolated clauses which remain unresolved. There will be a law.”

Netanyahu met with Ya’alon Monday night asked him not to delay the bill, and said: “If it comes to it, we will discuss this item in future stages of the legislation,” Ynet reported.

But the seriousness of the crisis was reflected by Economy and Trade Minister Naftali Bennett’s firefighting comment: “I urge everyone not to lose control. We have to work hard until we reach a solution.

“No one wants to see police conduct mass arrests on Bnei Brak, but we want there to be enough incentives for chareidim to serve. We will meet and find a solution. I am very optimistic.”

Defense Minister Moshe Ya’alon said, “Yesh Atid would like to inflame the chareidi street, and I will not allow that.”  Chareidi representatives, who have been outspoken in opposition to the draft proposals, were keeping a relatively low profile on Monday.

“After the previous mistakes we have committed vis-à-vis Lapid, this time we decided to  sit this out for now,” a chareidi source told Ynet. “We have no interest in playing into his hands. We should let the controversy surrounding the enlistment of chareidim quiet down, go off the public agenda, so that the media goes back as soon as possible to deal with the budget and economic measures, and attack Lapid without mercy as it did in recent weeks.”

UTJ chair Yakov Litzman said, “I guess the finance minister feels he has lost the people. He feels that his voters left him, and polls show it, so he is looking for an excuse to escape so he won’t have to implement his measures against the people, especially those who voted for him.”

Addressing Lapid’s threat to bolt the coalition, he said, “So I, firstly I’m glad he wants to leave, and secondly, it opens the door to changes in both the equal burden bill and his other decrees as well,” he said.

They preferred to see someone like Labor leader Shelly Yacimovich fighting Lapid and Bennett. She predicted on Monday that a coercive draft will be counter-productive. “There will be enlistment of fewer chareidim with more headlines,” she said.

Speaking at a Labor party meeting, Yacimovich dismissed the furor over the draft bill “a battle of spin.”

“Everyone in this government is too busy with politics and arm-twisting to notice that all of the goals they set for themselves are falling by the wayside,” Yacimovich said. “The enlistment of chareidim, as things appear now, will completely fall apart.”

MK Yisrael Eichler (UTJ) offered a recommendation of his own:

“The IDF mandatory draft is so strongly opposed because of our religious sensitivity. The army framework is not conducive to a regimen of intense Torah study. The government would be wise to legislate recruitment according to quality, not quantity, for a professional, economic and highly efficient war machine, instead of a social melting pot that ends up sometimes contradictory to a soldier’s personal tendencies. I call to abolish the mandatory draft.”