National Obama: Government With Oklahoma ‘Every Step’ of the Way
National 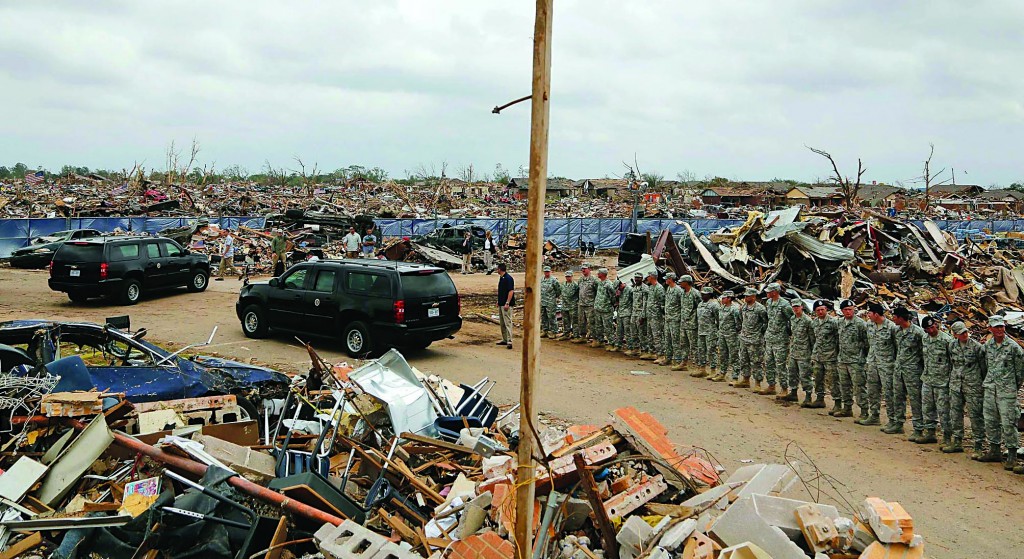 President Barack Obama visited tornado-devastated Moore, Okla., Sunday, consoling people staggered by the loss of life and property and promising that the government will be behind them “every step of the way.”

“I’m just a messenger here,” the president said, saying “folks are behind you” across America. He offered moral and monetary support in the wake of the monstrous EF5 tornado that killed 24 people, including 10 children, last Monday afternoon.

Standing with Gov. Mary Fallin and other state and federal officials, Obama noted a substantial rebuilding job ahead and said, “Our hearts go out to you.

“This is a strong community with strong character. There’s no doubt they will bounce back,” he said. “But they need help.”

The White House said the Federal Emergency Management Agency has already provided $57 million in rebates and incentives to help build about 12,000 storm shelters in Oklahoma.

“These storm shelters can be the difference between life and death,” presidential spokesman Josh Earnest told reporters accompanying Obama to Oklahoma on Air Force One.

For Obama, Sunday’s visit had an all-too-familiar ring.

Only five months into his second term, he has traveled to the northeast to console people in the wake of the Boston Marathon bombing and visited Connecticut and Arizona to comfort people traumatized by shooting rampages.

He also has undertaken his consoler-in-chief role at the site of plant explosions and mine disasters, not to mention a series of natural disasters including Joplin, Mo., and the Jersey Shore, which was heavily damaged by Superstorm Sandy last year.

Once on the ground, Obama urged the American people to make contributions, saying the damage was “pretty hard to comprehend.”

Shortly after his arrival on a partly cloudy day, Obama rode past grassy fields strewn with scattered debris, witnessing devastation so awesome that it appeared as if garbage had literally rained from the sky. His first stop was the demolished site of the Plaza Towers Elementary School, where seven students were killed when the tornado turned the one-story building into a heap of bricks, broken concrete and twisted metal.

“I know this is tough,” he told superintendent Susie Pierce. As he walked, the demolished school was on his left, and on his right, homes as far as the eye could see were reduced to piles of rubble. Vehicles were turned upside down; toys were strewn about with furniture and ripped-out wall insulation. Every tree had been stripped of its leaves and bark.

Obama later met privately with victims’ families at Moore Fire Department Station 1, which has turned into a command center with dozens of first responders sitting at folding tables where fire trucks are normally parked. Obama marveled that they saved so many lives “given the devastation.”