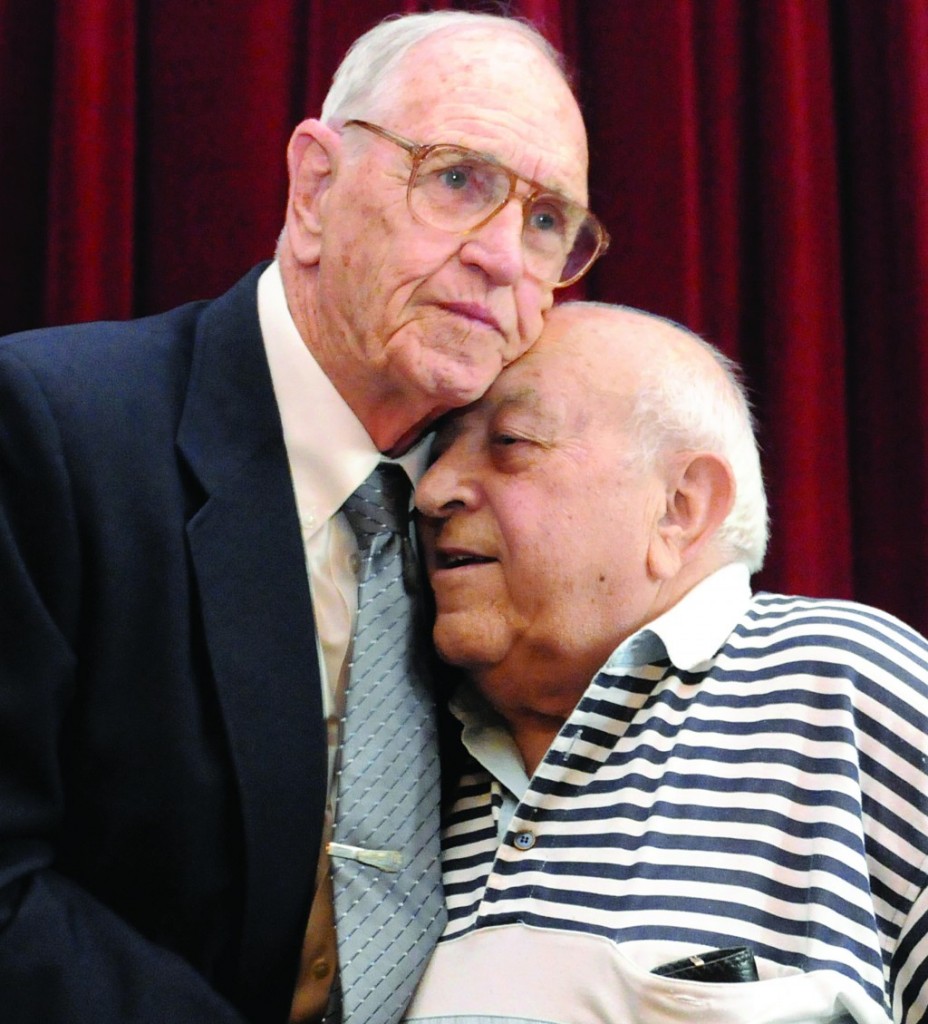 Moshe Avital, a Holocaust survivor, and Barry Lewis, an Army veteran, have plenty of fallen friends to honor on Memorial Day.

Between them, they’ve seen thousands of people die, both soldiers and civilians.

But this year, the men can think of something besides painful memories of war. On Thursday, Avital, 84, and Lewis, 90, met face to face for the first time in the auditorium at Wappingers Junior High School.

The last time Avital and Lewis were near each other was on the grounds of the Buchenwald concentration camp in Germany, nearly 70 years ago.

Lewis, of Denver, Delaware County, was a staff sergeant with U.S. Gen. George S. Patton’s Third Army when it liberated the camp on April 11, 1945. Avital was a 16-year-old Jewish prisoner in the camp, close to death. Thursday’s setting was much different. There was no threat of systematic executions, no emaciated corpses stacked in piles, no barbed wire surrounding a death camp.

Avital of New Rochelle, Westchester County, spoke to students about his time in the concentration camps before being formally introduced to Lewis by Jeffrey Place, a social studies teacher.

Place set up the meeting after learning that Lewis had a relative in the junior high school. It was “bashert,” a destined occurrence, Place said.

Even if they had met before, the two men wouldn’t have been able to recognize each other.

In 1945, Avital weighed 70 pounds after a two-year period of starvation and hard labor in six concentration camps. He was also an orphan. His mother and father, along with half of his 10 siblings, had been murdered during the Holocaust. His parents were sent to the gas chambers in Auschwitz, the first camp the family went to.

“They separated men and women when we got [to Auschwitz], and that was the last time I saw my mother,” he said.

Josef Mengele, an infamous  Nazi doctor at Auschwitz was known as the ‘Angel of Death’, was one of the first people Avital saw at the concentration camp.

“My father was immediately sent to the left, the gas chamber, but we didn’t know what it meant to go to the left or the right,” Avital said. “My brother was sent to the right to work.”

Avital stood in front of Mengele. “He hesitated and finally sent me to follow my brother,” Avital said.

The two eventually were separated when Avital was moved to different camps. He later heard that his brother died in a camp’s infirmary.

Buchenwald, the sixth and final camp Avital was in, became infamous for the cruelty its SS, or Schutzstaffel, officers inflicted on prisoners. Most prisoners there died of starvation and poor living conditions, Avital said.

“About four days before Americans liberated the camp, we stopped getting even the meager rations we had been given,” he said. Sometimes that was just a piece of bread with margarine, a small portion that caused the starving prisoners to attack each other for extra shares, Avital said.

“The German high command gave orders to the SS to annihilate the entire population because the Americans were coming closer,” Avital said. “Barrack by barrack we were taken into the woods, and … 60,000 of 80,000 prisoners were executed.”

Those in Avital’s barracks were about to be executed when two army tanks broke through the gates of Buchenwald, Avital said.

“We were told to run back into the barrack, but most could not walk anymore,” he said. “I had to crawl on my stomach, I was so sick.”

When Lewis first saw Buchenwald, he was a young man but an experienced soldier. He was born in Dover, England, left home and began his military service with the British merchant marines as a teen. He later landed in America and joined the army.

As a staff sergeant, Lewis landed on the beaches of Normandy on D-Day and had been fighting for nearly a year. He was among the first wave of soldiers who liberated Buchenwald.

“I had seen death, I had seen bodies — probably more than most people,” Lewis said. “But this was so horrible, I’ll just never get it out of my head. I really didn’t know what it was that I was going into. No one said there were civilians there.”

Soldiers brought those “who could be saved” into makeshift hospitals, Avital said. “I was there, hovering between life and death.”

Patton ordered the local townspeople to come see the aftermath of the camp.

“They swore they never knew it was there,” Lewis said. “But some of the townspeople had to work there.”

Lewis wasn’t in Buchenwald long. “There was still a war going on,” he said.

Avital is also a veteran. He was in the Israeli army before coming to the United States in 1950 to reunite with the three sisters and brother who survived.

The two men were thrilled to meet and said they want to keep in touch. Avital “devoted his life” to education, his wife Anita, their children and 11 grandchildren.

“Now that I met you, a real soldier who fought in order to get to Buchenwald, it gives me a real wonderful feeling,” Avital told Lewis.

But still, there are memories that haunt both men.

Avital will always think of the family he lost. And Lewis wonders how people can “do those things to each other,” he said.