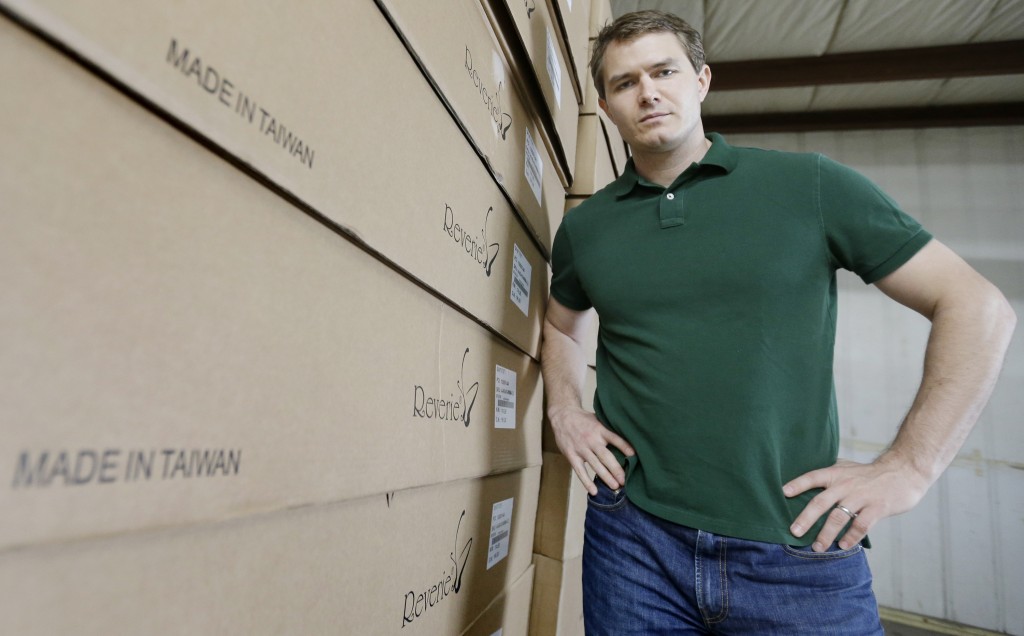 When Martin Rawls-Meehan started making adjustable beds in 2004, it was a foregone conclusion that key parts would be made overseas. It was cheaper to manufacture in Taiwan than in the U.S. And from Taiwan, it was easier to ship to customers in Asia.

But this year, his company, Reverie, began making some of its beds entirely in a factory in New York. Shipping costs from Taiwan have soared between 50 percent and 60 percent since the company was founded.

“Shipping costs are tremendous,” he says. “I could put that money into the manufacturing side in the U.S.”

Reverie is one of a growing number of small businesses that are chipping away at the decades-old trend of manufacturing overseas. They’re doing what’s known as “reshoring” – moving production back to U.S. factories as labor costs grow in countries like China and India and shipping also becomes more expensive. Over the last 20 years, the price of a barrel of oil has risen to about $95 from $20.

There are other issues encouraging the shift. Owners are tired of having to wait weeks for shipments on slow-moving container ships, and they want to get products to customers faster. Some newer businesses aren’t even considering overseas manufacturing.

And it’s not just small businesses. Some of the largest companies in the U.S. are also joining the trend. Apple Inc. and Caterpillar Inc. are among the manufacturers planning to bring production back to the U.S.

Reverie has had the bases of its beds made in Taiwan since the company was founded. Rawls-Meehan and a business partner in Taiwan agreed that the cost savings and proximity to many customers were good reasons to manufacture there.

“The mentality was that products were going to be manufactured more cheaply in Asia than in the U.S.,” Rawls-Meehan says.

But shipping costs have risen to as much as 20 percent of the wholesale cost of a bed made in Asia. In 2004, it was just 10 percent on some of Reverie’s products. So the company is now making a new line of upscale beds in Silver Creek, N.Y., near Buffalo. Shipping on those beds accounts for no more than 5 percent of the wholesale price. That offsets the higher cost of labor in this country.

Rawls-Meehan is considering moving more of his manufacturing to the U.S., but because the company also sells beds to Asia and Australia, he says it likely will always have overseas production.

A good deal of U.S. manufacturing shifted to foreign shores in the 1990s and early 2000s. Workers in China, India and other countries earned far less than workers in U.S. factories. That lowered costs substantially for U.S. companies. Between 1997 and 2008, the U.S. lost nearly 4.5 million manufacturing jobs, according to the Census Bureau. And the amount of overseas manufacturing by U.S. companies grew 141 percent between 1997 and 2010, according to the government’s Bureau of Economic Analysis.

But the growing middle class in countries such as China and India have been demanding and getting higher wages. In Asia, labor costs are rising 20 percent a year, compared to 3 percent in the U.S., says David Simchi-Levi, a professor at the Massachusetts Institute of Technology whose specialties include supply chain management.

A weaker dollar has also made foreign-made goods more expensive. A study by the consulting firm AlixPartners predicts that the costs of manufacturing in the U.S. and China, on average, would be equal in 2015. For products including disposable packaging and some metal parts, costs are already equal or less when they’re made in the U.S., the study found.

Reshoring began picking up momentum in 2010, after the recession and as the dollar began to lose value, says Lisa Ellram, a professor at Miami University of Ohio who specializes in supply chain management. Businesses that were unsure how strong their sales would be in a weak economy didn’t want to make as many commitments to far-flung factories.

“They really just didn’t have as much certainty about their volume and their needs, so it was maybe a little bit easier to deal with somebody closer,” she says.

Innovations in manufacturing in the U.S. are encouraging the shift. Many U.S. companies use robots and highly specialized processes that allow them to make custom components for the automotive and aerospace industries.

“Instead of hiring people, we’re using robots,” Ellram says. Chinese companies are also using robots, but U.S. manufacturers are ahead of them, she says.

The trend could gain momentum because demand for U.S. goods is growing. Ninety-five percent of manufacturers surveyed last year said they are increasing their purchases from domestic companies, or keeping them at the same level as 2011, according to ThomasNet, a company that operates an online marketplace where businesses can connect with manufacturers, distributors and service companies.

The amount of time it takes to get goods made overseas is another reason manufacturing is coming back to the U.S. It’s taking longer to ship finished products because cargo ships have lowered their speed by 20 percent to conserve fuel, Ellram says. That reduction adds four or five days to a container ship trip from China, she says. It takes two weeks or more for a ship to travel from China to the U.S., depending on which ports it departs from and where it makes its deliveries.

Shipping times matter for companies that need to get their goods to market quickly. Now that Cotton Babies, a manufacturer and retailer of baby merchandise, has moved manufacturing of its cotton diapers to Denver from Egypt, it has cut in half the time it takes to get them to market, says CEO Jennifer Labit.

Product development can be slowed by the distance between designers in the U.S. and manufacturers in other countries, Labit says. Communication takes longer and expensive overseas trips are often necessary to make sure that the products are being made to specifications.

“Those are the things that (domestic) small businesses can use as a selling point,” she says.

A myriad of problems helped Reading Truck Body decide to bring manufacturing of truck parts back to the U.S. from China.

Shipments were disorganized. The company didn’t know until it opened containers which parts had been shipped. That meant it couldn’t be sure ahead of time which of its truck bodies could be finished and sold, national sales director Craig Bonham says. Reading, based in Reading, Pa., also was concerned about the amount of time it took to get shipments.

“It spans about three months from purchase order to the time you get products to North American shores,” Bonham says. “That timeline did not allow us to become reactionary to market demands.”

Reading lost some sales because it didn’t have the parts to finish a truck a customer wanted. But the impact of unpredictable shipments went beyond lost revenue — it also led to chaos on the production line and frustration among the company’s managers.

“You feel a larger sense of dependency when you’re relying on someone that far away,” Bonham says. The company received its last shipment from Asia in December.

It also dealt with high expenses to send two employees to China each quarter, at a cost of $100,000 a year.

But with production now entirely in the U.S., the company is more confident.

“We have more control of our destiny,” he says.