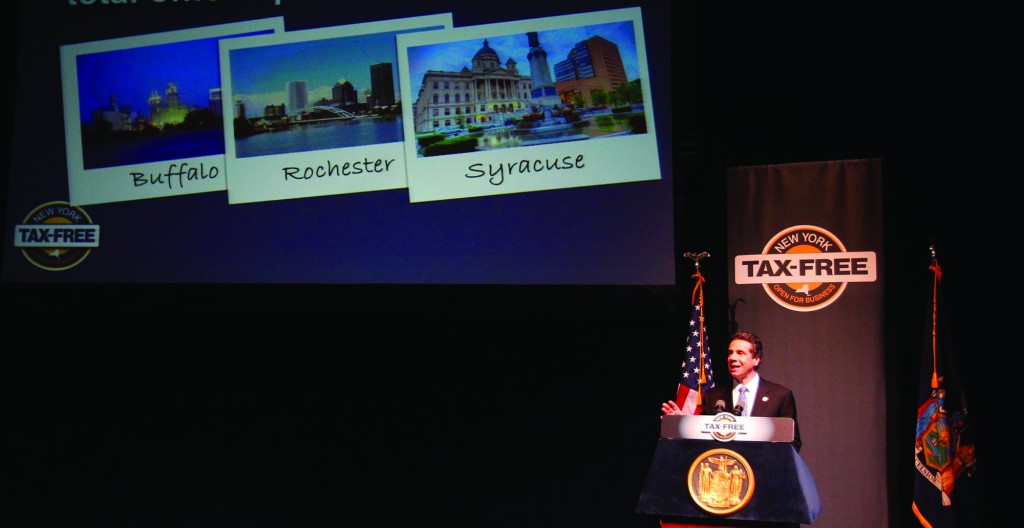 High-tech businesses from other states and abroad that move onto or next to college campuses in New York would operate free of all business, property and personal income taxes for 10 years under a proposal by Gov. Andrew Cuomo.

The governor and his cabinet fanned out around the state Thursday to push the proposal. Cuomo planned to discuss his initiative at the State University at New Paltz in the Hudson Valley. Lt. Gov. Robert Duffy will be in Rochester.

Cuomo said the plan would create jobs in a long-stagnant upstate economy by connecting academic research campuses with businesses in those fields.

“We create great businesses here in this state because we have great schools and we have great young minds,” Cuomo said Wednesday.

“We lose them in the first year. Why? Because we have an anti-business reputation, we’re a high-tax state,” Cuomo said. “What we want to do is create an environment where those businesses stay here and create jobs. … There would be no place in the country that you could go and pay less taxes.”

This month, Chief Executive magazine ranked New York as the 49th-worst state for business in the opinion of CEOs questioned, based on high taxes, bureaucracy and regulations.

Assembly Speaker Sheldon Silver (D-Manhattan) said after the Albany announcement that he will insist that current New Yorkers benefit from the new jobs and there would be serious “claw back” provisions and penalties for companies that fail to meet promises of jobs and development.

Silver says that project has been discussed for weeks and he expects it to be adopted by the Legislature before the end of its session June 20.

“It’s not forever. We’re talking about some five-year benefits, some 10-year benefits,” Silver said. “Eventually they are going to become fully taxpaying citizens.”