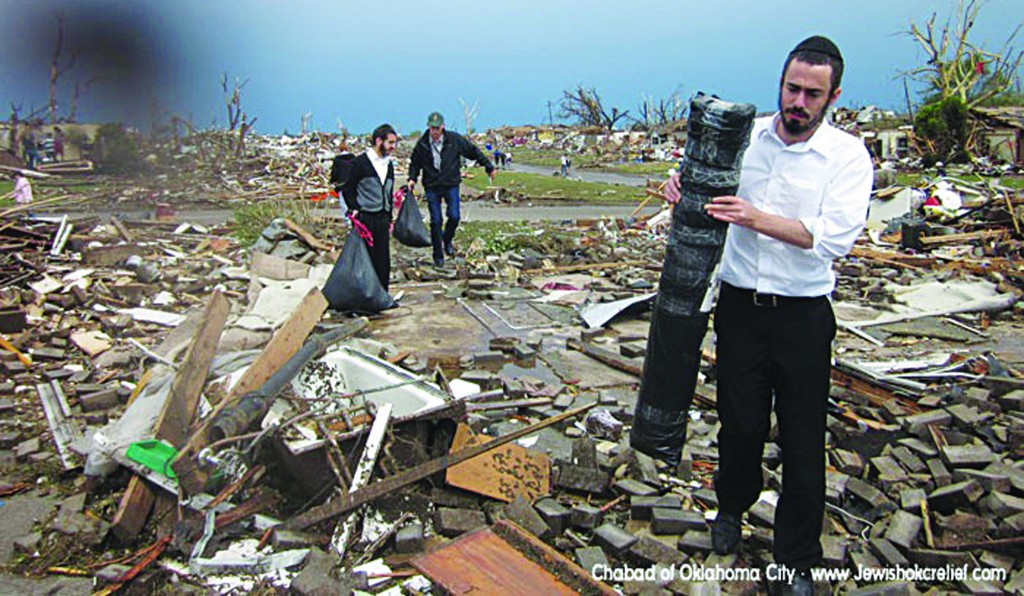 With a wide swath of suburban Oklahoma City destroyed and the need for food and basic living supplies growing, the Chabad Community Center of Southern Oklahoma continued its efforts to assist those devastated by the tornado that sped through parts of Oklahoma City and its suburbs Monday and Tuesday afternoon leaving 24 dead and nearly 250 people have been reported injured.

Rabbi Ovadia Goldman, co-director of Chabad-Lubavitch of Oklahoma City, posted a report at 1 a.m. on Wednesday on the Chabad disaster relief website, following two days of nonstop efforts by the Chabad staff and three young bachurim who are part of the Glenna and Richard Tanenbaum Rabbinic Internship Program.

Goldman said that even with so many homes and businesses in ruins, a modicum of hope lay in the extent of the relief efforts themselves: “It’s been exhausting, emotionally draining, but in so many ways heartwarming.”

He went on to describe the extent of aid offered, noting that they opened their Chabad center early in the morning for those who wanted to drop off supply items before going to work, and that people have come by the past few days bringing basic supplies.

“We’re organizing 20,000 pounds of meat products and 1,000 pounds of cheese product to come from kosher companies,” he wrote. “We’ve been in close contact with state and local government officials, as well as relief agencies, to help coordinate shipments and let them know what companies from out of state are willing to donate.”

The three bachurim summed up their feelings about this natural disaster: “It’s really given us a new perspective on what is truly important in life.”

Goldman agreed, and emphasized the extent of concern from throughout the United States. “The response has been overwhelming,” he said, adding that calls have come in from individuals and organizations in New York, Ohio, Iowa, Illinois and California — and even from abroad. And they have been accompanied with kind words and offers to help in any way they can.

And that’s especially meaningful, he said, because “the community that was hit is facing some short-term real needs, and they’re going to be facing longer-term needs as well.”