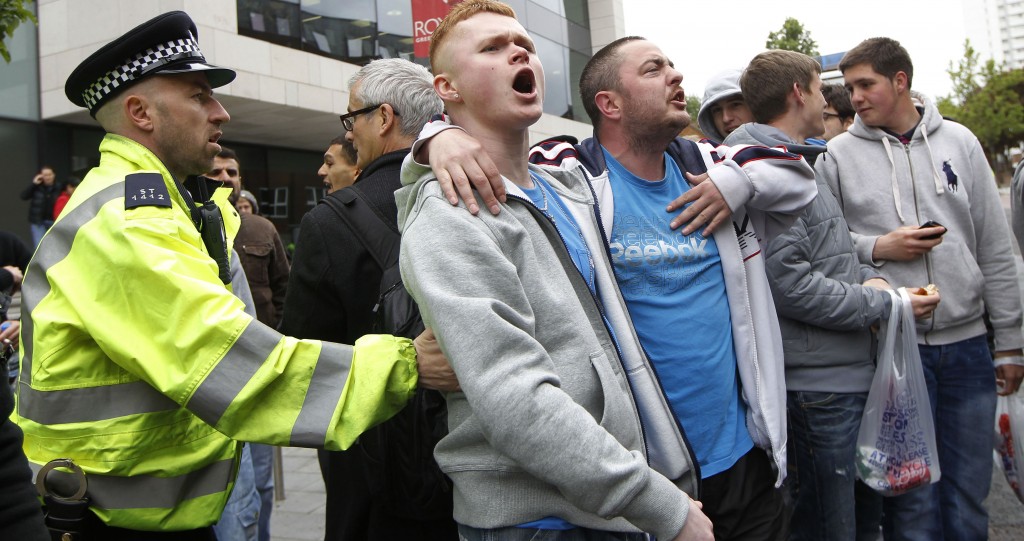 British police arrested two more people on Thursday in a hunt for accomplices of two British men of Nigerian descent accused of hacking a soldier to death on a London street in revenge for wars in Muslim countries.

The two suspected killers, now under guard in hospitals, had been known to security services before Wednesday’s daylight attack, security sources said. Another man and a woman, both age 29, were detained on suspicion of conspiracy to murder.

One of the assailants, filmed calmly justifying the killing as he stood by the body holding a knife in bloodied hands, was named by acquaintances as 28-year-old Londoner Michael Adebolajo, a British-born convert to Islam.

The attack came just a month after the Boston Marathon bombing and was the first Islamist killing in Britain since local suicide bombers killed 52 people in London in 2005.

Adebolajo and the other man, who may have been born abroad and later naturalized as British, were shot by police at the scene. Officers on the case raided six homes on Thursday.

Prime Minister David Cameron held an emergency meeting of his intelligence chiefs to assess the response to what he called a “terrorist” attack; it was the first deadly strike in mainland Britain since local Islamists killed dozens in London in 2005.

“We will never give in to terror or terrorism in any of its forms,” Cameron said outside his Downing Street office.

“This was not just an attack on Britain and on the British way of life, it was also a betrayal of Islam and of the Muslim communities who give so much to our country.”

President Barack Obama condemned it “in the strongest terms,” adding in a statement, “The United States stands resolute with the United Kingdom, our ally and friend, against violent extremism and terror.”

A source close to the investigation told Reuters that both attackers were known to Britain’s MI5 internal security service. Adebolajo had handed out radical Islamist pamphlets but neither was considered a serious threat, a government source said.

Another source close to the inquiry said the local backgrounds of the suspects in a multicultural metropolis and the simplicity of the attack made prevention difficult.

“This was quite low-tech, and that is frankly pretty challenging,” the source said.

The attack revived fears of “lone wolves,” who may have had no direct contact with al-Qaida but are inspired by radical preachers and by Islamist militant web sites.