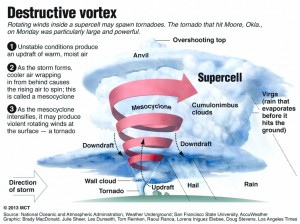 The tornado that tore through an Oklahoma City suburb destroyed or damaged as many as 13,000 homes and may have caused $2 billion in overall damage, officials said Wednesday.

State authorities meanwhile said two infants were among the 24 people who perished in the twister.

Oklahoma Insurance Department spokeswoman Calley Herth told The Associated Press that the early monetary damage tally is based on visual assessments of the extensive disaster zone that stretches more than 17 miles and the fact that Monday’s tornado was on the ground for 40 minutes.

The financial cost of the tornado in Moore could be greater than the $2 billion in damage from the 2011 tornado that killed 161 people in Joplin, Mo., Herth said, adding that the Joplin twister left a smaller trail of destruction.

For the first time Wednesday, authorities provided a clearer accounting of the destruction.

Between 12,000 and 13,000 homes were destroyed or damaged and 33,000 people were affected in some way by the storm, said Oklahoma City Mayor Mick Cornett, speaking at a news conference. He also put the monetary damage estimate at between $1.5 billion to $2 billion.

Emergency officials were unable to put a figure on the number of people left homeless, because many people have been taken in by relatives and only a few dozen have stayed overnight at Red Cross shelters.

Six adults remain unaccounted for since the tornado, said Oklahoma Department of Emergency Management Director Albert Ashwood. It’s possible those people had just “walked off” their properties or could still be found in the rubble, Ashwood said.

Secretary of Homeland Security Janet Napolitano visited the area Wednesday, pledging the government’s support and urging people to register with the Federal Emergency Management Agency to see what aid they qualify for.

“We know that people are really hurting,” she said. “There’s a lot of recovery yet to do…. We will be here to stay until this recovery is complete. You have our commitment on that.” President Barack Obama plans to meet with victims and first responders, and view the destruction firsthand when he visits the area on Sunday, White House spokesman Jay Carney said.

The National Weather Service said the tornado was a top-of-the-scale EF5 twister with winds of at least 200 mph — the first EF5 tornado of 2013.

Dan Ramsey, president of the Independent Insurance Agents of Oklahoma, said a damage estimate in the low billions is “not surprising.”

“Certainly it’s in the hundreds of millions,” Ramsey said. “I suppose seeing projections from similar disasters, it could stretch to a billion” or more.

This article appeared in print on page 4 of the May 23rd, 2013 edition of Hamodia.