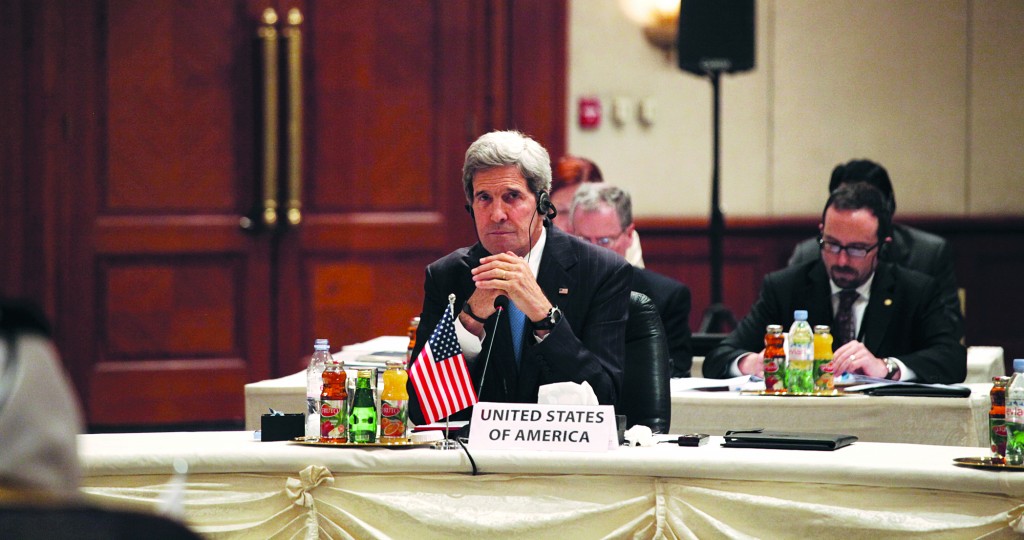 The U.S. and several key allies looked again Wednesday for a strategy to end Syria’s civil war, their united efforts unable at the moment to stem the Assad regime’s military gains and Washington still unwilling to join those providing the rebels with lethal military aid.

Secretary of State John Kerry allowed that President Barack Obama won’t send American troops to Syria. But he made clear that more aid to the rebels would be coming if the regime refuses to cooperate with an international effort — to be put together in June in Geneva — to form a transitional government.

“In the event that we can’t find that way forward, in the event that the Assad regime is unwilling to negotiate Geneva in good faith, we will also talk about our continued support, growing support for opposition in order to permit them to continue to fight for the freedom of their country,” Kerry told a news conference with Jordanian Foreign Minister Nasser Judeh.

The two men later joined nine of their colleagues from Europe and the Arab world in the Jordanian capital of Amman, alongside Syrian opposition leaders George Sabra and Gen. Salim Idris to plot a path forward. There, the U.S. and its partners sought to convince Syria’s rebels of the need to participate in any peace effort.

“That path would lead to a lot more families being torn apart, to a lot more refugees crossing the borders,” he said. “It is a path that would lead, potentially, to the splitting apart of Syria itself.”

Wednesday’s meeting came after several weeks of military gains by the Assad regime, including the reopening of a key southern highway to Jordan and a push into a strategic rebel-held western town over the weekend.

Such successes will likely harden Assad’s position in any peace talks. The Syrian leader has said that he will not step down as a result of transition talks, and that Syria’s political future must be determined in elections. More than 70,000 Syrians have been killed since March 2011, according to the United Nations.

A Jordanian-based Western diplomat, who insisted on anonymity because he is not authorized to speak publicly on the matter, said the Assad regime was proving more resilient than expected. He said his government was concluding the rebels might not be able to defeat it without greater and more direct assistance.

Some of that new resilience in the Syrian regime comes from help from Iran and the Hizbullah terrorist movement.

Kerry warned those regime allies to stop providing assistance to Assad, saying such activity “perpetuates the regime’s campaign of terror against its own people.”

He didn’t spell out any specific American threats of action, but said Obama was keeping all options on the table.