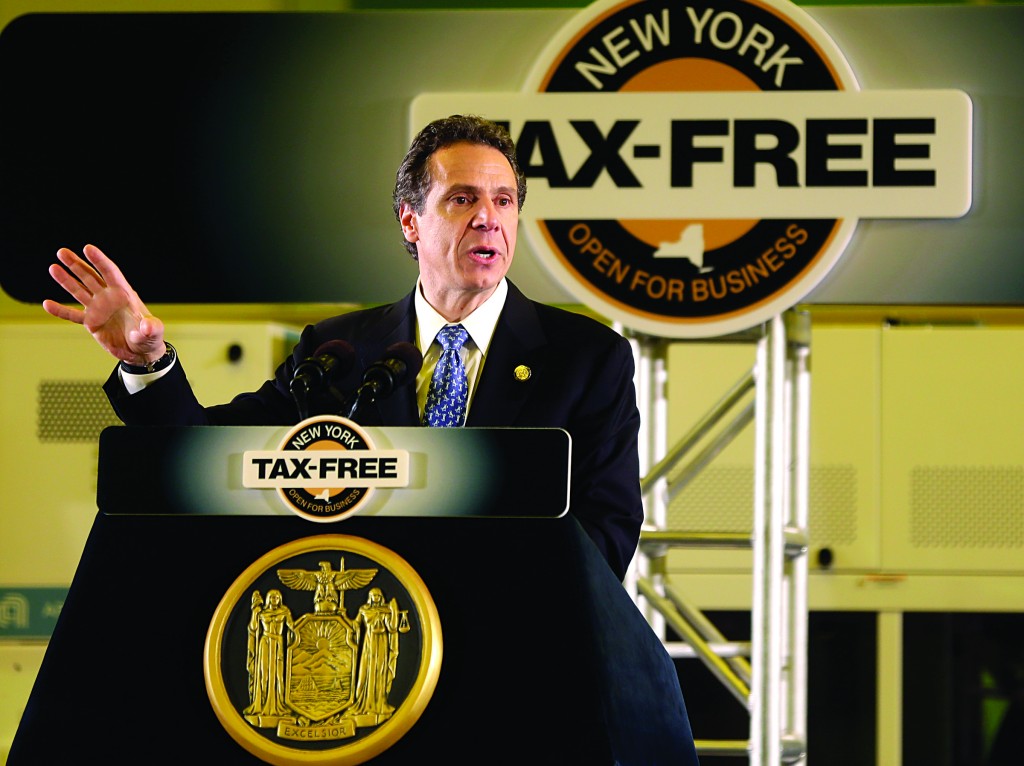 Seeking to reverse New York State’s reputation as one of the least hospitable to businesses, Gov. Andrew Cuomo proposed Wednesday that high-tech businesses from other states and abroad that move onto or next to college campuses in New York would operate free of all business, property and personal income taxes for 10 years.

Cuomo said the plan would create jobs in a long-stagnant upstate economy by connecting academic research campuses with businesses in those fields.

“We create great businesses here in this state because we have great schools and we have great young minds,” Cuomo said Wednesday in Buffalo during a daylong tour of announcements.

“We lose them in the first year. Why? Because we have an anti-business reputation, we’re a high tax state,” Cuomo said. “What we want to do is create an environment where those businesses stay here and create jobs. … There would be no place in the country that you could go and pay less taxes.”

It’s unclear whether the proposal would help retain new companies beyond the 10-year period when they would face what are now some of the nation’s highest taxes. Cuomo wouldn’t answer questions after his first presentation at the state College of Nanoscale Science and Engineering in Albany.

This month, Chief Executive magazine ranked New York as the 49th worst state for business in the opinion of CEOs questioned, based on high taxes, bureaucracy and regulations.

The full exemption of all taxes is a “promising new wrinkle,” said E.J. McMahon of the fiscally conservative Manhattan Institute.

“We need to improve our overall tax structure and make it friendly to business,” said Senate Republican leader Dean Skelos. He said the state also needs to cut its business regulations and bureaucracy.

“Why,” asked Republican Assemblyman Kieran Michael Lalor back in Albany, “should New York’s struggling small businesses continue to pay high taxes, while the governor lets a few pay no taxes at all?”

In Buffalo, reporters asked Cuomo about just that.

“We’re working — we have been the last two years — reducing taxes all across the board,” Cuomo said. He referred indirectly to the two times he and the Legislature have extended what was to be a temporary $2 billion income tax increase for millionaires, which Cuomo and the Senate Republican had opposed the tax as a job killer during the 2010 campaigns. That measure helps pay for a modest but rare cut in middle class income taxes.

“The governor’s credibility is undermined by his insistence on over-spinning the record,” McMahon said. He said extensions of this and other taxes that were due to expire and the increase in the minimum wage “outweigh the benefits of the plan announced today.”

“Good politics? Maybe,” McMahon said. “But no one would call this a pro-growth tax policy.”