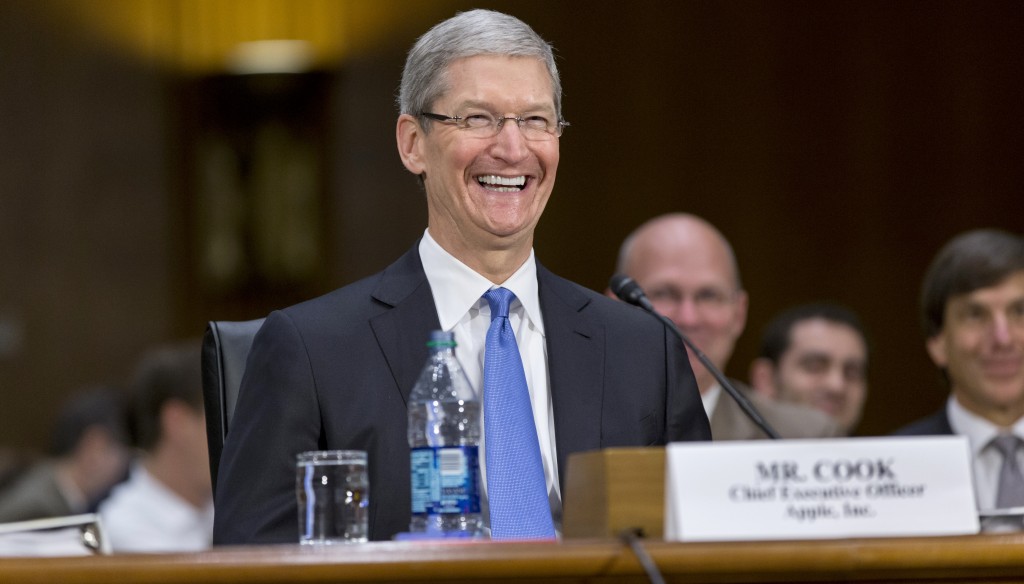 The Senate dragged Apple Inc., the world’s most valuable company, into the debate over the U.S. tax code Tuesday, grilling CEO Tim Cook over allegations that its Irish subsidiaries help the company avoid billions in U.S. taxes.

Cook said the subsidiaries have nothing to do with reducing its U.S. taxes, a message he struggled to convey to the Senate Permanent Subcommittee on Investigations.

“We pay all the taxes we owe — every single dollar,” Cook said. “We don’t depend on tax gimmicks.”

The senate subcommittee released a report Monday that held up Apple as an example of the legal tax avoidance made possible by the U.S. tax code. It estimates that Apple avoided at least $3.5 billion in U.S. federal taxes in 2011 and $9 billion in 2012 by using its tax strategy, and described a complex setup involving Irish subsidiaries as being a key element of this strategy.

But Cook said the Irish subsidiaries don’t reduce the company’s U.S. taxes at all. Rather, the company avoids paying the 35 percent federal tax rate on profits made overseas by not bringing those profits back to the U.S., a practice it shares with other multinationals.

Apple’s enormous, iPhone-fueled profits mean that it has more cash stashed overseas than any other company: $102 billion.

Cook reaffirmed Apple’s position that given the current U.S. tax rate, it has no intention of bringing that cash back to the U.S. Like other companies, it has a responsibility to shareholders to pay as little as possible in taxes.

In effect, Apple is holding out for a lower corporate tax rate, and Cook spent some of his time in the spotlight to advocate for one, accompanied by a streamlining of the tax code to eliminate deductions and credits.

Cook, who is more accustomed to commanding a stage in front of investors and techies than facing a congressional committee, took a defensive tone with his opening statement. He punched out words when stressing the 600,000 jobs that the company supports, adding that Apple is the nation’s largest corporate taxpayer.

At the same time, Cook said he was happy to appear to be able to give Apple’s side of the story.

“I’m saying it’s who we are as people. … Wherever we are, we’re an American company,” Cook insisted, when asked about Apple’s use of affiliate companies in Ireland.

It was the first time an Apple CEO testified before Congress. Cook did so voluntarily. He appeared with Apple CFO Peter Oppenheimer and Head of Tax Operations Phillip Bullock.

Sen. Carl Levin, D-Mich., the panel’s chairman, said Apple’s use of loopholes in the U.S. tax code is unique among multinational corporations.

Apple uses five companies located in Ireland to carry out its tax strategy, according to the congressional report. The companies are located at the same address in Cork, Ireland, and they share members of their boards of directors. While all five companies were incorporated in Ireland, only two of them also have tax residency in that country. That means the other three aren’t legally required to pay taxes in Ireland, because they aren’t managed or controlled in that country, in Apple’s view.

The report says Apple capitalizes on a difference between U.S. and Irish rules regarding tax residency. In Ireland, a company must be managed and controlled in the country to be a tax resident. Under U.S. law, a company is a tax resident of the country in which it was established. Therefore, the Apple companies aren’t tax residents of Ireland or the U.S., since they weren’t incorporated in the U.S., in Apple’s view.

“Apple is exploiting an absurdity,” Levin said at the start of the hearing.

The core of Levin’s argument is that Apple has shifted intellectual property rights, like patents, to its Irish subsidiaries, which means other divisions pay royalties to those subsidiaries for their sales.

Apple executives countered that the main company has kept the rights for North and South America, so only royalties for overseas sales flow to the Irish subsidiaries. Also, the Irish companies pay for some of research and development costs incurred at Apple’s headquarters in Cupertino, Calif.

“What Apple is doing is pretty mainstream,” said accounting expert Robert Willens, in an interview. Shifting around the intellectual property rights has a minor effect compared to the simple avoidance of U.S. taxes by not repatriating profits, he said.

The spotlight on Apple’s tax strategy comes at a time of fevered debate in Washington over whether and how to raise revenues to help reduce the federal deficit. Many Democrats complain that the government is missing out on billions of dollars because companies are stashing profits abroad and avoiding taxes. Republicans want to cut the corporate tax rate of 35 percent and ease the tax burden on money that U.S. companies make abroad. They say the move would encourage companies to invest at home.

While the two parties agree that reform is necessary, there is little agreement about what shape it would take. Throughout the hearing, senators on the panel seized on Apple’s situation to illustrate their belief that the U.S. tax system is in dire need of repair.

White House spokesman Jay Carney said the issue highlighted by the Senate panel’s report, unfairness in the U.S. tax code, is one of longstanding concern to President Barack Obama. Carney said Obama has long favored proposals “to ensure that American companies cannot use off-shore profit-shifting to avoid paying taxes,” including a proposal for a minimum tax on foreign earnings.

“This has been a major priority of his because he thinks it is inexplicable that our tax code would actually be written in a way that rewards companies for taking jobs and profits offshore, and thereby penalizes companies for doing what we want them to do, which is create jobs and opportunity here in the United States,” Carney said Tuesday.

However, Apple’s Irish subsidiaries date back thirty years, to the time when the Macintosh computer was Apple’s banner product, and its profits were a fraction of 1 percent of today’s figure.

The subcommittee also has examined the tax strategies of Microsoft Corp., Hewlett-Packard Co. and other multinational companies, finding that they too have avoided billions in U.S. taxes by shifting profits offshore and exploiting weak, ambiguous sections of the tax code. Microsoft has used “aggressive” transactions to shift assets to subsidiaries in Puerto Rico, Ireland and Singapore, in part to avoid taxes. HP has used complex offshore loan transactions worth billions while using the money to run its U.S. operations, according to the panel.