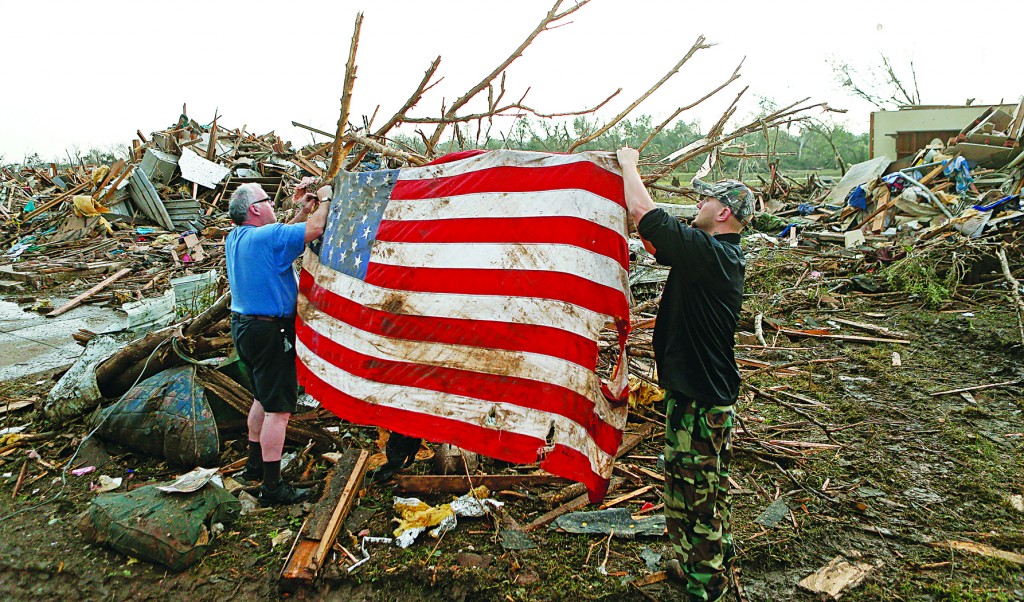 Fire Chief Says Search Is Over in Oklahoma

The search for survivors and the dead was nearly complete in the Oklahoma City suburb that was smashed by a mammoth tornado, the fire chief said Tuesday.

Gary Bird said he’s “98 percent sure” there are no more survivors or bodies to recover under the rubble in Moore, a community of 56,000 people.

His comments came after emergency crews spent much of the day searching the town’s broken remnants for survivors of the twister that flattened homes and demolished an elementary school. The storm killed at least 24 people, including at least nine children.

Every damaged home has been searched at least once, Bird said. His goal is to conduct three searches of each location just to be sure. He was hopeful the work could be completed by nightfall, but the efforts were being hampered by heavy rain.

Earlier in the day, the state medical examiner’s office cut the estimated death toll by more than half. Gov. Mary Fallin vowed to account for every resident.

“We will rebuild, and we will regain our strength,” said Fallin, who went on a flyover of the area and described it as “hard to look at.”

Amy Elliott, a spokeswoman for the medical examiner, said she believes some victims were counted twice in the early chaos of the storm that struck Monday afternoon. Downed communication lines and problems sharing information with officers exacerbated the problem, she said.

“It was a very eventful night,” Elliott said. “I truly expect that they’ll find more today.”

Authorities initially said as many as 51 people were dead, including 20 children.

New search-and-rescue teams moved at dawn Tuesday, taking over from the 200 or so emergency responders who had worked all night. A helicopter shined a spotlight from above to aid in the search.

Many houses have “just been taken away. They’re just sticks and bricks,” the governor said, describing the 17-mile path of destruction.

Emergency crews were having trouble navigating neighborhoods because the devastation was so complete, and there are no street signs left standing, Fallin added.

More than 200 people had been treated at hospitals.

Other search-and-rescue teams focused their efforts at Plaza Towers Elementary, where the storm ripped off the roof, knocked down walls and turned the playground into a mass of twisted plastic and metal as students and teachers huddled in hallways and bathrooms.

Seven of the nine dead children were killed at the school, but several students were pulled alive from under a collapsed wall and other heaps of mangled debris. Rescue workers passed the survivors down a human chain of parents and neighborhood volunteers. Parents carried children in their arms to a triage center in the parking lot. Some students looked dazed, others terrified.

Officials were still trying to account for a handful of children not found at the school who may have gone home early with their parents, Bird said Tuesday.

After hearing that the tornado was headed toward another school called Briarwood Elementary, David Wheeler left work and drove 100 mph through blinding rain and gusting wind to find his 8-year-old son, Gabriel. When he got to the school site, “it was like the earth was wiped clean, like the grass was just sheared off,” Wheeler said.

Eventually, he found Gabriel, sitting with the teacher who had protected him. His back was cut and bruised and gravel was embedded in his head – but he was alive. As the tornado approached, students at Briarwood were initially sent to the halls, but a third-grade teacher — whom Wheeler identified as Julie Simon — thought it didn’t look safe and so ushered the children into a closet, he said.

The teacher shielded Gabriel with her arms and held him down as the tornado collapsed the roof and starting lifting students upward with a pull so strong that it sucked the glasses off their faces, Wheeler said.

“She saved their lives by putting them in a closet and holding their heads down,” Wheeler said.

Roofs were torn off houses, exposing metal rods left twisted like pretzels. Cars sat in heaps, crumpled and sprayed with caked-on mud. Insulation and siding was smashed up against the sides of any walls that remained standing. Yards were littered with pieces of wood, nails and pieces of electric poles.

“Among the victims were young children trying to take shelter in the safest place they knew — their school,” he said Tuesday.

The town of Moore “needs to get everything it needs right away,” he added.

Monday’s tornado loosely followed the path of a killer twister that slammed the region with 300 mph winds in May 1999. It was the fourth tornado to hit Moore since 1998.

The 1999 storm damaged 600 homes and about 100 businesses. Two or three schools were also hit, but “the kids were out of school, so there were no concerns,” recalled City Manager Steve Eddy.

At the time of Monday’s storm, the City Council was meeting. Local leaders watched the twister approaching on television before taking shelter in the bathroom.

“We blew our sirens probably five or six times,” Eddy said. “We knew it was going to be significant, and there were a lot of curse words flying.”