Energy infrastructure in Oklahoma largely escaped the fury of a vicious tornado that ripped through a central Oklahoma city on Monday, though a natural gas pipeline reported some damage, companies said.

Southern Star said it had isolated most of the line segment and several receipt points would be unavailable until further notice.

Operations were unaffected at the U.S. crude futures hub in Cushing, Oklahoma, about 77 miles northeast of Moore.

“Cushing did not have any damage from the storms,” nor did it lose power, Cushing City Manager Stephen Spears told Reuters on Tuesday morning about the hub where 49.7 million barrels of crude is stored.

Valero Energy Corp said its 87,400 barrels-per-day (bpd) refinery in Ardmore, Oklahoma, about 89 miles south of Moore, was not affected by the severe weather. 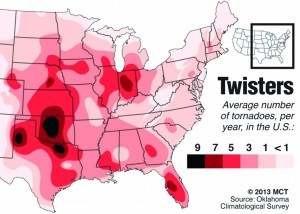 Enterprise Products Partners spokesman Rick Rainey also said he had heard of no issues with its operations in Oklahoma, which include the 400,000 bpd Seaway pipeline that carries crude from Cushing to the Texas Gulf Coast.

This article appeared in print on page D6 of the May 22nd, 2013 edition of Hamodia.