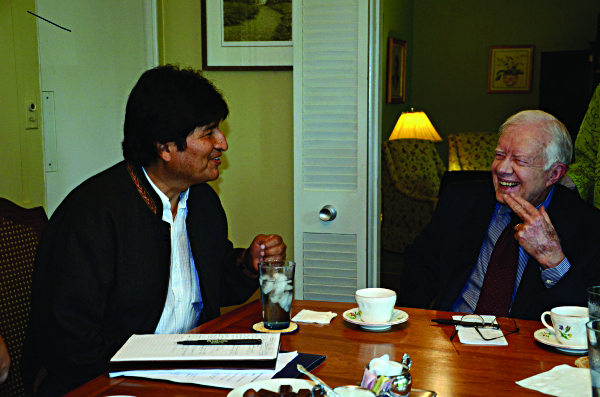 An activist considered instrumental in getting Jacob Ostreicher’s release last year from a Bolivian prison told a House foreign affairs committee hearing on Monday that more could be done by the United States to secure the Orthodox Jew from Brooklyn’s release from house arrest.

Sean Penn, a U.S. actor who has taken an interest in Ostreicher’s plight, invoked his friendship with Bolivian President Evo Morales to call for peaceful measures to be taken to ensure that Ostreicher regains the freedom he lost more than two years ago.

“I was convinced then, and am convinced today that these findings [of judicial corruption in the Ostreicher case] were received by the president [of Bolivia] with tremendous personal and human grief,” Penn said.

It was a message diametrically at odds with what the committee chairman was intent on delivering at the hearing, which was attended by Ostreicher’s wife Miriam and daughter Chaya Weinberger.

Rep. Chris Smith, the New Jersey Republican who has twice traveled to Bolivia on Ostreicher’s behalf, wanted punitive measures exacted on Bolivia for their continued incarceration of a U.S. citizen — 718 days as of Monday, by his count.

Smith said that Morales’s current visit to the United States to meet with former President Jimmy Carter in Atlanta underscores the need to pass “Jacob’s Law,” which would bar human rights abusers from U.S. shores.

“It is wrong for our government to give foreign officials and their families the privilege — and it is a privilege, not a right — to visit and study in the U.S. while those same officials are wrongfully detaining an American abroad,” Smith said.

The congressman, whose constituent is a daughter of Ostreicher, added that the Carter Center had “advised” him that Carter would raise Ostreicher’s saga during his meeting Tuesday with Morales.

“While the Bolivian media is reporting on these events [Morales’s trip],” Smith said, “I hope that they will also note that I am sending the former president the transcripts of the hearings that this subcommittee has held on the case of Jacob Ostreicher.”

Ostreicher’s predicament jumped to the fore late last year, when nearly every prosecutor, judge or government official connected to the case — 27 in all — were arrested on corruption charges.

“This international pressure,” Penn said in his testimony, “could very well be precisely what the President of Bolivia needs to be able to finally expel the malignant cancer of corruption that is killing both the Bolivian Justice System and thousands of innocent people like Mr. Ostreicher.”