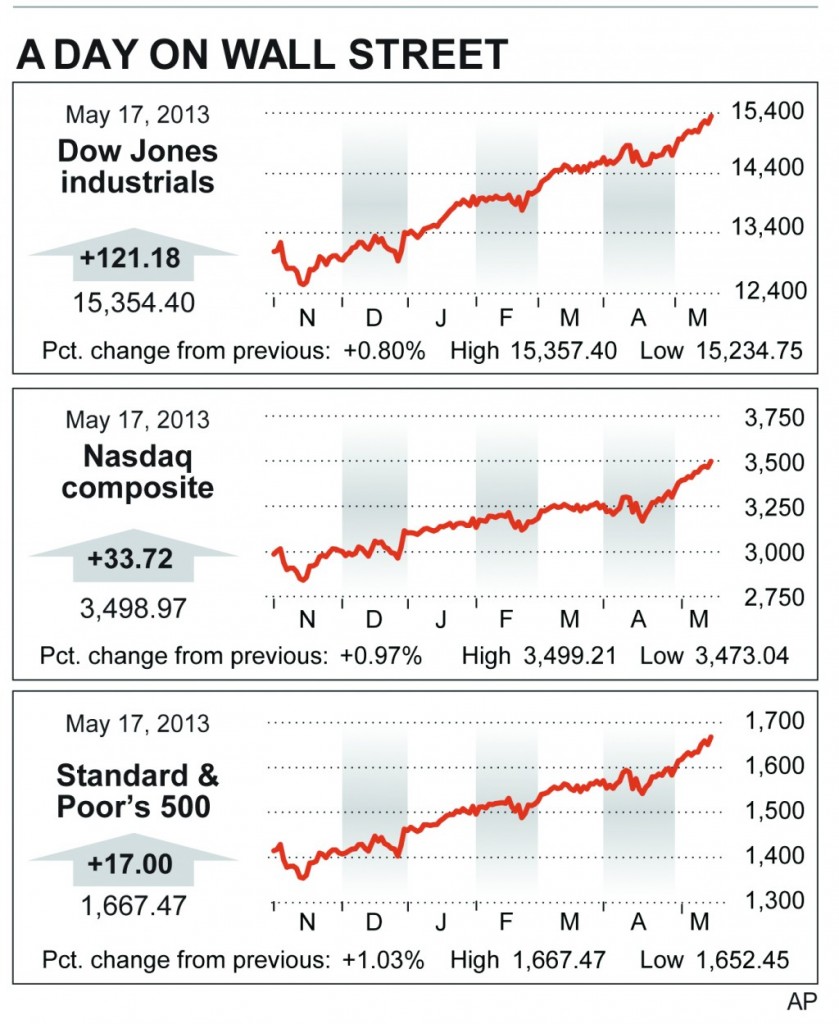 Small-company stocks rose the most, a sign that investors are taking on more risk. Two companies soared in their stock-market debuts in the latest indication that the market for initial public offerings is reviving.

A gauge of future economic activity rose more than analysts had expected, as did a measure of consumer confidence, adding to evidence that the economy is steadily recovering.

Stocks closed higher for a fourth straight week. Indexes are at record levels after surging this year on optimism about the economy and record corporate earnings. The market is also being supported by ongoing stimulus from the Federal Reserve, which is keeping long-term borrowing costs at historically low levels.

Northrop Grumman gained $3.17, or 3.2 percent, to $82.19 after the defense contractor said its board approved the repurchase of another $4 billion in stock, and that it plans to buy back a quarter of its outstanding shares by the end of 2015.

The index started higher, then drifted through the rest of the morning. The index added to its gains in the afternoon, climbing about 70 points in the last two hours of the day.

After some lackluster reports on the economy Thursday, including slowing manufacturing and an increase in applications for unemployment benefits, Friday’s reports were a tonic for investors.

The Conference Board said its index of leading economic indicators rose 0.6 percent last month after a revised decline of 0.2 percent in March. The index is intended to predict how the economy will be doing in three to six months.

The University of Michigan’s preliminary survey of consumer confidence climbed to 83.7. Economists had predicted that the gauge would climb to 76.8.

The yield, which moves inversely to its prices, has jumped since May 3 after the government reported that hiring picked up sharply in April. The note started trading that day at 1.63 percent, its low for the year.

Small stocks are doing well partly because they are more focused on the U.S., which is recovering, and don’t rely as much on sales from recession-plagued Europe, as larger companies do.

Gold fell for a seventh straight day, dropping $22.20, or 1.6 percent, to $1,364 an ounce. The precious metal is down almost 20 percent this year and has fallen out of favor as an alternative investment as the stock market has surged this year.

The demand for gold as an alternative asset is also being undermined by a recent surge in the U.S. dollar. The U.S. currency advanced against both the euro and the yen Friday. The ICE dollar index, which measures the strength of the U.S. currency against a group of six currencies, is at its highest in two years.

The Nasdaq composite climbed 33.72 points, or 1 percent, to 3,498. The technology-heavy stock index got a small boost from Facebook, which climbed 12 cents, or 0.5 percent, to $26.25 on the one-year anniversary of its initial public offering.

Facebook slumped in the first four months after its market debut on concern that it wasn’t doing enough to develop mobile advertising. Despite recovering since then, it’s still trading below its IPO price of $38.

The standout performance made the two companies the two best performing IPOs of the year. So far, 22 companies have prices stock sales in May, making this the biggest month for stock market debuts since November 2007, according to Renaissance Capital.