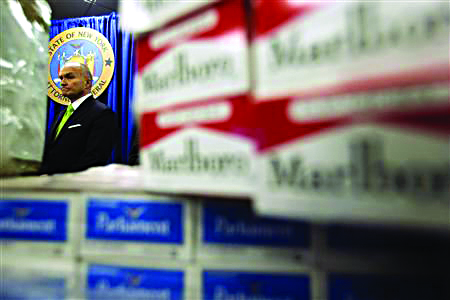 A smuggling ring that made a fortune selling more than a million cartons of untaxed cigarettes in New York may have funneled some of the proceeds to terrorist groups, including those behind the murder of Ari Halberstam, Hy”d, on the Brooklyn Bridge, authorities said Thursday.

The traffickers, all Palestinian nationals, lived modestly and had alleged links to known terrorists, including Omar Abdel-Rahman, the blind cleric serving a life sentence for a conspiracy to blow up New York City landmarks. That combination has raised concerns about where the money went.

“We know they made tens of millions of dollars, but so far we’ve only found a fraction of that,” state Attorney General Eric Schneiderman said, announcing enterprise corruption and other charges against 16 people, all Palestinian immigrants.

A yearlong investigation found that the Ramadans and other suspects formed a distribution chain that began with the purchase of mass quantities of cigarettes from a Virginia wholesaler. The cigarettes were hidden in a public storage facility in Delaware, where distributors picked up about 20,000 cartons a week for sale at markets throughout New York City and at grocery stores in upstate New York.

Schneiderman and city Police Commissioner Ray Kelly told reporters that similar schemes in the past have raised money for Hamas and Hizbullah.

“This is not the end of our investigation,” he added. “We are following the money. We will work to track it down wherever it went.”

According to Kelly, one of the men previously ran a business in the 1990s that was partly bankrolled by the blind sheik; another was a “confidant” of Rashid Baz, the Lebanese immigrant convicted of the deadly 1994 shooting assault on a van full of Lubavitcher chassidim on the Brooklyn Bridge, which killed Halberstam; and a third lived in the same Brooklyn apartment as the secretary of Musa Abu Marzook, a key Hamas fundraiser.

Neighbors of the Ramadans in Ocean City, Md., described seeing a dozen or more federal agents and NYPD officers show up at the brothers’ homes and bring one man out in handcuffs. One officer turned to them , “Have you ever seen a million dollars in cash?”

The scheme cost the state an estimated $80 million in tax revenue.