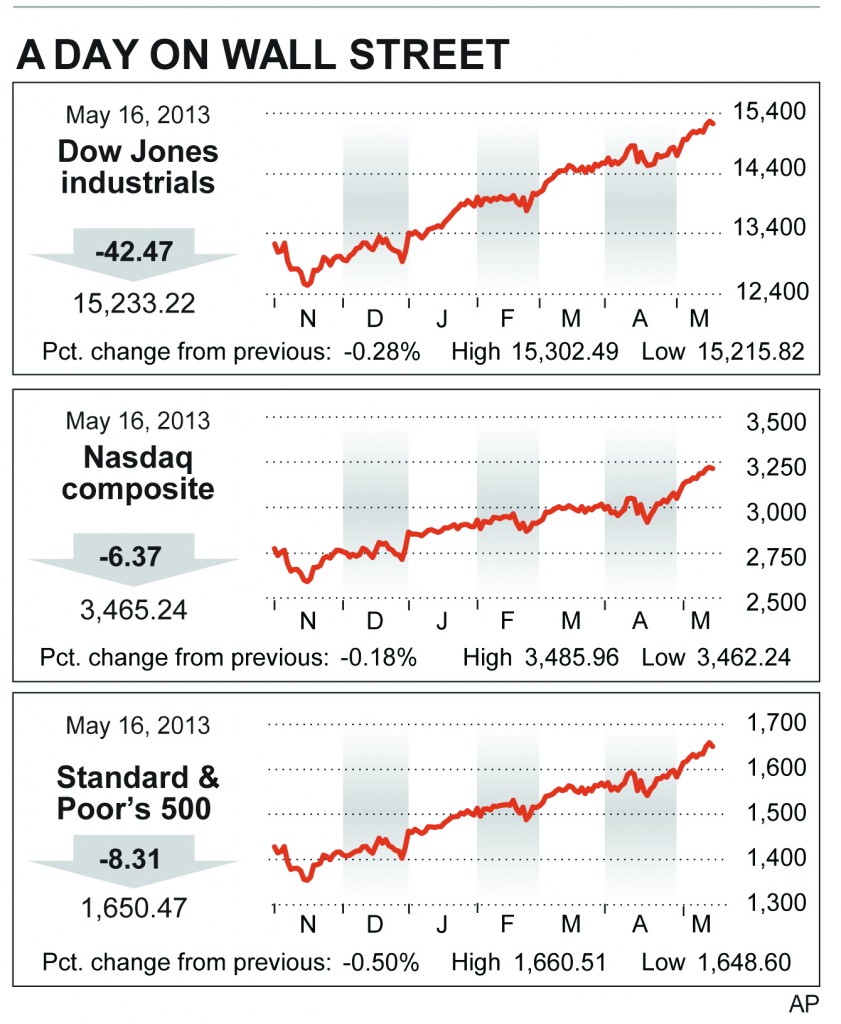 Signs of a slowing economy combined with comments from a Federal Reserve official helped pull the stock market down Thursday.

There was plenty of discouraging news. Applications for unemployment benefits rose last week and manufacturing slowed in the mid-Atlantic region. Wal-Mart sank after warning that its customers were spending less at its stores.

“We’ve had such a tremendous run,” said J. J. Kinahan, chief strategist at TD Ameritrade. “On a day with a bunch of disappointing data, you’re looking for some good news to hold on to.”

The manufacturing report from the Philadelphia branch of the Federal Reserve sent bond prices up and turned stocks lower in morning trading. The stock market recovered before noon, then spent most of the day with slight gains until shortly after 3 p.m.

That’s when news crossed that John Williams, head of the Federal Reserve’s San Francisco branch, told an audience that the Fed could end its bond-buying program this year. But Williams’ comments made clear that the Fed would only curtail its stimulus effort when the economy looked strong enough. Within the last hour of trading, the S&P 500 dropped 5 points.

Cisco jumped 13 percent, or $2.68, to $23.89. The network-equipment maker turned in quarterly results late Wednesday that beat analysts’ expectations, with the help of better revenue from the U.S. and emerging markets. Cisco’s performance is often considered a gauge of the technology industry’s strength, and tech stocks fared better than the rest of the market Thursday. Technology was the only one of the 10 industry groups in the S&P 500 index to close higher.

Wal-Mart fell 2 percent. The world’s largest retailer turned in weaker sales and a dim forecast for profits. The company blamed bad weather and delayed tax refunds for earnings and sales that fell short of what analysts had expected. Wal-Mart’s stock lost $1.36 to $78.50.

Companies have reported record quarterly profits this earnings season. Seven of every 10 in the S&P 500 have trumped analysts’ earnings estimates, according to S&P Capital IQ. Earnings have climbed 5 percent over the year before.

But revenue has looked weak: Six out of every 10 companies in the S&P 500 have missed forecasts, and revenue has edged up just 1 percent. Without higher sales, companies are getting more of their profits from laying off staff and other cost-cutting moves.

The Philadelphia branch of the Federal Reserve reported that manufacturers in the region said business conditions slumped this month. Orders for manufactured goods and shipments have been weak.

In Washington, the Labor Department reported that the number of Americans seeking unemployment benefits rose last week to 360,000. That suggests companies are laying more people off, just one week after applications for benefits hit a five-year low.

The yield on the 10-year Treasury note dropped to 1.88 percent from 1.94 percent late Wednesday. It’s a sign that traders are shifting money into lower-risk investments like U.S. government debt.

Among other companies making moves:

• Tesla Motors jumped 9 percent, or $7.41, to $92.25. The electric-car maker it said it aims to raise $830 million from the sale of stocks and convertible bonds to pay off a loan from the federal government. Tesla has surged 65 percent since May 8, when it announced its first profitable quarter.

• Semiconductor maker Advanced Micro Devices plunged 13 percent, the biggest drop in the S&P 500 index. A Goldman Sachs analyst advised investors to sell AMD, arguing that its shares had become too expensive. AMD had shot up 83 percent this year before Thursday’s plunge on hopes that the company can cash in on making chips for video game consoles. AMD lost 55 cents to $3.83.

• Amyris fell 3 percent after a law firm filed a class action suit against the specialty-chemicals company, saying it misled investors about its production capabilities. Amyris lost 11 cents to $3.09.