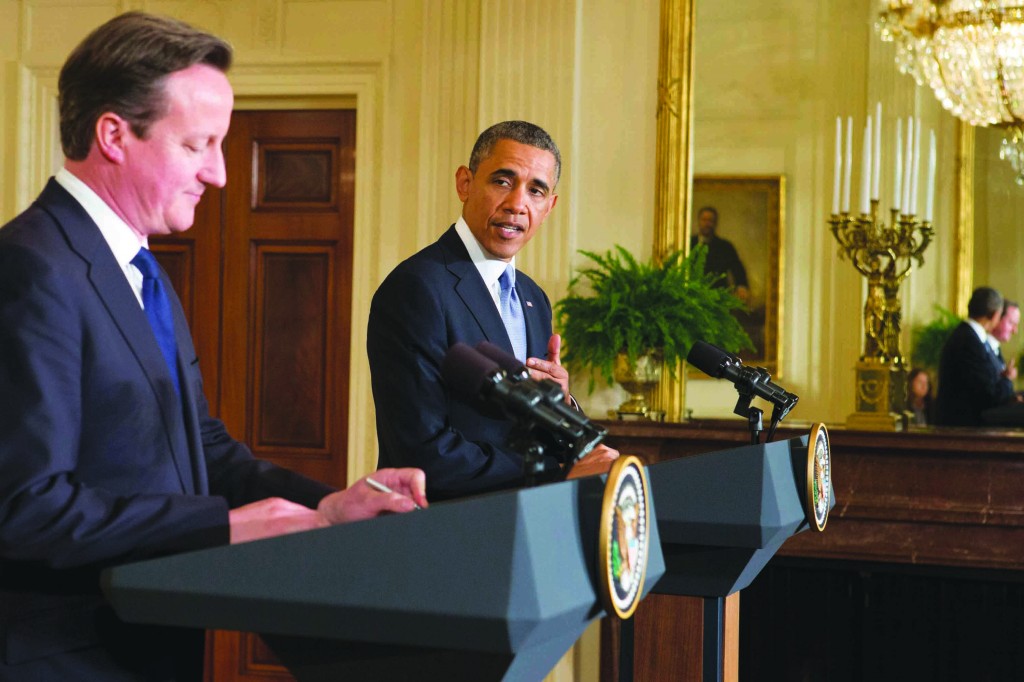 President Barack Obama on Monday called reports that the Internal Revenue Service targeted conservative groups “outrageous” and said anyone responsible should be held accountable. He pushed back strongly against fresh Republican criticism of the administration’s handling of last year’s deadly Benghazi attacks, calling it a political “sideshow.”

The president was dogged by the persisting political controversies as he tended to diplomatic duties during a visit with British Prime Minister David Cameron.

Obama acknowledged that people are properly concerned about acknowledgements from the IRS that conservative political groups were targeted during the 2012 campaign to see if they were violating their tax-exempt status. But he angrily dismissed continued questions over September’s insurgent attack in Libya that killed Ambassador Chris Stevens and three other Americans.

“There’s no there there,” Obama said. “The fact that this keeps on getting churned up, frankly, has a whole lot to do with political motivations.”

Cameron and Obama had a meeting in the Oval Office before appearing before the media in the East Room of the White House to take questions.

The two leaders said they had discussed several pressing international issues, including the Mideast peace process, trade and preparations for a coming summit of the world’s leading industrial nations in Northern Ireland. They said they were committed to working together to keep pressure on Syria’s President Bashar Assad and assist the opposition in a protracted civil war. Cameron said, “There is no more urgent international task.”

Domestically, Obama is facing heat at the start of his second term on several fronts.

The Internal Revenue Service, an independent agency in the Treasury Department, apologized Friday for what it acknowledged was “inappropriate” targeting of conservative political groups. The agency blamed low-level employees, saying no high-level officials were aware.

But a draft of an inspector general’s report obtained by The Associated Press says senior IRS officials knew agents were targeting tea party groups as early as 2011. The Treasury Department’s inspector general for tax administration is expected to release the final report this week after a yearlong investigation.

The portion of the draft report reviewed by the AP does not say whether anyone in the Obama administration outside the IRS was informed of the targeting.

Obama said he first learned about the matter from news reports last week.

“If in fact IRS persons engaged in the kind of practices that have been reported on and were intentionally targeting conservative groups, then that’s outrageous and there’s no place for it,” Obama said. “And they have to be held fully accountable.”

He said the IRS must operate with absolute integrity and apply laws without partisanship.

“I’ve got no patience with it,” he said. “I will not tolerate it and we will find out exactly what happened.”

Obama’s response on Benghazi comes after disclosure last week of emails that the administration had turned over to congressional investigators. They show that political considerations influenced the talking points that U.N. Ambassador Susan Rice used five days after the Sept. 11 assault, with State Department and other senior administration officials asking that references to terror groups and prior warnings be deleted.

The White House has insisted that it made only a “stylistic” change to the intelligence agency talking points from which Rice suggested on five Sunday talk shows that demonstrations over an anti-Islamic video devolved into the Benghazi attack.

Obama said the focus should be on making sure that diplomats serving around the world are adequately protected, which he acknowledged those in Benghazi were not.

“The whole issue of talking points, frankly, throughout this process has been a sideshow,” Obama said.

“If anybody out there wants to actually focus on how we make sure something like this doesn’t happen again, I’m happy to get their advice and counsel,” Obama said.