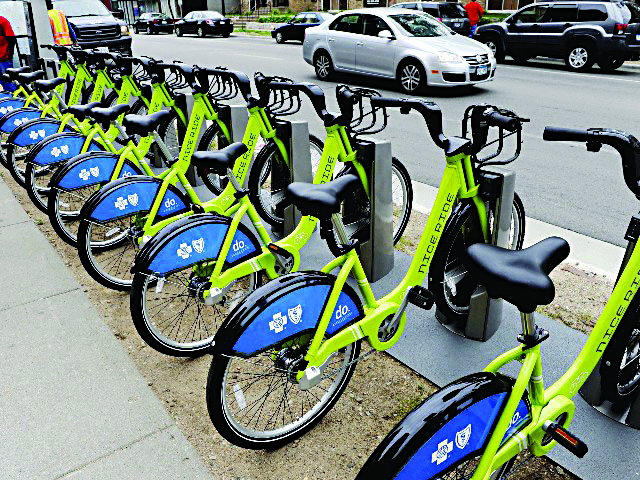 The Big Apple is finally rolling out its bicycle-sharing program — the biggest in the country.

After years of planning, New York City transportation officials offered the bikes for a media test run on a warm, sunny Sunday in Brooklyn.

More than 9,000 people who have signed up for bike-sharing will be able to ride on May 27 —Memorial Day, when streets are quieter — and the program will open to anyone starting June 2.

Riders with a $95 annual membership get an unlimited number of rides for 45 minutes at a time, and don’t have to return bikes to the same kiosk. Any rider 16 or older may unlock a bike using a credit or debit card, at $9.95 for 24 hours of unlimited rides lasting 30 minutes each. A seven-day pass costs $25.

Six thousand sturdy, blue three-gear bikes will be locked up after each use at 330 locations in Manhattan and Brooklyn. If the plan works well, the program is eventually to expand to 10,000 bikes and 600 docking stations that will also include Queens.

Use of helmets is recommended but not required.

“I haven’t biked since I was 13, and I was avoiding buying a bike, so this is a really good opportunity to find out how it’ll go,” said Jessica Sheridan, 36, an architect who lives on Manhattan’s Upper West Side and is a bike-sharing program member.

Sheridan said she’s concerned about cycling in traffic-congested midtown Manhattan. Despite the city’s 700 miles of bike lanes, bikers still have to contend with unruly drivers and jay-walking pedestrians.

In New York City, there were 369 severe injuries for bicyclists reported in 2011, with 22 fatalities, according to city data.

Critics say bike-sharing — already successful in cities including London, Paris and Washington — takes up parking space with its large gray docking stations. But supporters say sharing bikes allows people to move easily around the city without worries about theft, or having to bring a bike back, since it can be left at any docking station.

Mayor Michael Bloomberg says biking decreases the number of drivers on the road and encourages a healthy lifestyle. The city expects the system to turn a profit, to be split between the city and the operator.

The city’s Department of Transportation is overseeing the launch of the program, dubbed Citi Bike, and privately funded with a $41 million sponsorship from Citibank and an additional $6.5 million from MasterCard.

It took nearly two years and 400 community meetings to pick locations for the kiosks.

The world’s largest public bike-sharing system is in Hangzhou, China, where it’s estimated there are 69,500 bikes and close to 3,000 docking stations.