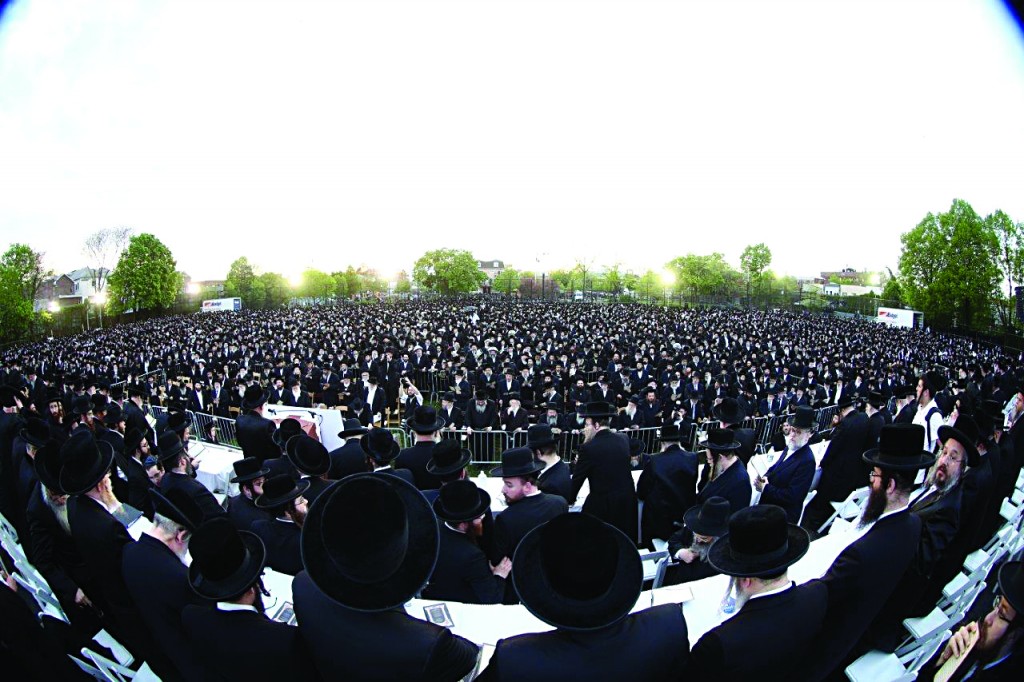 On relatively short notice and with only a minimum of publicity, approximately 10,000 men assembled for an outdoor gathering last Thursday, Erev Rosh Chodesh Sivan, in Boro Park to hear guidance and words of chizuk about the appropriate use of technology.

The large 18th Avenue Park was filled to capacity for the event, which marked exactly one year since Kinus Klal Yisrael, when approximately 40,000 Jews gathered at Citi Field Stadium, and thousands more assembled at neighboring Arthur Ashe Stadium. Every major kehillah in Boro Park was represented at the Thursday night Yiddish-language gathering, including some who had chosen not to participate in last year’s Kinus Klal Yisrael.

“Citi Field changed the whole way I looked at internet,” one participant told Hamodia. “Thursday night’s asifah gave me much needed chizuk to continue. The fact that so many Rebbes and Rabbanim came proved that there is a clear consensus on this issue. The fact that so many thousands of Boro Park residents came, showed us all that the broad tzibbur is fully committed to heeding daas Torah.”

One of the most striking moments of the evening, which was organized by Ichud HaKehillos LeTohar HaMachane, was a declaration by Harav Tzvi Heilpern, Viener Dayan in Boro Park, who had been chosen by the Rabbanim and Dayanim of the community to represent them.

After speaking at great length about the destruction caused by inappropriate usage of the internet, Harav Heilpern announced, in the name of the Rabbanim of Boro Park, that a filter must be placed on all internet devices.

While the Rabbanim can’t compel a resident to place a filter, the community has a right to demand that someone with unfiltered internet access should not serve the spiritual needs of the public in any way. If he is a sofer, the mezuzos, tefillin and sifrei Torah he writes, or the batim he produces, will not be used; if he is a shochet, the public will choose to not to eat his meats, the Dayan said. As the huge crowd listened in absolute silence, the Dayan continued by announcing that such an individual will not be permitted to serve as baal korei, nor will he be allowed to lead the tefillos before the amud.

“A line was drawn in the sand,” one longtime Boro Park resident, who spoke on the condition of anonymity, told Hamodia Sunday. “That single statement sent an enormously powerful message, and the ripple effect is going to be felt for years to come.”

He noted that the yeshivos and girls’ schools are taking increasingly strict steps to ensure that parents adhere to the requirements for filtering.

“It isn’t only a condition for accepting new students. Parents are getting letters saying that their children won’t be allowed to attend school or yeshivah next year without a certificate from a vaad or a Dayan affiliated with the mosdos, that states that internet usage is limited to an as-needed basis, and the best possible filter is in place.”

In his remarks, Harav Heilpern also stressed that a solution must be found for the hundreds of would-be talmidim and talmidos who aren’t being accepted to the local mosdos. “The internet will welcome them with open arms,” he warned.

The Rav of Antwerp, Harav Aharon Schiff, who came from Belgium to address the event, did so with divrei Torah and chizuk. He interspersed his remarks with personal anecdotes, and emphasized how using a filter does not in any way interfere with running a business.

The Zmigrader Rebbe, shlita, led the assembly with the recital of the Tefillas HaShelah, and Harav Dovid Olewski, shlita, Rosh Yeshivas Ger, electrified the crowd with his remarks.

In a fitting climax to the evening, the Rachmastrivka Rebbe, shlita, led the recital of Kabbalas Ol Malchus Shamayim.

Similar mass gatherings were held in Monsey and Lakewood. Monsey’s event was held in the Provident Bank Park, a baseball field where there are 10,000 seats. All seats were sold ahead of the event. The Vizhnitz-Monsey Rebbe, shlita, attended, and led the crowd in Kabbalas Ol Malchus Shamayim.