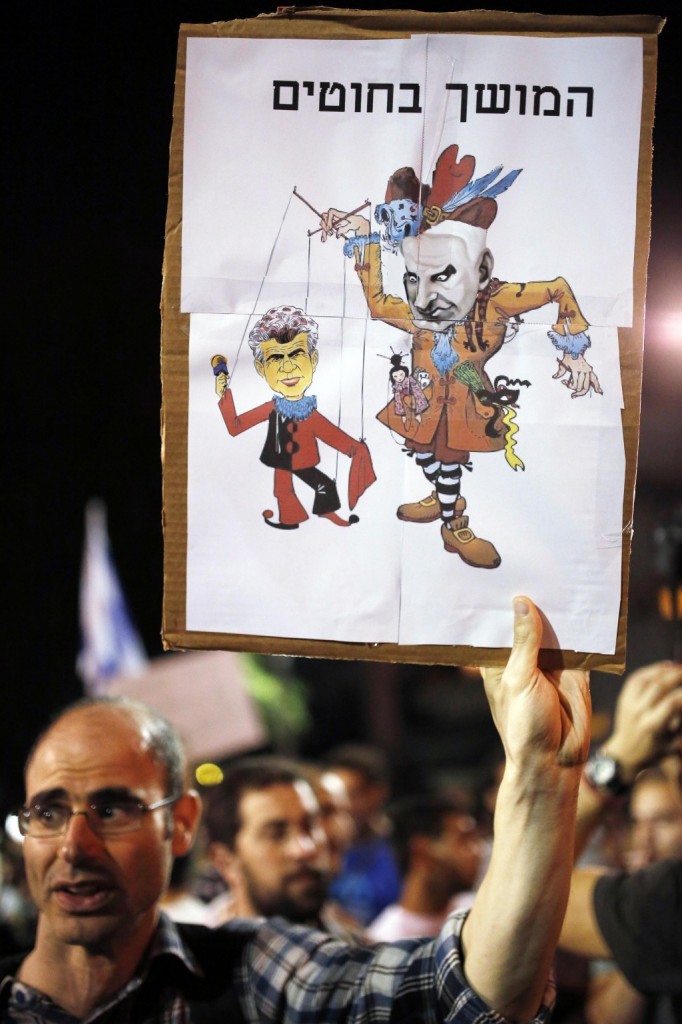 Thousands of Israelis marched in protest against Finance Minister Yair Lapid’s austerity budget on Motzoei Shabbos in street scenes reminiscent of the social protest of two summers ago.

Crowds turned out in Tel Aviv, Haifa, Yerushalayim, Ashdod and Rishon L’Tzion to denounce Lapid for having betrayed the cause of the middle class, which he championed during the election campaign just a few months ago. The turnout was estimated at a combined total of about 15,000.

The former journalist and media favorite was jeered at as a puppet of Israeli Prime Minister Binyamin Netanyahu and the wealthy elites. In a parody of his party’s name, Yesh Atid (literally, “There is a future”), there were signs saying Ein Yatid (“There’s no future with Lapid and Bibi”).

One of the organizers of the 2011 protests, Tel Aviv resident Daphni Leef, figured prominently in this one too. “Instead of a murderous budget that will raise taxes and the income tax paid by workers, self-employed housewives, and the elderly, the people demand a stop to the free-for-all for tycoons,” she declared.

Although the numbers were small compared to the hundreds of thousands who filled the streets in 2011, organizers said it was just the beginning.

Lapid’s release of the proposed budget last week has triggered a furious reaction from various quarters.

Guy Rolnick, editor at The Marker, published a scathing attack in which he charged, “The budget constitutes a violent assault on anyone without connections. It doesn’t deal with those who have gorged themselves or those half million individuals with old-line tenure and pension benefits. It doesn’t deal with the friends of Ofer Eini, the Histadrut labor federation chief, or those others who benefit from the public and private monopolies. The banks will continue to live high off the hog while simple housewives pay stiff taxes.

“If the public only knew how much corruption, idleness and ossification there are in parts of a public sector meant to serve the underprivileged, it would take to the streets over this budget,” Rolnick continued. “Instead of finding the necessary spending cuts among those very wealthy with their giant vested pensions from other money pots and from 150 billion shekels in wasted spending, they are going after the common citizen.”

Similarly, an analysis in Haaretz noted, “Focusing on income tax, VAT, child allowances and other clauses will mainly hurt the middle class. Such measures don’t bother the rich, and the poor don’t earn enough income to be taxed.

“However, he did not take much from corporations and their shareholders, from groups that have budgetary pensions or extraordinary conditions — the defense establishment for example, the Israel Electric Corporation, the Israel Airports Authority, the banks and the monopolies. Lapid rejected proposals to cancel tax exemptions, for example, on continuing education funds (kranot hishtalmut), held mainly by people with means.”

Senior columnist Nachum Barnea called attention to the disturbing fact that for all the talk of economic change during the last elections, little was said about a budget gap that was not long afterward revealed to be huge — some 30 billion shekels — and which threatens the country’s economic stability.

“Voters went to the polls believing in the self-congratulations of Netanyahu and Steinitz that the economic situation was wonderful,” recalled Barnea.

In the meantime, there haven’t been any global financial crises, and no intifada has materialized; on the contrary, conditions are relatively unchanged. A budget deficit that prior to the election was given no serious treatment was suddenly discovered to be a crisis. “Lapid, who promised to prevent a tax increase, has instead proposed to raise income tax by 1.5 percent.”

Barnea quoted Lapid as saying that while things will get tough, they will be much better in a couple of years. But, he asked, “why should we believe him? Did he fulfill his promises of three and a half months ago? No. Did he stand behind his initial decisions as finance minister? No. Not against the teachers, not against the ports unions, not against the pension funds….”

He was careful not to excuse Netanyahu, either, pointing out that during the elections he explicitly promised not to raise taxes.

Conference of Presidents heads Richard Stone and Malcolm Hoenlein stated, “The addition of the VAT would add significantly to the cost for tourists and will, we fear, cause many to reconsider, postpone, or even cancel trips to Israel. In addition, it will negatively impact important programs like America’s Voices in Israel, Taglit-Birthright, missions and conferences.”

Citing the “central role [tourism plays] in building ties between Jewish and non-Jewish communities around the world and Israel,” Stone and Hoenlein wrote the Israeli leaders that not only would this relationship be harmed by the imposition of VAT, but that the tax would “harm not only those who work directly in the tourism industry, but also those who are employed in supporting industries — suppliers, merchants and others.”

While recognizing the “need for additional funds and for all to contribute,” the letter urged Israel’s leadership to find “other sources” that the authors believe will not damage Israel’s tourist sector.