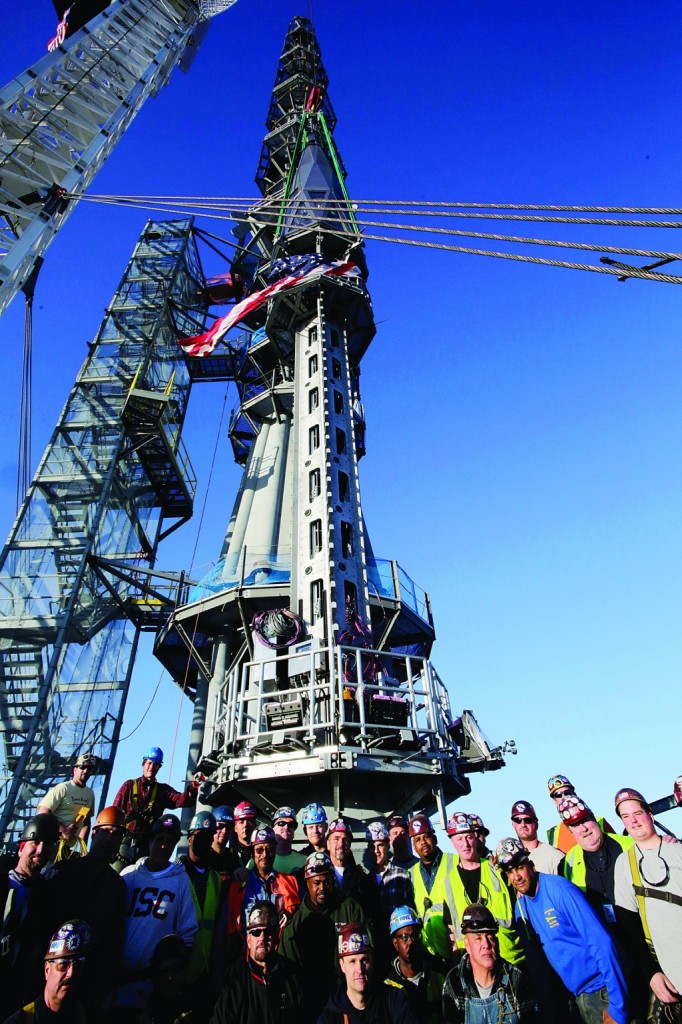 The World Trade Center’s rebirth has long revolved around creating a centerpiece of unsparing symbolism: a skyscraper 1,776 feet tall, its height an homage and a bold statement about looking forward.

The new 1 World Trade Center reached that height with the lowering of a silvery spire from a crane on Friday, officially taking its place as a signature of the city’s skyline and, with some argument, the nation’s tallest tower.

After years of waiting for and watching the building rise, the moment resonated for many, from workers who looked on from its roof to visitors on the ground.

“It’s a pretty awesome feeling,” Juan Estevez, a project manager for Tishman Construction, said from a temporary platform on the roof of the tower where workers watched with shouts of joy as the final two sections of the 408-foot, 758-ton spire were installed.

Even — or perhaps especially — for New Yorkers who have followed the World Trade Center rebuilding after the Sept. 11, 2001, terror attacks destroyed the Twin Towers, the spire’s completion was an impressive milestone.

“I was giving them at least five more years to be done,” said Gil Areizaga, a Manhattan resident who took out-of-town cousins to see the building Friday.

The skyscraper, expected to open next year, is the focal point among the buildings designed to replace the fallen Twin Towers. When master plans for the site were unveiled in December 2002, architect Daniel Libeskind envisioned the tower “restoring the spiritual peak of the city, creating an icon that speaks to our vitality in the face of danger and our optimism in the aftermath of tragedy.”

With its spire reaching 1,776 feet, an echo of the nation’s founding year, it is the tallest skyscraper in the U.S. and third-tallest in the world, although building experts dispute whether the pinnacle is an antenna, a crucial distinction in measuring the building’s height.

The Council on Tall Buildings and Urban Habitat, a Chicago-based organization considered an authority on such records, says an antenna is simply something added to the top of a tower that can be removed. By contrast, a spire is something that is part of the architectural design.

If it didn’t have the spire, 1 World Trade Center would be shorter than the Willis Tower in Chicago, which stands at 1,451 feet and has the title of tallest building in the U.S., not including its antennas. The world’s tallest building, topping 2,700 feet, is in Dubai.

The Twin Towers were about 1,360 feet tall, not including the antenna on one of them.

The spire at 1 World Trade Center will serve as a media broadcast antenna. It will feature an LED-powered light that will be visible dozens of miles away, said Scott Rechler, vice chairman of the Port Authority, which owns the lower Manhattan trade center site. The light, which will change colors, will be activated in the next few months.

“It will be a beacon of hope, just like the Statue of Liberty,” he said.