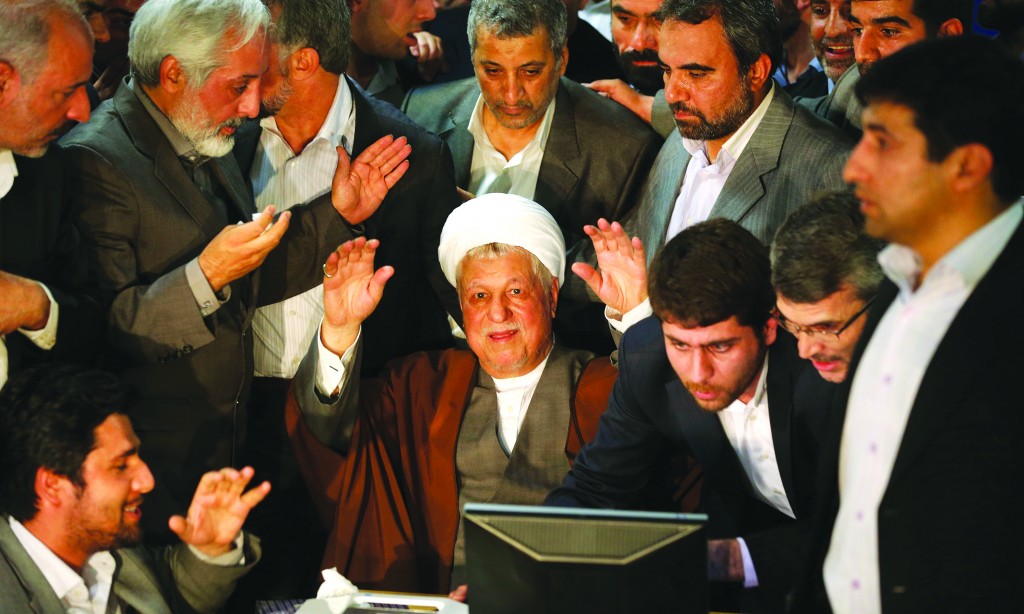 Former president Akbar Hashemi Rafsanjani threw himself into Iran’s election race on Saturday as a flurry of heavyweight candidates rushed to beat the registration deadline in the most unpredictable contest for decades.

Iranian media reported that Rafsanjani, a relative moderate, had registered for the June 14 presidential election with just minutes to spare. His candidacy radically alters what was previously seen as a contest between rival conservative groups.

The former president could scupper the hopes of “Principlists” loyal to Supreme Leader Ayatollah Ali Khamenei, who are aiming to secure a quick and painless transition and paper over the deep fissures between the opposing camps.

Rafsanjani, 78, who was president from 1989 to 1997, is expected to draw some support from reformists because he backed the opposition movement, whose protests were crushed after the last, disputed election in 2009.

The election comes at a critical moment, with Iran reeling from international sanctions over its disputed atomic program and facing the threat of attack by Israel if it crosses a “red line” toward acquiring a nuclear weapon. Tehran strenuously denies it wants an atomic bomb.

A vast field of more than 400 candidates have thrown their names into the ring as potential successors to outgoing president Mahmoud Ahmadinejad, who has long been at odds with the supreme leader.

Shortly before Rafsanjani’s announcement, Saeed Jalili, a hardline conservative who is seen as close to Khamenei and has led rounds of so far unsuccessful nuclear talks with world powers, entered his name as a candidate.

Soon afterward, Esfandiar Rahim Mashaie, an aide to Ahmadinejad and a man viewed with intense distrust by conservatives, registered for the race, gripping Ahmadinejad’s hand as the two flashed peace signs for photographers.

Khamenei’s camp sees Mashaie as leading a “deviant current” that seeks to set aside clerical influence in favor of a more nationalistic doctrine.

The vote is the first since Ahmadinejad’s disputed re-election four years ago, when mass “Green movement” protests erupted after the defeat of reformist candidates Mirhossein Mousavi and Mehdi Karoubi. Dozens were killed in the worst unrest since the 1979 revolution.

The outcome of next month’s contest will signal the extent of Khamenei’s control at the summit of power in the Islamic Republic.

It will also show whether he feels the need to reach out to opposition groups and whether the reformists are capable of making a comeback.