Treasury Secretary Jacob Lew’s loopy signature is showing signs of improvement as he gets ready to affix his “Jacob Lew” to the nation’s currency.

President Barack Obama joked in January, when he nominated Lew for the Treasury post, that he had never noticed before how illegible Lew’s signature was. Lew served as Obama’s chief of staff and also as director of the Office of Management and Budget before taking the Treasury job.

Lew’s scrawl consisted of a series of loops that bore no resemblance to his name.

“Jack assured me that he is going to work to make at least one letter legible in order not to debase our currency,” the president said during the White House ceremony where he announced the nomination.

After just two months in the Treasury job, there are signs Lew’s practice is paying off. All the letters of Lew’s last name could be made out in his signature on the annual report of the Financial Stability Council, which came out in late April.

Lew is still a long way from winning any penmanship honors, but Treasury officials say stay tuned. Lew still has time for more improvement before his name goes on the nation’s currency. That is expected to occur later this year. 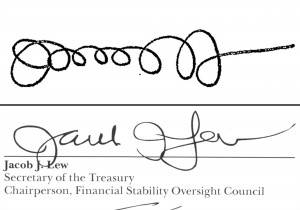 This article appeared in print in the May 9th, 2013 edition of Hamodia.