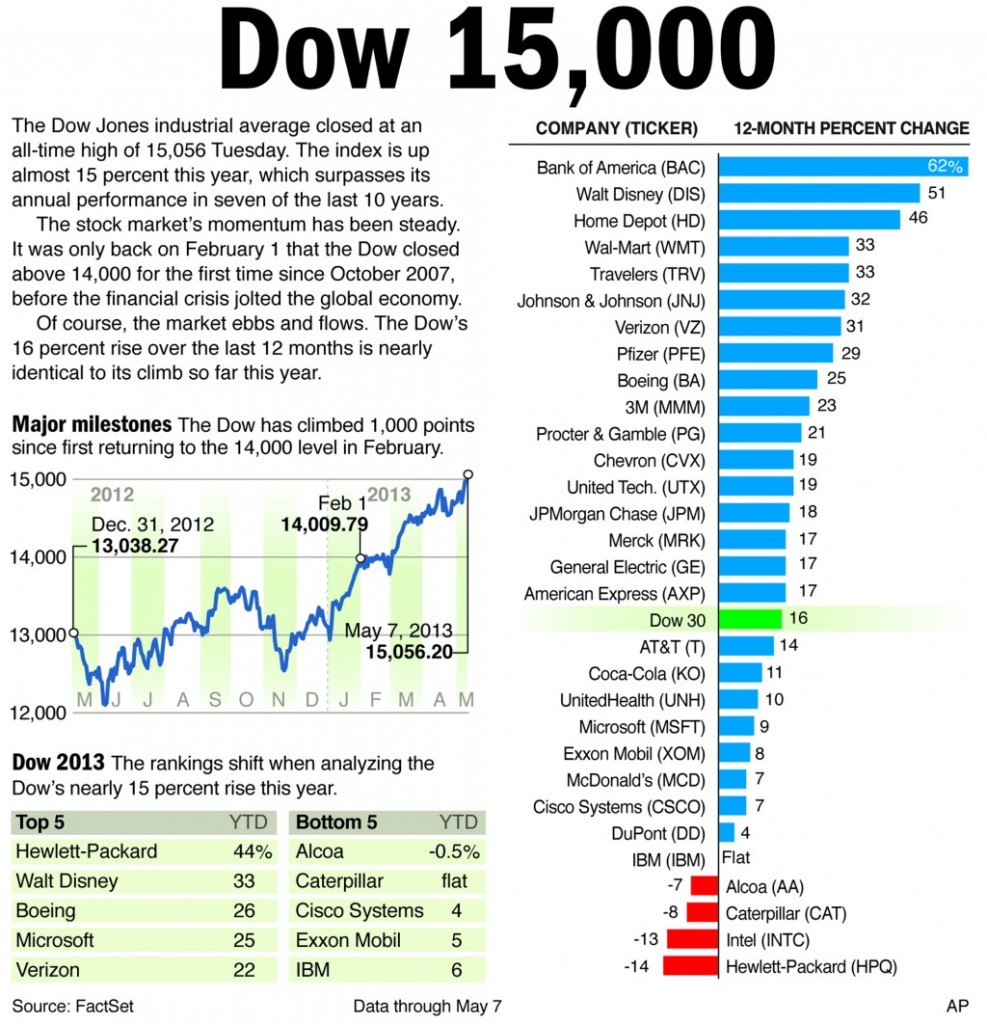 Just two months after recovering the last of its losses from the financial crisis, the Dow Jones industrial average charged higher Tuesday, closing above 15,000 for the first time.

It was another milestone in the market’s epic ascent of 2013. Good economic reports, strong corporate earnings and fresh support from central banks have eased investors’ concerns about another economic slowdown. Wall Street has climbed almost 15 percent since Jan. 1.

“The thing that’s been driving stocks is rising confidence,” said James Paulsen, chief investment strategist at Wells Capital Management. “Economic growth, job creation and the housing market have been better than expected.” News of stronger hiring over the past three months briefly propelled the Dow over 15,000 on Friday, but it ended the week below that mark.

Wall Street followed Japanese and European markets higher after they responded to good news about central bank stimulus and the German economy. In the U.S., the market got a lift from higher quarterly profits at DirecTV and watchmaker Fossil.

The gains piled up with the growing realization among investors that the traditional threats to a rising market — higher interest rates, falling profits, a possible recession — are unlikely to appear anytime soon. With interest rates near record lows, they see few other places to put their money.

In a round of interviews on Monday, investor Warren Buffett said the stock market looked “reasonably priced” even after its surge. But, Buffett added, people pay too much attention to markets reaching new highs. They ought to pay attention when markets hit new lows.

Record-high profits have also encouraged investors who fretted that slumping sales would lead to shrinking earnings. More than 400 of the S&P 500 companies have turned in first-quarter results, and more than seven out of 10 have beaten Wall Street’s earnings expectations, according to S&P Capital IQ. Those analysts estimate that earnings increased 5 percent in the first quarter and will pick up their pace through the rest of the year.

Fossil, a maker of watches and handbags, was among the companies reporting earnings Tuesday. Its stock leapt $8.92, or 9 percent, to $107.88 after the company said higher sales lifted its earnings.

For the Dow, it was the 17th straight Tuesday of increases. The only day of the week with a longer series of consecutive gains is Wednesday, which logged a streak of 24, Detrick said.

Japanese stocks surged, pushing the Nikkei above 14,000 for the first time in nearly five years. The Nikkei has jumped 36 percent this year after the Bank of Japan announced a new aggressive monetary policy to get the country out of its two-decade stagnation.

Detrick said he was particularly encouraged by the resurgence in smaller stocks, which suggested a broad recovery beyond larger companies. The Russell 2000 index of small companies has gained 14 percent this year.

In the market for U.S government bonds, the yield on the 10-year U.S. Treasury note edged up to 1.78 percent from 1.76 percent in late Monday trading. Optimism over the U.S. economy has yanked the yield up over the past week, as traders shift money out of the safety of the Treasury market. The yield sank to its low for the year, 1.63 percent, last Thursday.