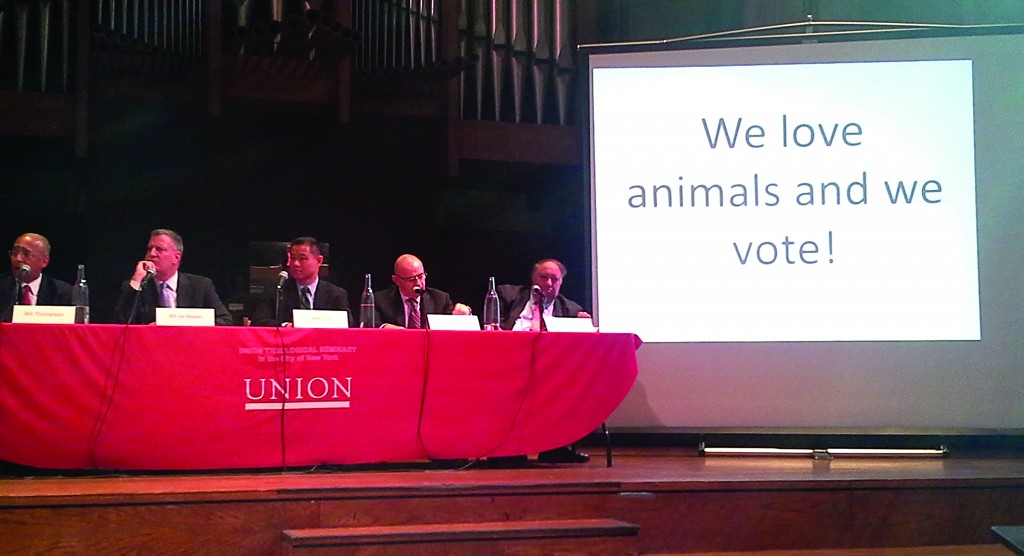 The latest in the mayoral debate forums was for the dogs.

The five contenders for the city’s highest office competed with each other Monday on who saved more cats or which animal was the noblest. It was a pitch to the carnivorous voting public.

John Catsimatidis, the only Republican to attend the debate, claimed to have once called the fire department to rescue his daughter’s cockatoo. Bill Thompson, the former city comptroller, said he owned two rescued cats. And former City Councilman Sal Albanese insisted that his mother-in-law’s life was extended because of her chihuahua.

Catsimatidis earned a roar of boos by the crowd’s animal lovers for suggesting that carriage horses deserve an honorable retirement in a zoo. City Comptroller John Liu did not even get that far. He was sent to the doghouse by the audience for backing a bill that would reform, but not do away with, carriage horses on Manhattan streets.

A little solemnity managed to creep into the levity, though, particularly when it came to attacking the frontrunner, Council Speaker Christine Quinn. That was easy, since Quinn did not make an appearance.

The Manhattan forum was sponsored by the anti-Quinn New Yorkers for Clean, Livable and Safe Streets — or NYCLASS — and moderated by former Republican mayoral candidate Tom Allon. But the crowd-driven panel inevitably turned back to the issues of the day.

“I believe the horses provide a king of ambiance,” Catsimatidis said at one point, before he was drowned out by boos.