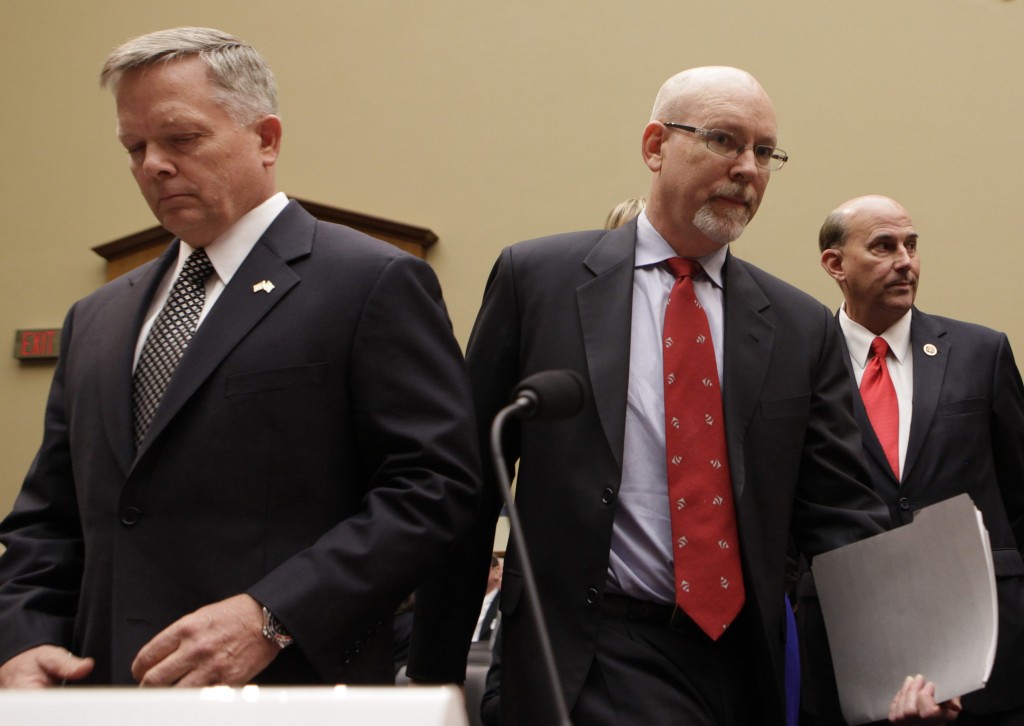 A former top diplomat in Libya on Wednesday delivered a riveting minute-by-minute account of the chaotic events during the deadly assault on the U.S. diplomatic mission in Benghazi last September, with a 2 a.m. call from Secretary of State Hillary Rodham Clinton and confusion about the fate of U.S. Ambassador Chris Stevens.

In a slow, halting and sometimes emotional voice, Gregory Hicks, the deputy chief of mission who was in Tripoli, described for a House committee how a routine day on Sept. 11, 2012, quickly devolved as insurgents launched two nighttime attacks on the facility in eastern Libya, killing Stevens and three other Americans.

The hours-long hearing produced no major revelation while reviving disputes over the widely debunked comments made by U.N. Ambassador Susan Rice five days after the attacks and the inability of the U.S. military to respond quickly.

The session exposed bitter partisan divisions as Republicans who are pressing ahead with the investigation eight months after the attacks insist the Obama administration is covering up information and Democrats decry politicization of a national security issue.

A scathing independent review in December faulted the State Department for inadequate security at the mission, but it has not been the final word. Nor has congressional testimony from former Obama Cabinet officials and military leaders.

In a hearing room where Republicans and Democrats furiously traded charges, the soft-spoken Hicks presented a lengthy recollection of the events and expressed frustration with a military that he argued could have prevented the second attack.

Hicks and two other State Department witnesses criticized the review conducted by former top diplomat Thomas Pickering and retired Gen. Mike Mullen, the former chairman of the Joint Chiefs of Staff. Their complaints centered on a report they consider incomplete, with individuals who weren’t interviewed and a focus on the assistant secretary level and lower.

Hicks said he was at his villa in Tripoli when he first got word of the initial attack. He listened to two messages on his cell phone and Stevens’ chilling words.

Hicks described a series of phone calls to the State Department and Libyan officials, frustrating efforts to find out what was happening in Benghazi, and a call from Clinton.

“Secretary of State Clinton called me along with her senior staff … and she asked me what was going on. And, I briefed her on developments,” he said. “Most of the conversation was about the search for Ambassador Stevens. It was also about what we were going to do with our personnel in Benghazi, and I told her that we would need to evacuate, and that was — she said that was the right thing to do.”

He recalled another phone call from the Libyan prime minister with word that Stevens was dead.

“I think it is the saddest phone call I have ever had in my life,” Hicks said.

Hicks said that shortly after he was told Stevens was dead, unidentified Libyans called Hicks’ staff from the phone that had been with the ambassador that night. These Libyans said Stevens was with them, and U.S. officials should come fetch him, Hicks said. Hicks said he believed Stevens’ body was at a hospital, but he could not be certain.

“We suspected we were being baited into a trap,” Hicks told the committee, so the U.S. personnel did not follow the callers’ instructions. “We did not want to send our people into an ambush,” he testified.

Republicans at the hearing focused on the talking points used by Rice on the Sunday talk shows in which she said the attacks appeared to be associated with demonstrations in Egypt and Libya over an anti-Islam video.

Gowdy said Rice’s comments “perpetuated a demonstrably false narrative.” Hicks, asked his reaction to the Rice’s remarks on the talk shows, said: “I was stunned. My jaw dropped and I was embarrassed.”

Hicks insisted that the second attack in Benghazi could have been prevented if the U.S. military had scrambled jet fighters or sent in a C-130 cargo plane to scare off the insurgents with a show of force. He said he learned in conversations with veteran Libyan revolutionaries that they understood decisive air power after the U.S.-led NATO operation that helped oust Moammar Gadhafi.

“The defense attache said to me that fighter aircraft in Aviano might be able to” get to Benghazi in two to three hours, Hicks said.

Democrats pointed out that this contradicted the testimony of former Defense Secretary Leon Panetta and Gen. Martin Dempsey, the chairman of the Joint Chiefs of Staff, who testified before a Senate panel on Feb. 7.

“The bottom line is this: That we were not dealing with a prolonged or continuous assault which could have been brought to an end by a U.S. military response,” Panetta testified.

Rep. Darrell Issa (R-Calif.), chairman of the Oversight and Government Reform Committee, insisted the investigation is needed despite Democratic and administration complaints.