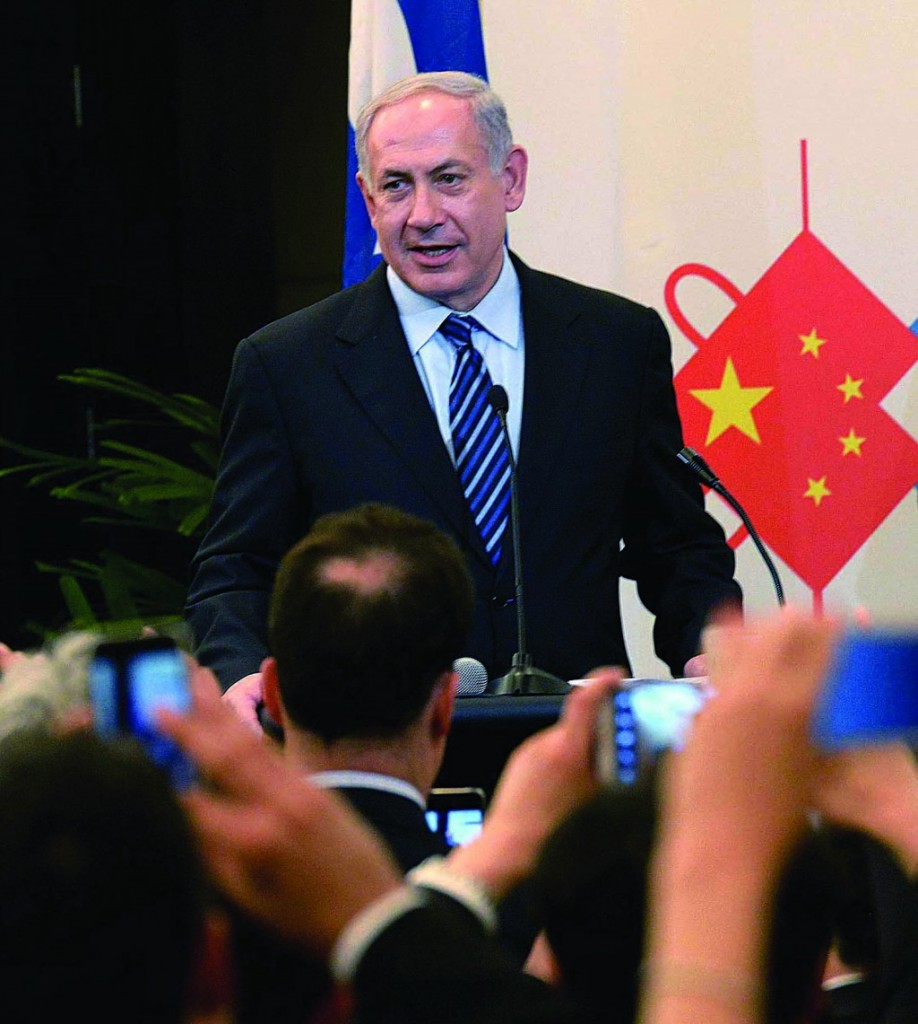 Israeli Prime Minister Binyamin Netanyahu may have gone to China on a business trip, but issues of war and peace in the Middle East cast their shadow on the very first day as China urged restraint and respect of sovereignty in Syria.

Although refraining from mentioning Israel by name, Chinese Foreign Ministry spokeswoman Hua Chunying told reporters that “we oppose the use of military force and believe any country’s sovereignty should be respected. China also calls on all relevant parties to begin from the basis of protecting regional peace and stability, maintain restraint and avoid taking any actions that would escalate tensions and jointly safeguard regional peace and stability,” Hua said.

Netanyahu did not mention the air strike during a speech to the Israeli business community in Shanghai, and later declined to answer a reporter’s question on the matter.

Standing next to a wall in a high-tech park on which were displayed the logos of the companies operating there, Netanyahu said, “We see here the logos of many of the world’s leading companies. I hope that we will soon see on this wall the logos of many Israeli companies; this is the goal — to expand bilateral economic cooperation and significantly increase Israeli exports to China.”

Later, Netanyahu addressed a group of Israeli businesspeople in China, telling them, “I represent you before the Chinese government. I want to hear from you what I need to tell them in order to help you. I know that the Chinese ascribe great importance to government backing for business and I intend to give you this backing.”

Netanyahu’s five-day visit is the first by an Israeli leader since Ehud Olmert visited in 2007, and is expected to include the signing of numerous trade deals. China is a major customer for Israeli high-technology in agriculture, engineering and military hardware and services.

While in Shanghai, Netanyahu also took note of that city’s role in Jewish history: “I visited here in 1998. Shanghai was an impressive city then and it is even more impressive today. I visited the Shanghai Tower and I wrote in the guestbook: Thank you for giving us a bird’s-eye-view of the future. This city represents the future of China and the entire world and I believe that Israel can be part of this future. But we do not forget the past. Jews who fled the Nazi horrors during the Holocaust found refuge in Shanghai and we will never forget it.”

Hundreds of members of the Mirrer Yeshivah found refuge in Shanghai during the Holocaust.

Another shadow from the Mideast was the simultaneous though separate visit by Palestinian Authority President Mahmoud Abbas, who was greeted by his Chinese counterpart Xi Jinping in Beijing on Monday.

China, a permanent member of the U.N. Security Council, has traditionally had a low profile in Mideast diplomacy, but is keen to gain a role as an important participant in international politics.