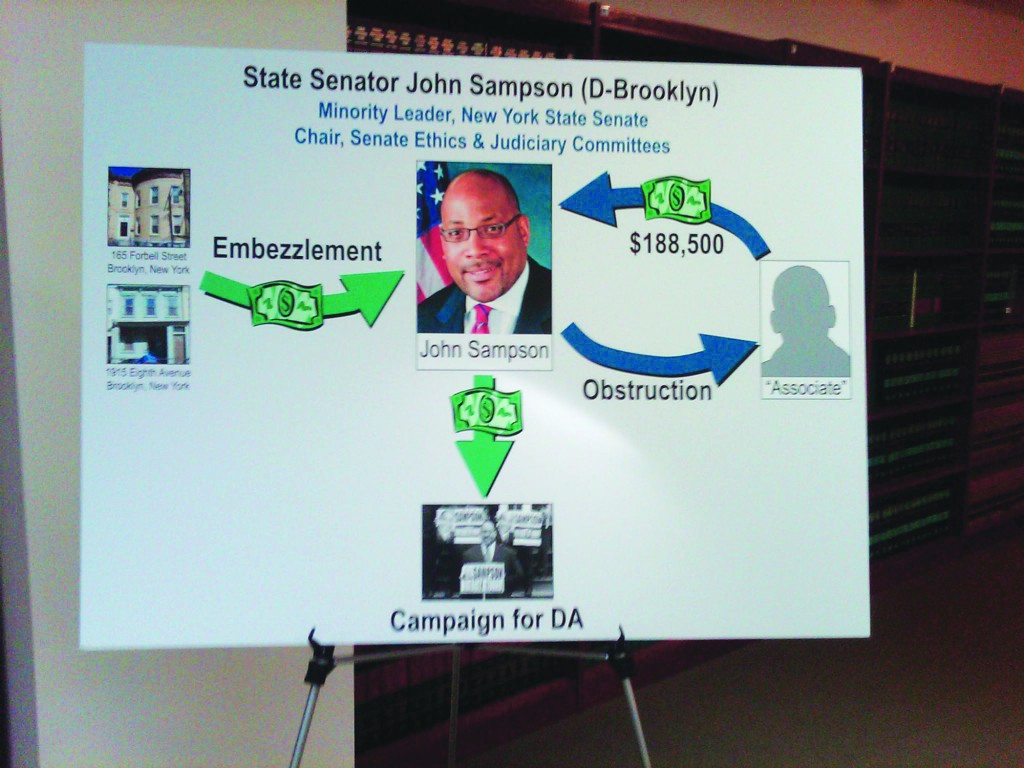 A prominent New York state senator pleaded not guilty on Monday to embezzlement and other charges alleging he brazenly tried to sabotage a federal fraud investigation of his law practice by seeking inside information from an employee of the Brooklyn U.S. attorney’s office.

Sen. John Sampson told the employee — who has since been fired — that he wanted to identify cooperators in his case so he could arrange to “take them out,” prosecutors said in announcing an indictment against the former Democratic leader in the Senate.

The indictment alleges that Sampson embezzled $440,000 from escrow accounts under his supervision as a court-appointed referee for foreclosures. It says some of the funds were funneled into his losing campaign to become Brooklyn district attorney in 2005.

When an interview with the FBI last year concluded with agents accusing the senator of lying, Sampson responded, “Not everything I told you was false,” prosecutors said.

The allegations “show the extreme arrogance and hubris involved in this case,” U.S. Attorney Loretta Lynch said at a news conference.

FBI Assistant Director-in-Charge George Venizelos said that the most disappointing thing of the recent rash of arrests is that New Yorkers are becoming cynical of the political profession.

“Today we add one more name to the ever-lengthening list of corrupt New York officials,” Venizelos said. “At a bare minimum the people have a right to expect and demand that their elected representatives at least obey the law…. It’s clear that too many of them are self-serving and not serving the public.”

Sampson’s arrest brings to 32 the number of New York officials snared for corruption in the past seven years. And Lynch hinted that prosecutors are not over with the arrests yet.

“I can say the investigation is continuing,” Lynch said.

Sampson, 47, was released Monday on $250,000 bond after prosecutors told a judge they already offered him a plea deal that could put him behind bars for a maximum of about four years if he pleads guilty to the top embezzlement count and a lesser charge in a nine-count indictment.

Andrea Stewart-Cousins, the senator who replaced Sampson as the head of the Democratic conference, swiftly stripped him of all his former ranks and privileges. Sampson was Democratic majority leader for part of a term that was marked by political gridlock. He rose to the position after Sen. Malcolm Smith, in his partial term as majority leader, lost power during a time of a Republican-led coup.

In 2012, Sampson stripped Sen. Shirley Huntley of leadership positions when her indictment was announced. He did the same with then-Sen. Carl Kruger when Kruger was arrested in 2011 in a separate bribery probe. Kruger pleaded guilty to conspiracy charges and was sentenced to seven years in prison.

Despite the allegation involving funding for the DA’s race — and another accusing Sampson of filing false Senate disclosure forms to conceal a $188,500 loan from a real estate developer — Sampson’s lawyer, Zachary Carter, insisted his case wasn’t in the same category as a recent rash of other criminal cases accusing New York lawmakers of abusing their authority for personal gain or to cheat on campaign finance rules.

Carter, a former U.S. attorney in Brooklyn, told reporters outside the court that the case involved “ordinary charges” related to his private life as a lawyer, not “official corruption.”

However, Gov. Andrew Cuomo immediately pointed to Sampson’s arrest as reason to revive his anti-corruption proposals, which include public financing of campaigns.

“There will always be bad actors,” Cuomo said, “but it is incumbent on us to reform the system.”

As part of a roster of reforms, Cuomo is seeking to strip political party leaders of their ability to allow someone from outside the party to run on their lines.

“Everyone knows for a very long time, minor party lines have been for sale,” Cuomo said. “Well that’s a harsh statement, I know,  but it’s a reality.”

Venizelos said in statement: “We share what may well be the concern of many New Yorkers that ‘incumbent’ and ‘defendant’ cannot be accepted as interchangeable.”

Ravi Batra, the former commissioner of JCOPE, the state ethics committee who was appointed by Sampson, said he was “stunned by the length and breadth of the charges” filed against the senator.