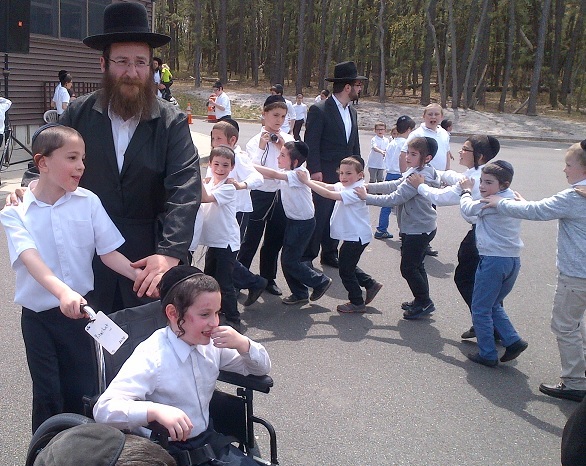 Six weeks after being struck and critically injured by a vehicle, a 7-year-old boy from Lakewood has returned home.

Yitzchok Weisz came home Friday following his seven-week ordeal, for which doctors have revised their diagnosis from a two-year recovery to as little as three months.

“Baruch Hashem, he’s doing great,” Asher Weisz, Yitzchok’s father, told Hamodia. “The reason I don’t mind you calling is because I think that it’s an inspiration that tefillos really help.”

Weisz’s return home, which was first reported by TheLakewoodScoop.com, comes seven weeks after he was struck by a car at the intersection of Kelm Woods and Hillside Boulevard on March 16, and was thrown over 20 feet.

When Hatzolah arrived, Yitzchak was unconscious and bleeding heavily from his head. He was transported to Jersey Shore Medical Center, where he remained in an induced coma. Asher Weisz, an accountant, said that he started a vigil, not leaving his bedside as his wife took care of his seven other children.

But, he said that the tefillos clearly helped so much that doctors were amazed to see a major turn for the better. While the original verdict was that he would not make a full recovery for a year — the rehab center added another year — doctors now say they expect a full recovery within three months.

“With the help of all your Tehillim and tefillos, his recovery has been faster than what the doctors had predicted,” Yitzchak’s father said. “He is, bli ayin hara, doing amazing — breathing, walking, talking, eating, etc. Although he’s still receiving some therapy, we are hopeful for a full recovery.”

Just before Pesach, Yitzchak left the hospital and was placed in a rehabilitation center. He was brought to his yeshivah, Toras Emes, in his wheelchair on Lag BaOmer to participate in the school’s bonfire. With his classmates following behind, Yitzchak was wheeled around the bonfire.

He was finally allowed to come home this past Friday. Asher said that he was thinking of sending his son to yeshivah on Tuesday for an hour.