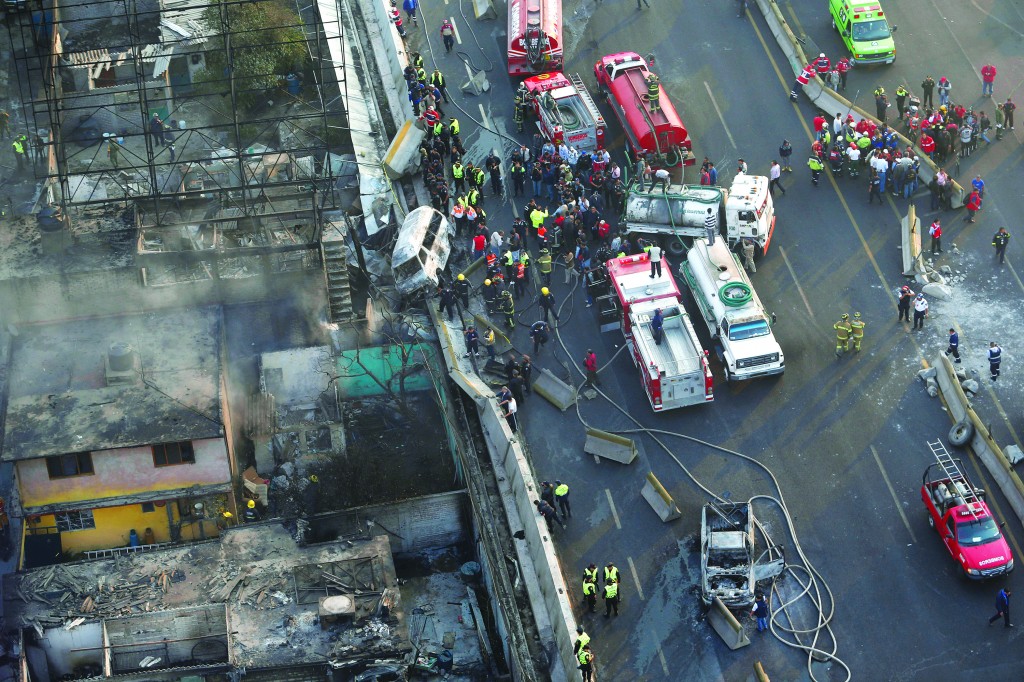 A natural gas tanker truck lost control, hit a center divider and exploded on a highway lined by homes in the Mexico City suburb of Ecatepec early Tuesday, killing at least 20 people and injuring nearly three dozen, according to the Citizen Safety Department of Mexico State, which surrounds Mexico City.

Officials did not rule out the possibility the death toll could rise more as emergency workers continued sifting through the charred remains of vehicles and homes built near the highway on the northern edge of the metropolis.

Residents pitched in to rescue people from the wreckage of the 5:30 a.m. explosion, crushed and burned cars and shattered homes. Media footage showed plumes of flame shooting out of homes in the pre-dawn darkness.

A huge piece of the truck’s gas tank was blown 50 yards by the force of the blast, landing atop the wall of a house and cars parked outside. A number of pigs and other farm animals that were kept on patios were killed.

“It was thunderous sound. I thought we were all going to die,” said Rita Enriquez, 42, a housewife who lives near where the blast occurred. “When we ran out, we saw a car on fire and flames everywhere. Smoke was pouring all over the freeway.”

Enriquez said five of her relatives were gravely injured in their concrete slab home along the freeway, though she had no other details as she waited for word outside Magdalena Las Salinas Hospital in Mexico City.

The pre-dawn accident exposed two recurrent public safety issues in Mexico: extremely heavy trucks that are frequently involved in serious accidents, and the construction of improvised homes just feet away from major highways.

Some of the cinderblock homes hit by the massive explosion were just steps away from the busy, eight-lane highway. Other homes were mere shacks, built of sheet tin.

The truck involved in Tuesday’s accident was a double tanker: one cab pulling two gas tanks. The driver was injured in the crash, and was under detention at a local hospital.

One year ago, the Mexican government announced measures to tighten inspections and lower maximum allowed weights for freight trucks after protests over a string of deadly accidents involving double-trailer trucks.

Mexico had allowed trucks to travel two-lane roads with loads of up to 80 metric tons and lengths exceeding 100 feet, compared to a U.S. limit of is 80,000 pounds (40 tons) on interstate highways. It subsequently reduced that limit by about 4.5 tons.

In April 2012, a double-trailer truck on a two-lane road in the Gulf coast state of Veracruz lost its rear trailer, which slammed into a bus carrying farm workers, killing 43 people.