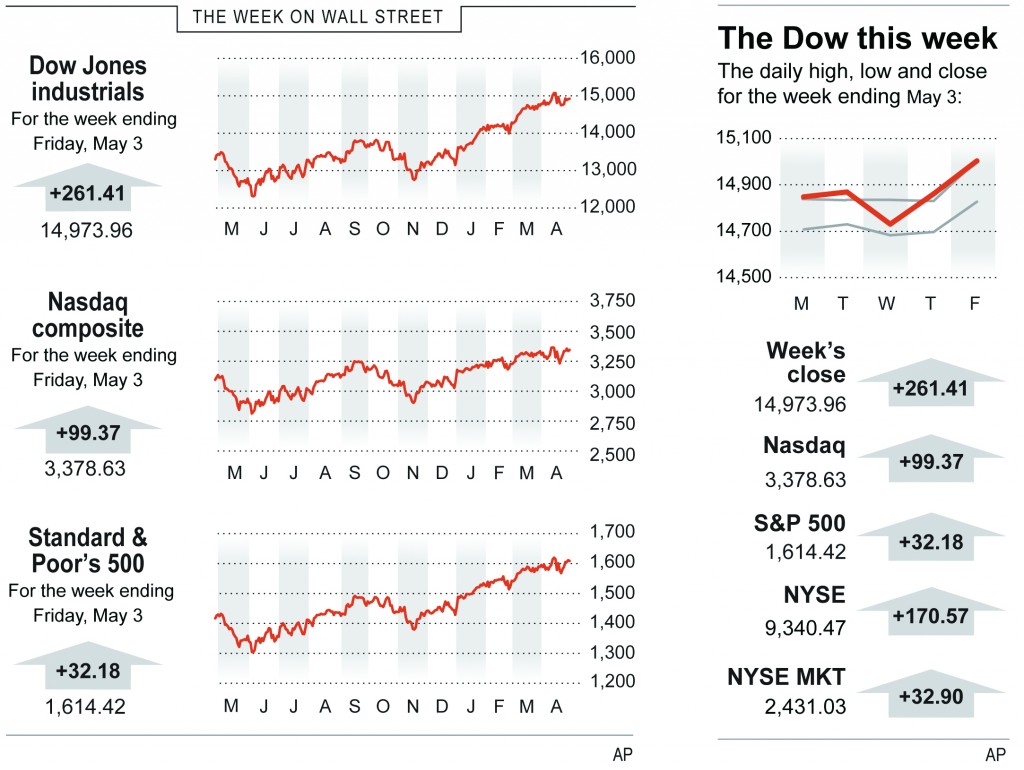 After weeks of mixed signals about manufacturing and earnings, a surprisingly strong U.S. jobs report gave investors confidence that the economy isn’t about to falter.

The market jumped from the opening bell. Traders donned party hats, and a wave of buying helped the Standard and Poor’s 500 index crack the 1,600 mark for the first time. The Dow Jones industrial average broke through 15,000.

“There’s euphoria today,” said Stephen Carl, the head equity trader at The Williams Capital Group. “That’s what you’d have to call it.”

On the floor of the New York Stock Exchange, brokers sported baseball caps emblazoned with “Dow 15,000.”

Jobs are crucial to keeping the stock market climbing. Big U.S. companies are making record profits, but much of that has come from cutting costs, not boosting sales. More jobs and more consumer spending would help.

U.S. employers added 165,000 workers last month and many more in February and March than previously estimated. The unemployment rate fell to the lowest level in four years, 7.5 percent.

In its report, the government revised its previous estimate of job gains up to 332,000 in February and 138,000 in March. The economy has created an average of 208,000 jobs a month from November through April — above the 138,000 added in the previous six months.

On Friday, the market’s gains were broad. Eight of the 10 industry groups in the S&P 500 index rose. Nearly three stocks rose for every one that fell on the NYSE.

Companies that stand to benefit most from an upturn in the economy led the market. Those that make basic materials and produce oil and gas rose the most in the S&P 500 index.

The yield on the benchmark 10-year Treasury note jumped from its lowest level of the year as traders moved money out of the safety of government bonds. The yield rose to 1.74 percent from 1.63 percent late Thursday.

Small-company stocks are more risky than bigger companies but can also offer investors greater returns. On Friday, they outpaced the broader market. The Russell 2000 jumped 14.57 points, or 1.6 percent, to 954.42, a new all-time high.

Some investors were skeptical.

Among other stocks making big moves on Friday: