Alone in the single-seat cockpit and high above the American Southwest, pilot Bertrand Piccard could hear only his plane’s gear box and the quiet whine of four electric motors. No noisy jet engines.

Piccard piloted the craft for 20 hours, first cruising along the California coast after taking off from Moffett Field in Mountain View near San Francisco just after dawn Friday. He passed over Edwards Air Force Base, where other aviation milestones have been made, and then touched down early Saturday morning at Phoenix Sky Harbor Airport.

He landed having used only three-quarters of the plane’s battery power.

“It’s a little bit like being in a dream,” Piccard said as he stepped on the tarmac.

The plane’s creators, Piccard and fellow pilot Andre Borschberg, said the trip is the first attempt by a solar airplane capable of flying day and night without fuel to fly across America.

From Phoenix, the aircraft will travel to Dallas-Fort Worth airport in Texas, Lambert-St. Louis airport, Dulles airport in the Washington area and New York’s John F. Kennedy airport. Each flight leg will take about 19 to 25 hours, with 10-day stops in each city.

Borschberg is hoping to pilot the last leg, which could afford him the chance to fly past the Statue of Liberty.

The plane, which has previously impressed audiences in Europe, is powered by about 12,000 photovoltaic cells that cover massive wings and charge its batteries.

The delicate, single-seat Solar Impulse flies around 40 mph and can’t go through clouds. It weighs about as much as a car, making it vulnerable to bad weather.

Its average speed for the first leg of the trip was about 60 knots with a tail wind, Borschberg said. Ideally, the plane climbs up to about 27,000 feet or so during the day to collect solar and charge the batteries.

Borschberg and Piccard were ready for a series of tours over the next few days to show off the technology to Phoenix school children, university researchers and others. “There are a lot of people who want to see this airplane,” Piccard said.

So how hard is it to fly a solar plane?

Despite the aviation advancements made over the last century, Piccard said he and Borschberg have a lot in common with the early pioneers.

“We’re starting a new cycle. It’s really the beginning of something new.” 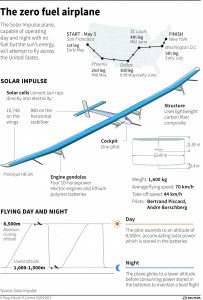 This article appeared in print on page 2 of the May 7th, 2013 edition of Hamodia.