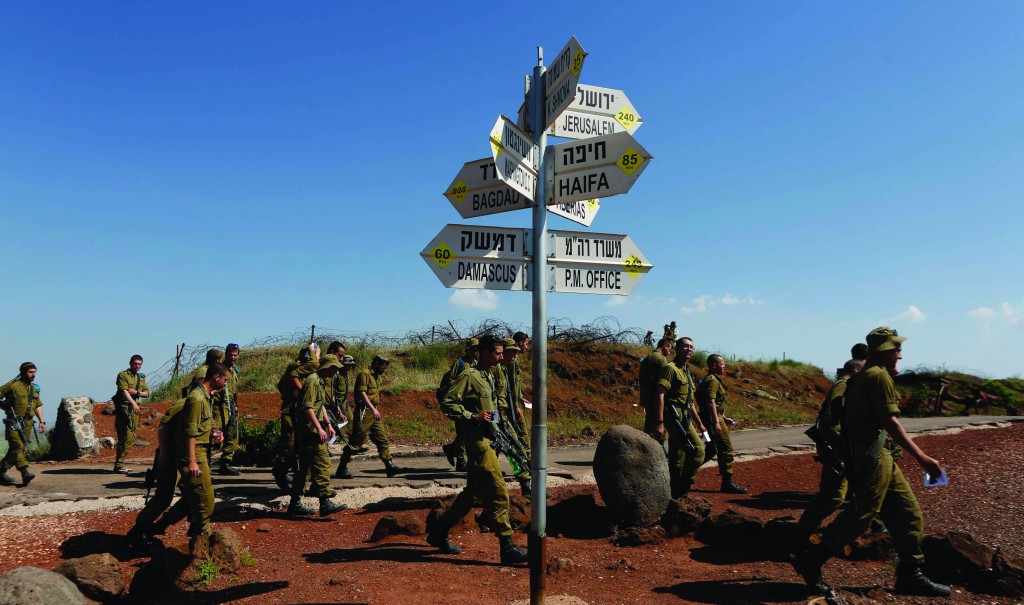 All eyes were on the northern border on Sunday, as Syria, in the wake of a spectacular air strike near Damascus early Sunday morning on multiple sites containing Hizbullah-bound missiles, threatened retaliation and reportedly aiming missile batteries at Israel.

Syria’s Deputy Foreign Minister Faisal al Mekdad told CNN that the alleged Israeli operation — which Israel would not confirm — was regarded as an Israeli “declaration of war” on the Assad regime, and that his country would respond in a manner and time of its own choosing.

As of Sunday afternoon, Israel took the precaution of closing its airspace in the north to civilian carriers, and Arkia flights from Haifa to Eilat were cancelled.

That closure followed the deployment earlier in the day of Iron Dome missile defense batteries in Haifa and Tzfas.

Iran, a close ally of the Assad regime, condemned the airstrikes, and a senior official hinted at a possible response not from Tehran, but rather from Hizbullah.

Gen. Masoud Jazayeri, assistant to the Iranian chief of staff, told Iran’s state-run Arabic-language Al-Alam station that Tehran “will not allow the enemy [Israel] to harm the security of the region.” Both Syria and Iran blamed it on collusion between Israel and Syria’s rebels. 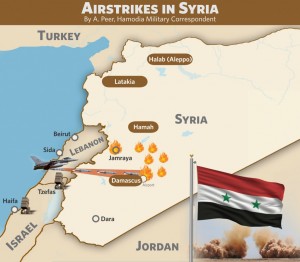 A senior Israeli official, who spoke on condition of anonymity, told the The Associated Press that Israel did in fact launch the airstrike, targeting a Hizbullah-bound supply of Fateh-110 missiles, which have precision guidance systems more lethal than anything Hizbullah now possesses.

Uzi Rubin, a missile expert and former Defense Ministry official, told the AP that if the target were Fateh-110 missiles as reported, then it is a game- changer as they put almost all Israel in range.

“If fired from southern Lebanon, they can reach Tel Aviv and even Be’er Sheva.” He said the rockets are five times more accurate than the Scud missiles that Hizbullah has fired in the past. “It is a game-changer because they are a threat to Israel’s infrastructure and military installations,” he said.

The explosions at the Jamraya military and scientific research center near Damascus were reported to have occurred beginning around 3 a.m., lighting up the night sky with pillars of flame and shaking the entire Syrian capital.

The White House declined for a second day to comment directly on Israel’s air strikes in Syria, but said Obama believes Israel, as a sovereign nation, has the right to defend itself against threats from Hizbullah.

“The Israelis are justifiably concerned about the threat posed by Hizbullah obtaining advanced weapons systems, including some long-range missiles,” said White House spokesman Josh Earnest. He said the U.S. was in “close coordination” with Israel but would not elaborate.

British Foreign Secretary William Hague also seemed to back Israel, telling Sky News, “All countries have to look after their own national security.”

People living near the Jamraya base spoke of explosions over several hours in various places near Damascus, including a town housing senior officials. “Night turned into day,” one man told Reuters from his home near Jamraya.

Syrian state media claimed the bombing caused “many civilian casualties and widespread damage” and quoted a letter of complaint from the foreign minister to the United Nations saying, “The blatant Israeli aggression has the aim to provide direct military support to the terrorist groups after they failed to control territory.”

Israeli Prime Minister Binyamin Netanyahu reportedly held an emergency meeting of his inner security cabinet Sunday. However, the prime minister’s office declined comment on the airstrike, and Netanyahu left later in the day for a planned visit to China.

Amos Yadlin, a former head of Israel’s military intelligence, said the strikes on Syria are a signal to Damascus’s ally, Tehran, that Israel is serious about the red lines it has set.

“Syria is a very important part in the front that Iran has built. Iran is testing Israel and U.S. determination,” he told Army Radio, adding that the purpose was to clarify to Iran “that at least some of the players, when they define red lines and they are crossed, take it seriously.”

The Fateh-110, Farsi for “conqueror,” is a short-range ballistic missile developed by Iran and first put into service in 2002. The Islamic Republic unveiled an upgraded version in 2012 that improved the weapon’s accuracy and increased its range to 185 miles.