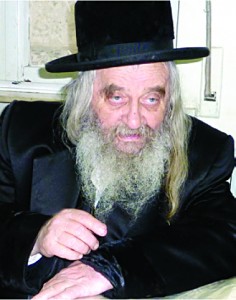 A large crowd escorted Harav Menachem Monderer, zt”l, the Kossover Rebbe of Yerushalayim, on his final journey on Motzoei Shabbos after he passed away at the age of 79. Harav Monderer was renowned for his avodas Hashem, brilliance in Torah and especially his chessed. He was descended from the illustrious tzaddikim of Kossov, Shpitevka and the Baal Shem Tov, zy”a.

Reb Menachem was born before the Holocaust to his father, Harav Moshe Monderer, zt”l, who was very close to the Ahavas Yisrael of Vizhnitz, the Kedushas Tzion of Bobov and Harav Yoel of Satmar, zecher tzaddikim livrachah. His mother was the daughter of the Rav of Baramte, Harav Menachem Mendel Dachner, zt”l.

Reb Menachem once complained to his father that before Rosh Hashanah he was not feeling well, and his entire body was trembling for fear of the Yom Hadin. His father replied, “In our family it was known that on Yom Kippur we could not daven; instead we spent the day in bed out of fear…”

During the war, the family fled from the oppressors, but en route his mother collapsed and passed away. She was buried in Romania. Three weeks ago, on Rosh Chodesh Iyar, his mother’s yahrtzeit, Reb Menachem related the miracle of how he, his father, and his only sister, Rebbetzin Zeinwirth, shetichyeh, escaped.

They were fleeing from a town where a plague had broken out. He and his sister held their father’s hands. Suddenly, his father was horrified to see a sefer Torah on the floor. He reverently picked it up and kissed it, and from then on he carried the sefer Torah in one hand and clutched the two children’s hands in the other.

Reb Menachem came to Eretz Yisrael with the Yaldei Teheran. He was one of the children who was accepted due to the spiritual hatzalah work of Agudas Yisrael, and he was spared being forced to give up his religion by the Jewish Agency, which robbed most of the orphans of their Yiddishkeit.

As a bachur he learned in Yeshivas Satmar, and later under the Imrei Chaim of Vizhnitz, zy”a. The Imrei Chaim noticed his talents, and Reb Menachem became one of his closest talmidim. When he was still a bachur, he was appointed as a mashgiach in his yeshivah. For years he learned with the Yeshuos Moshe, zy”a.

Reb Menachem married the daughter of Harav Elazar Brizel, zt”l, a prominent Karliner chassid in Yerushalayim. His Rebbetzin was niftar ten years ago, and he remarried his current Rebbetzin, who was very devoted to him.

Reb Menachem became close to Harav Yiddele Horowitz of Dzikov, zy”a, to whom he remained devoted for 40 years, until the Rebbe’s passing in 5749.

His day began at three in the morning, and he davened vasikin in the Sephardic shul near his home. From there he went to the Oshpitzin shul, where dozens of Chassidic boys who learned in the Mir congregated, and he davened Shacharis again, with the Vizhnitzer nusach. He would not repeat the Name of Hashem in the brachos, but not a single bachur was aware that he had already davened vasikin. When people asked him how he did it, he would say, “Some people like to eat breakfast after davening. I like to daven again…”

Right after davening he sat down to learn a passage in sefer Toldos Yaakov Yosef, saying he could not start the day without it. He would then deliver words of chizuk for up to half an hour.

Each day he had a regular place to daven: one day at the Kosel, another at Kever Shmuel Hanavi another at Kever Rochel. Then he delivered a shiur in the Pupa beis medrash. Thirty years ago, Harav Moshe Aryeh Freund, the Gaavad of the Eidah Hachareidis, appointed him to give a shiur in Yeshivas Satmar.

After the liberation of the Kosel he established the Friday-night minyan there with the Vizhnitzer nusach. It was attended by hundreds of people. On Shabbos morning and on Yamim Tovim, he davened in Harav Freund’s beis medrash. On Friday night he attended the tischen of the Toldos Avraham Yitzchak Rebbe, shlita. For shalosh seudos people came to his home, and he learned the sefarim of the Baal Shem Tov’s talmidim.

His hachnasas orchim was legendary. His home was open to anyone, and for more than 50 years close to 100 people ate at his table each Shabbos. People came from all streams, including the brokenhearted and downtrodden. On Shabbos morning, homeless people would come to his house and fill their pots with cholent prepared for the seudah. Reb Menachem would stand patiently and serve them.

He fell ill about a year ago and deteriorated steadily. However, he continued giving his shiurim, and until Purim still went to the yeshivah, kollel and beis medrash. On the Seder night, he was hospitalized and conducted his Seder in the hospital. The medical staff said they had never heard such a thunderous Hallel.

Despite his suffering, his mind was lucid. He refused to take painkillers if they reduced his alertness.

On Thursday, the Toldos Avraham Yitzchak Rebbe visited him. That evening his suffering worsened, but he still refused medication. After the Rebbe came came, they began to sing Shabbos zemiros. It was a surreal sight.

On Friday night he still was able to daven, but on Shabbos morning he was taken to the hospital, where he passed away.

The levayah took place on Motzoei Shabbos and he was buried on Har Hazeisim. Harav Monderer is survived by his second wife, a sister, seven sons and six daughters.

This article appeared in print on page 1 of the May 6th, 2013 edition of Hamodia.