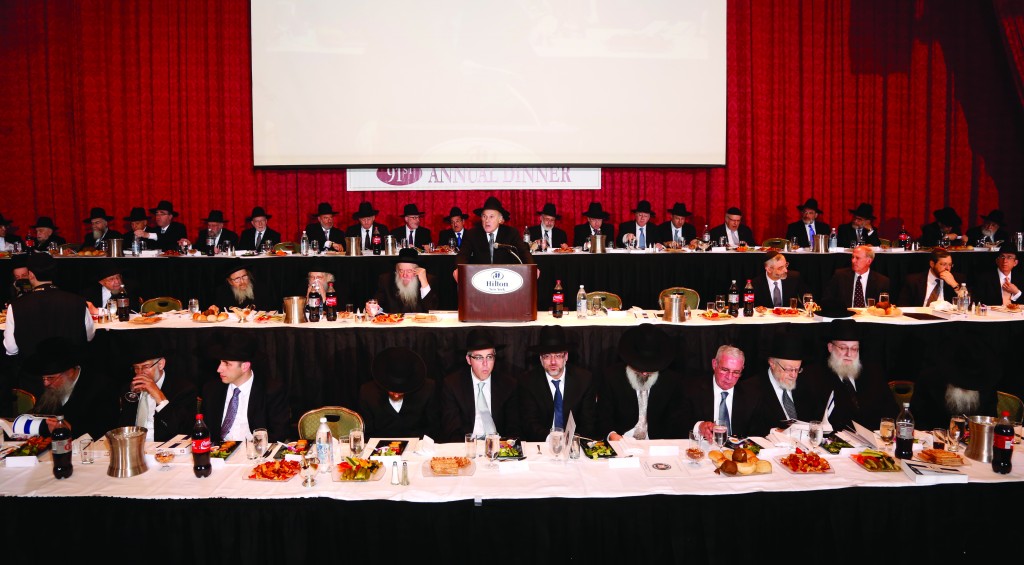 Hundreds of people on Sunday gathered at the New York Hilton for the 91st annual dinner of Agudath Israel of America.

The evening commenced with the crowd being led in the reciting of Tehillim by the Vyelipoler Rebbe, shlita, after which the chairman, Dr. David Diamond, welcomed the long list of Rabbanim, Roshei Yeshivah, elected officials and judges, as well as his colleagues in the leadership of Agudath Israel.

Rabbi Cohen introduced the guest speaker of the evening, Sen. Dan Coats, Republican of Indiana. Sen. Coats spoke of his strong relationship with the Agudah leaders, and their collaboration on legislation important to our community. He alluded to his shared value with this community, saying, “As a conservative, my values are yours.”

The Novominsker Rebbe, shlita, Rosh Agudas Yisrael, then addressed the gathering, saying, “The mission of the Agudah is to continue the mission of Avraham Avinu,  vayikra b’Shem Hashem … [and] to continue to ensure that our children follow in this way… .”

“Our mission and our focus is l’harbos kvod Shamayim,” the Rebbe declared.

“Tonight represents the Agudah’s recognition and appreciation for these diverse individuals, from diverse backgrounds, who perform a diverse array of chessed,” Rabbi Abba Cohen, told Hamodia before the program began.

Rabbi Meir Kagan was one of the avodas hakodesh awardees recognized at the dinner. Asked what he does, he replies unassumingly, “I sell watches.” But selling watches is not what takes up the majority of his time. Rabbi Kagan, on a volunteer basis, has involved himself with multiple institutions, dealing with concerns from bikur cholim to Torah education, as well as with Torah institutions overseas.

Rabbi Kagan, a Gerrer chassid, said he is shy by nature but, “I have agreed to accept this honor despite my hesitance to do so because there is so much need in the community, and so many people in need of help. And if I can inspire even one person to get involved with community work, and help his neighbor, then this honor will have been worth it.”

Additional honorees were Rabbi Binyamin Babad, part of the Agudah leadership for over a decade, who now heads Relief, an organization providing mental-health referrals.

Rabbi Shalom Rosenfeld, director of Yeshivas Oholei Torah Lubavitch in Crown Heights, who was present at the dinner, said that the relevance and the importance of the Agudah are as strong as ever before.

“They are an invaluable resource to us on our daily running of the yeshivah, as they are to so many institutions across the United States. If we can band together with achdus, we can reach great heights.”

Mr. Shlome Werdiger, the recently appointed chairman of the board of Agudah’s board of trustees, told Hamodia, “To contemplate how far we have come as Orthodox Jewry on these shores, and now to see ominous clouds of threats to our ability to serve Hashem, only one conclusion can be reached: We must band together as one, no matter who we are and what background we come from, and take care of one another.”