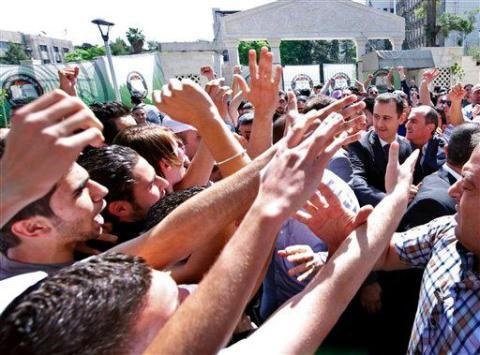 Israeli missiles struck a Syrian military research center near the capital Damascus early Sunday, according to Syrian media, a day after it confirmed that it took out a convoy in Syria which was carrying “game-changing” missiles from Iran to Hezbollah.

Israeli officials have not confirmed the second attack.

Israel has said it will not allow sophisticated weapons to flow to Hezbollah, an ally of Syrian President Bashar Assad and a terror organization committed to the destruction of the Jewish state. Iran’s shipment comes as the escalating fighting in Syria approaches a point where Assad may have to flee, depriving Tehran a key ally in the region.

SANA, the semi-official Syrian media, said explosions went off at the Jamraya research center near Damascus Sunday, causing casualties. “Initial reports point to these explosions being a result of Israeli missiles that targeted the research center in Jamraya,” SANA said.

A Syrian activist group, the Britain-based Syrian Observatory for Human Rights, also reported large explosions in the area of Jamraya, a research facility northwest of Damascus, about 10 miles from the Lebanese border.

On Saturday, Israeli officials confirmed that a day earlier, Israeli aircraft targeted a weapons shipment in Syria that was apparently bound for Hezbollah. U.S. officials said they believed the strike hit a warehouse.

The New York Times quoted an American official that the targeted shipment consisted of Iranian-made Fateh-110’s — a mobile, accurate, solid-fueled missile that has the range to strike Tel Aviv and much of Israel from southern Lebanon, and that represents a considerable improvement over the liquid-fueled Scud missile. Two prominent Israeli defense analysts said the shipment included Scud D’s, a missile that Syrians have developed from Russian weapons with a range of up to 422 miles — long enough to reach Eilat, in southernmost Israel, from Lebanon.

President Barack Obama said Saturday, before the latest incident, that it was up to Israel to confirm or deny any strikes, but that the U.S. coordinates very closely with Israel.

“The Israelis, justifiably, have to guard against the transfer of advanced weaponry to terrorist organizations like Hezbollah,” Obama told the Spanish-language media station Telemundo.