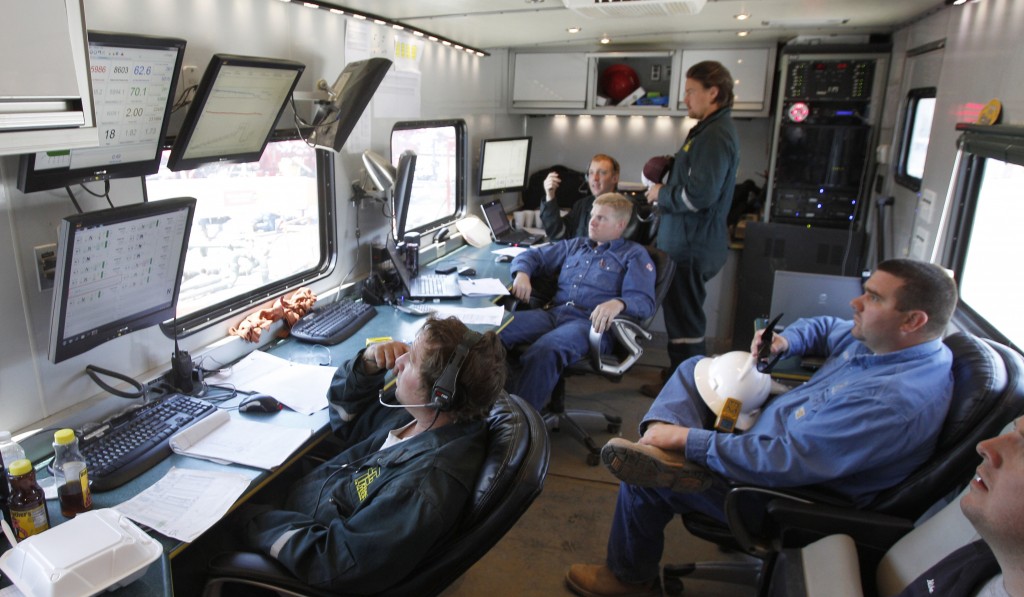 Technology created an energy revolution over the past decade — just not the one we expected.

By now, cars were supposed to be running on fuel made from plant waste or algae — or powered by hydrogen or cheap batteries that burned nothing at all. Electricity would be generated with solar panels and wind turbines. When the sun didn’t shine or the wind didn’t blow, power would flow out of batteries the size of tractor-trailers.

Fossil fuels? They were going to be expensive and scarce, relics of an earlier, dirtier age.

But in the race to conquer energy technology, Old Energy is winning.

Oil companies big and small have used technology to find a bounty of oil and natural gas so large that worries about running out have melted away. New imaging technologies let drillers find oil and gas trapped miles underground and undersea. Oil rigs “walk” from one drill site to the next. And engineers in Houston use remote-controlled equipment to drill for gas in Pennsylvania.

The result is an abundance that has put the United States on track to becoming the world’s largest producer of oil and gas in a few years. As domestic production has soared, oil imports have fallen to a 17-year low, the U.S. government reported Thursday.

And the gushers aren’t limited to Texas, North Dakota and the deep waters of the Gulf of Mexico. Overseas, enormous reserves have been found in East and West Africa, Australia, South America and the Mediterranean.

“Suddenly, out of nowhere, the world seems to be awash in hydrocarbons,” says Michael Greenstone, an environmental economics professor at the Massachusetts Institute of Technology.

The consequences are enormous. A looming energy crisis has turned into a boom. These additional fossil fuels may pose a more acute threat to the earth’s climate. And for renewable energy sources, the sunny forecast of last decade has turned overcast.

Technological advances drove a revolution no one in the energy industry expected: one that is just beginning.

The new century brought deep concerns the world’s oil reserves were increasingly concentrated in the Middle East — and beginning to run out. Energy prices rose to record highs. Some climate scientists warned that reliance on fossil fuels was causing troubling changes to the environment.

“The general belief was that the end of the oil era was at hand,” says Daniel Yergin, an energy historian and author of “The Quest: Energy, Security and the Remaking of the Modern World.”

As a result, Wall Street, Silicon Valley and governments were pouring money into new companies developing alternative forms of energy that promised to supply the world’s needs without polluting.

But while the national focus was on alternatives, the oil and gas industry was innovating too. New technology allowed drillers to do two crucial things: Find more places where oil and gas is hidden, and bring it to the surface economically.

Large oil companies such as Exxon, Chevron, Shell and BP turned up huge discoveries offshore in ultra-deep water, with the help of faster computers and better sensors that allowed them to see once-hidden oil deposits.

For most of the oil age, drillers have looked for large underground pools of oil and gas that were easy to tap. These pools had grown over many years, as oil and gas oozed out of what is known as “source rock.” Source rock is a wide, thin layer of sedimentary rock — like frosting in the middle of a layer cake — that is interspersed with oil and gas.

An engineer named George Mitchell and his company, Mitchell Energy, spent years searching for a way to free natural gas from this source rock. He finally succeeded when he figured out how to drill horizontally, into and then along a layer of source rock. That allowed him to access the gas throughout a layer of source rock with a single well. Then he used a process known as hydraulic fracturing, or “fracking,” to create tiny cracks in the rock that would allow natural gas to flow into and up the well.

The United States, which was facing a gas shortage five years ago, now has such enormous supplies that it is looking to export the fuel in large volumes for the first time.

The common wisdom in the industry was that the process Mitchell had invented for natural gas wouldn’t work for oil. Oil molecules are bigger and stickier than gas molecules, so petroleum engineers believed it would be impossible to get them to flow from source rock, even if the rock were cracked by fracking. But Mark Papa, the CEO of a small oil and gas company called EOG Resources, didn’t accept that.

“The numbers were too intriguing; the prize was so big,” he remembered.

He thought there could be as much as a billion barrels of oil within reach in Texas, North Dakota and elsewhere — if only he could squeeze it out.

In 2003, he had a “eureka!” moment while poring over pictures of rock. Sections of a 40-foot-long column of source rock had been run through a CT scanner, the same type used to peer into the human body.

He saw something in the source rock sections that the rest of the industry didn’t know was there: A network of passageways big enough for oil molecules to pass through. Papa believed the passageways could act like rural roads for the oil to travel through. Fracking could then create superhighways for the oil to gather and feed into a pipe and up to the surface.

EOG began drilling test wells, and in 2005, Papa got some results from one in North Dakota that made him realize oil could flow fast enough to pay off.

“My first thought was we need to replicate this, make sure it’s not a freak result,” he says.

Papa thought the Eagle Ford might hold 500,000 barrels of oil. The Department of Energy now predicts it holds 3.4 billion. Some even expect 10 billion, which would make it the biggest oil field in U.S. history.

But even after drillers figured out how to find oil and gas deep offshore and in onshore source rock, they still needed to develop technology that would make it economical.

At the tip of every oil or gas drill is a rotating mouth of sharp teeth that chews through rock. In the past, these drill bits could only dig straight down. Now they are agile enough to find and follow narrow horizontal seams of rock.

And behind the drill bit, attached to a long line of steel known as the “drill string,” is an array of sensors that collect data about the rock and underground fluids. The data, which is sent to engineers via fiber-optic cables, is run through supercomputers – as powerful as 30,000 laptops – to create a picture of the earth thousands of feet below the surface.

“To the layman, it looks like dumb iron, but you’d be shocked about what’s inside,” says Art Soucy, president of global products and services at Baker Hughes.

When the drilling is done, the rig itself can “walk” a hundred feet or so to another location and start drilling again. In the past, rigs had to be taken down and reassembled, which could take days.

“It has made possible things that were unthinkable 10 years ago,” says Claudi Santiago, managing director at First Reserve Corp., a private-equity firm that invests in energy companies.

Renewable technologies have had their successes. Solar now generates six times more electricity in the U.S. than it did a decade ago, and wind produces 18 times more. Most major automakers offer some type of electric vehicle.

But the outlook for wind, batteries and biofuels is as dim as it’s been in a decade. Global greenhouse gas agreements have fizzled. Dazzling discoveries have been made in laboratories, and some of these may yet develop into transformative products, but alternative energy technologies haven’t become cheaper or more useful than fossil fuels.

It’s certainly possible that the world will change direction again in the next five years. After all, experts didn’t see the oil and gas boom coming five years ago.

There are hundreds of companies, including fossil fuel giants, working on renewable-energy projects. And despite growing supplies of oil, prices remain high because developing nations are consuming more.

But EOG’s Papa says oil and gas companies will just invest in even more sophisticated technology. He estimates that current techniques pull only 6 percent of the oil trapped in source rock to the surface. Learning to double that would yield yet another enormous trove of hydrocarbons.

“Now we go into the next phase of technology,” he says. “How are we going to get the rest of it out of the ground?”