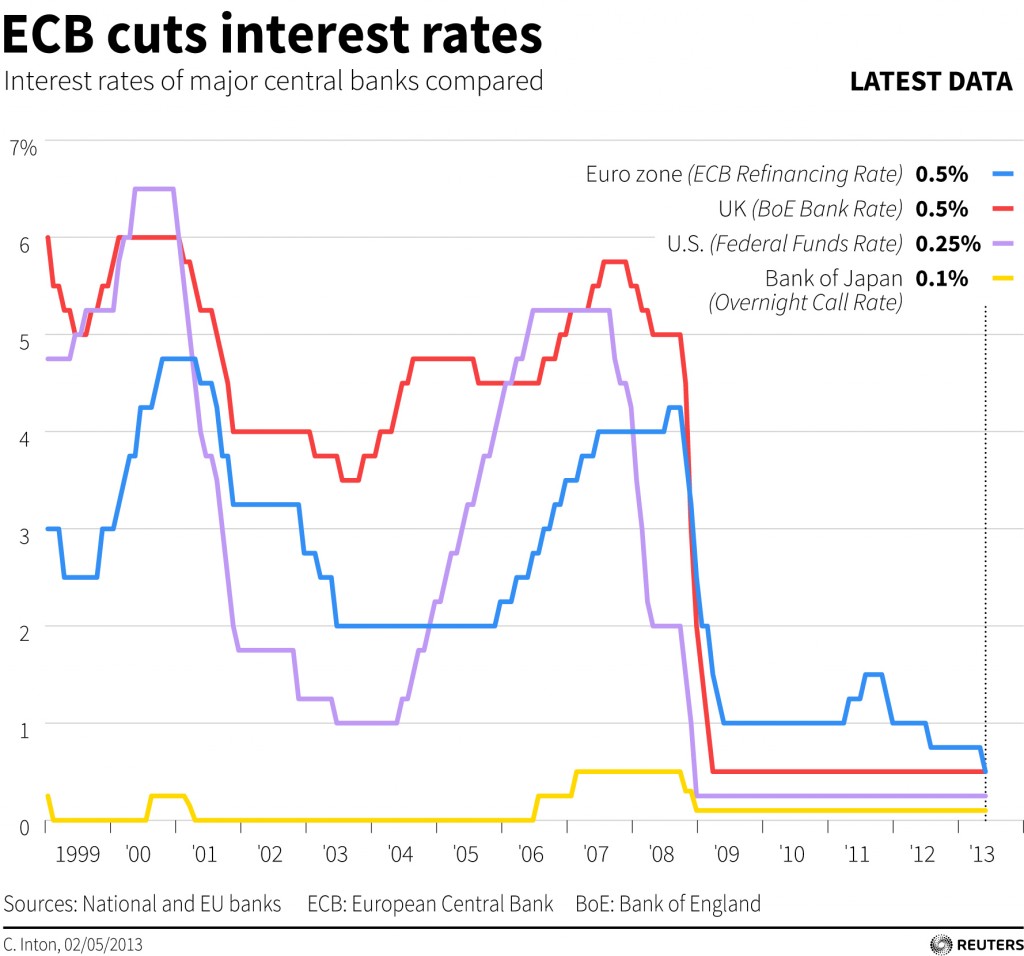 The European Central Bank cut its key interest rate to a record-low 0.50 percent Thursday, and announced other measures to spur lending and help lift the euro area out of a stubborn recession.

ECB President Mario Draghi said the bank was prepared to flex its muscles further in the face of high and rising unemployment and growing evidence that Europe’s economy is getting weaker. He said the ECB stood “ready to act if needed,” but he also implored European governments – which responded to the region’s debt crisis by slashing spending – to do more to stimulate economic growth.

On Wednesday, the U.S. Federal Reserve signaled it wouldn’t rule out taking more action to boost growth, and Fed Chairman Ben Bernanke warned America’s political leaders that their policies were holding back the economy.

The ECB lowered its benchmark refinancing rate from 0.75 percent, as expected, at a meeting of its rate-setting council in Bratislava, Slovakia. And out of concern that Europe’s financial industry is lending too cautiously and holding back business investment, the ECB also extended its offer of unlimited, cheap loans to banks at least through July 2014. Previously, the ECB had planned to end the program as soon as this July.

To jolt banks into lending more freely, Draghi said the ECB would even consider charging banks to deposit funds with the ECB. Since 2008, the ECB has reduced the interest rate it pays to banks on deposits, from 3.25 percent to zero, creating an incentive for them to lend that money out instead.

Together, the measures announced by the ECB Thursday amounted to a grim recognition: Despite record-low interest rates, European banks still remain risk-averse, while some companies don’t want to risk borrowing in a slow economy.

Draghi also delivered a warning to Europe’s political leaders: Extraordinary actions by the central bank will not be enough to heal the region’s economy. Governments need to accelerate efforts to cut excessive regulations and make Europe a more hospitable place for business.

The economy of the 17 European Union countries that use the euro certainly needs a boost. The ECB says the eurozone will shrink 0.5 percent for all of this year, and unemployment is at 12.1 percent.

Companies across the region are hurting. Auto sales slumped in the first quarter, hitting profits at carmakers such as Daimler, Volkswagen and BMW.

On Thursday, BMW said, “We do not expect to receive a great deal of impetus from most European markets over the next few months.”

Many economists say clogged lending to small companies means Thursday’s cut will not do much good. Marie Diron, senior advisor to Ernst & Young, said her assessment was “slight disappointment that the ECB has done the bare minimum.”

At this point, how low rates can go is “a relatively technical point” compared to the bigger issue of getting low rates transmitted to companies, she said.

Draghi only had a sketchy proposal Thursday of how to solve the problem, saying that ECB officials were working with the European Union’s executive commission and the European Investment Bank lending agency on a strategy to ease lending beyond lower rates. The idea under discussion was to create a market for securities, where loans to businesses would be packaged together and sold to investors – a step that could free up more money for loans.

Market reaction to the ECB decision in Europe was muted, as the interest-rate cut had already been priced in by investors. However, the euro tumbled against the dollar, down almost 1 percent to $1.3063, after Draghi said he would not rule out taking the rate the bank offers lenders for deposits to below zero.

Most economists had expected a cut after recent economic indicators gave alarming signs that the ECB’s prediction for a recovery by year-end might not be coming true. Draghi stuck with that prediction, but said there were risks that “could dampen confidence and delay the recovery.”

He also warned that governments could derail the recovery if they fail to take steps to right their finances and make their economies more business-friendly, such as by cutting excessive regulation on hiring and firing. Governments also need to push troubled banks to strengthen their finances.

“The ECB cannot supplant governments for the lack of structural reforms,” he said, and “cannot clean banks’ balance sheets.”