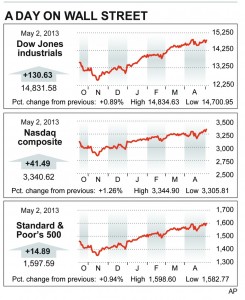 The stock market is all about jobs this week.

Stocks rose Thursday after unemployment claims fell to a five-year low. A day earlier it was just the opposite; the market slumped after companies added just 119,000 jobs in April, the fewest in seven months, according to payroll processor ADP. And stocks could swing again Friday when the government’s closely watched monthly employment report is released.

“Everyone is looking to the April jobs numbers,” said Tyler Vernon, chief investment officer at Biltmore Capital. “People are more confident that it was an anomaly last month and are looking for some bigger numbers.”

Economists forecast that the employers added 160,000 jobs last month. Stocks slumped April 5 when the government said 88,000 jobs were added, less than half the number forecast.

Signs of increased hiring have supported this year’s surge in stocks and pushed the market to record highs. The run-up has started to falter in recent weeks on concern that the global economy is slowing. More jobs should boost consumer spending, a key driver of U.S. growth.

Applications for unemployment benefits fell last week to 324,000, the fewest since January 2008, the Labor Department reported before the market opened.

The outlook for global growth also got a boost after the European Central Bank cut its benchmark interest rate a quarter of a percentage point to 0.5 percent.

GM rose 98 cents, or 3.2 percent, to $31.16 after it lost less money in Europe and beat Wall Street’s expectations for first-quarter profit. The automaker’s earnings of 67 cents a share beat the 54 cents predicted by Wall Street analysts who follow the company.

Facebook gained $1.54, or 5.6 percent, to $28.98 after its first-quarter revenue rose 38 percent, surpassing Wall Street expectations. Nearly a third of the company’s advertising revenue came from mobile devices, a greater share than analysts had expected.

Technology stocks have surged in the past two weeks, after lagging in the S&P 500 in the first three months of the year. Their 5.7-percent increase in 2013 still trails the 18.5-percent gain for health-care companies, the best-performing industry in the index.

Seagate Technology was another technology company that gained Thursday. The company, which makes hard drives, jumped $2.69, or 7.3 percent, to $39.63, even after the company reported a slump in sales and earnings. The decline wasn’t as bad as analysts had expected, though, and Seagate handily beat estimates for both sales and revenue.

Earnings at companies in the S&P 500 are at record levels. They are forecast to increase by 4.4 percent in the first quarter and keep rising throughout the year, according to S&P Capital IQ data.

Stocks are rebounding after a slump Wednesday, when reports of slower manufacturing growth and hiring dragged down markets. The Dow had its worst drop in two weeks. The market was down even after the Federal Reserve Bank reaffirmed its plan to continue its stimulus program, which is now five years old.

The gains suggest that the market is getting ahead of itself given a lackluster outlook for the economy, said Uri Landesman of Platinum Partners. He thinks the stock market is set for a pullback.

In government bond trading, the yield on the 10-year note was unchanged at 1.63 percent, matching its low for the year. Bonds have gained as inflation remains tame.

This article appeared in print on page 8 of the May 3rd, 2013 edition of Hamodia.