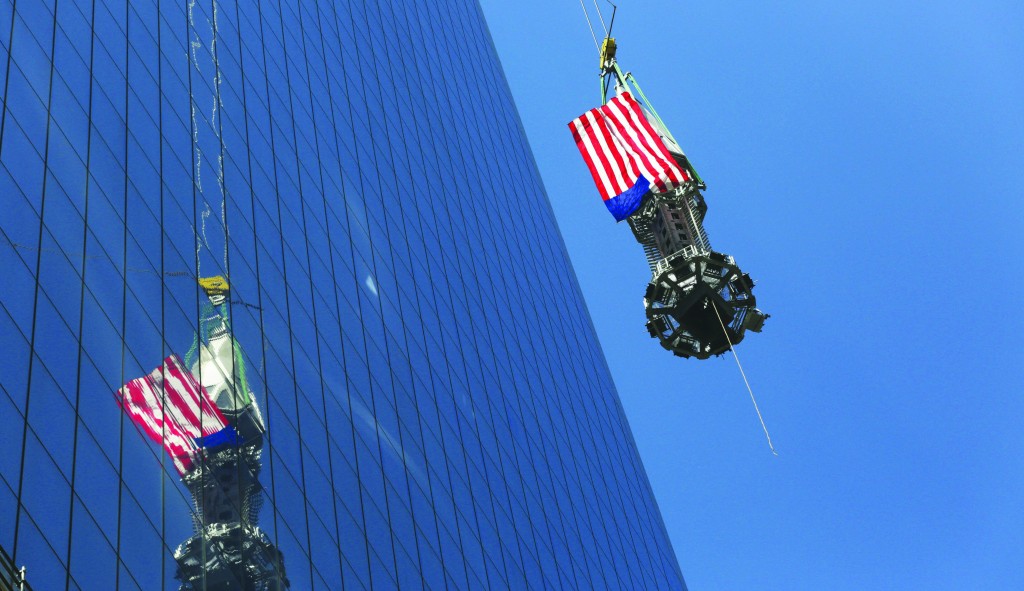 Adorned with an American flag that flapped in the breeze, the last pieces of a silver spire were hoisted to the top of the World Trade Center on Thursday as construction workers cheered its ascent.

The final two segments of the 408-foot spire will rest on a construction platform for several weeks until the entire needle is permanently installed. With the spire as its crown, the trade center will soar to a symbolic 1,776 feet in the air — a reference to the birth of the nation in 1776.

Sunlight glinted off the slender steel structure as it rose slowly into the blue sky. Construction workers inside the building clustered around unfinished floor ledges to get a better glimpse of it.

“It will give a tremendous indication to people around the entire region and the world that we’re back and better than ever,” said Steven Plate, who is overseeing construction of the World Trade Center.

Composed of 18 parts and weighing 758 tons, the spire floated into Manhattan several months ago on a barge.

With a beacon at its peak to ward off aircraft, the spire will provide public transmission services for broadcast channels. An LED-powered light emanating from it will be seen from miles away.

The building is rising at the northwest corner of the site where the Twin Towers were destroyed in the Sept. 11, 2001, terror attacks.

“It’s not just a construction site,” Plate said. “It’s truly a mission for all of us.”

With the additional 408 feet, the building would be the tallest in the U.S. and third-tallest in the world, although building experts dispute whether the spire is actually an antenna — a crucial distinction in terms of measuring the building’s height.

Without the spire, One World Trade Center would actually be shorter than the Willis Tower in Chicago, which currently wears the crown of tallest building in the U.S. at 1,451 feet, not including its own antennas.

The Council on Tall Buildings and Urban Habitat, a Chicago-based organization considered an authority on such records, says an antenna is something simply added to the top of a tower, which can be removed. In contrast, a spire is something that is part of the building’s architectural design.

The tower is slated to open for business in 2014.