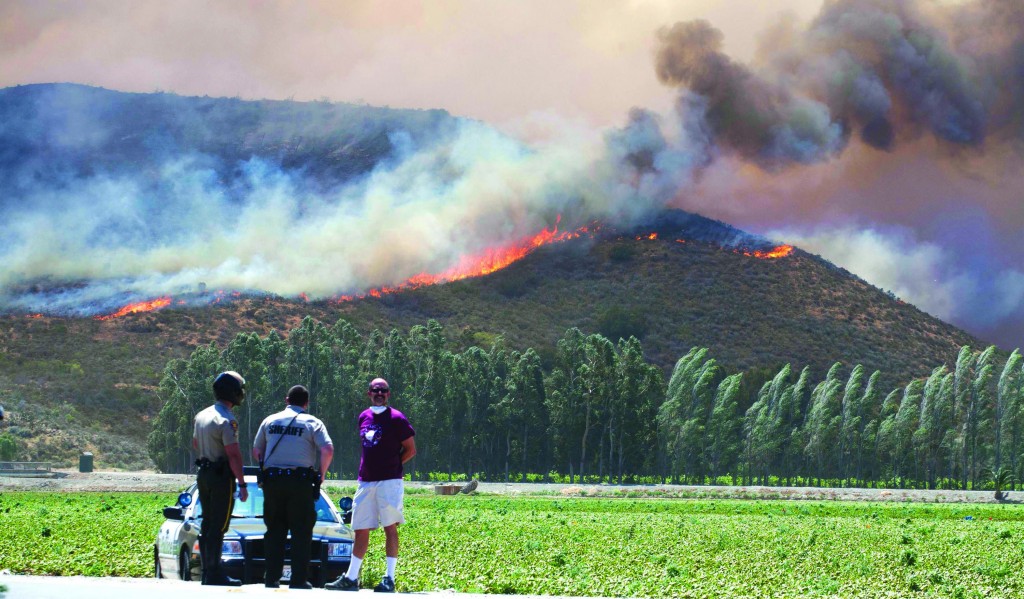 A wildfire fanned by gusty Santa Ana winds raged along the fringes of Southern California communities on Thursday, forcing evacuation of homes and a university and setting recreational vehicles ablaze.

The fire erupted during morning rush hour along U.S. 101 in the Camarillo area, about 50 miles west of Los Angeles. It was quickly spread by the winds, which also pushed other damaging blazes across the region.

Flames quickly moved down slopes toward subdivisions, according to the Ventura County Fire Department. Some 6,500 acres — more than 10 square miles — were charred, with no containment. A cluster of RVs in a parking lot was destroyed as flames moved close to a mobile-home park. There were no reports of homes burning.

More than 500 firefighters from several agencies, with help from aircraft dropping water and retardant, worked to protect numerous homes around Camarillo Springs Golf Course and in a section of adjacent Thousand Oaks.

Air tankers had to be grounded in the early afternoon because of the winds, which gusted to 50 mph.

The Santa Ana winds sent plumes of smoke and embers over the homes and strawberry fields to the south. At midday, farm sheds burst into flames in a clearing amid rows of crops.

The vegetation-withering dry winds out of the northeast caused humidity levels to plunge from 80 percent to single digits in less than an hour. Temperatures soared into the 90s in Camarillo.

The area is at the western edge of the Santa Monica Mountains, which descend abruptly to a coastal agricultural plain. It was possible the flames could burn all the way to the Pacific Ocean, about 10 miles from the start point. The California Highway Patrol closed a 10-mile stretch of Pacific Coast Highway at Point Mugu.

The blazes could signal a difficult fire season ahead.

Officials with the National Interagency Fire Center in Boise said Wednesday in their first 2013 summer outlook that a dry winter and expected warming trend mean the potential for significant fire activity will be above normal on the West Coast, in the Southwest and in portions of Idaho and Montana.