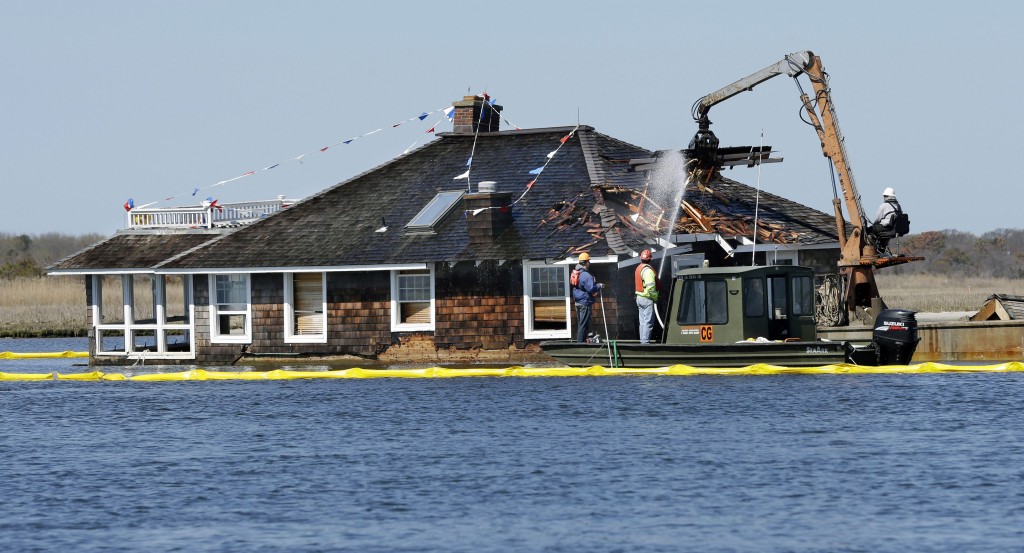 Another of the defining images of Superstorm Sandy’s destruction at the Jersey shore is disappearing as New Jersey cleans up and struggles toward normalcy.

Works crews on Thursday began demolishing a house that was washed into the Barnegat Bay by the violent surge from the Oct. 29 storm. It was one of eight virtually intact homes that the storm washed into bays around the state; work on removing the others will begin soon.

But the house owned by David Roberts, a former mayor of Hoboken, N.J., was the most famous of them all, coming to rest 200 feet from shore in the middle of the bay. His house once sat not far from where the ocean cut a new channel that chopped Mantoloking in half during the storm, necessitating a massive emergency construction project to fill in the breach.

“Today one of the unfortunate icons of Mantoloking and Superstorm Sandy is going to be dismantled,” Mayor George Nebel said, moments before workers on several barges began tearing away at the house and depositing rubble on their vessels, to be floated away and eventually trucked to a landfill.

“During the storm, if we were standing where we are today, we would be standing in 12 feet of water. We hope this state will never withstand the sight of a house in the bay again.”

Mantoloking was the Jersey shore community hardest hit by Superstorm Sandy; all 521 of its homes were damaged or destroyed, and 58 were swept into Barnegat Bay, either whole or in pieces.