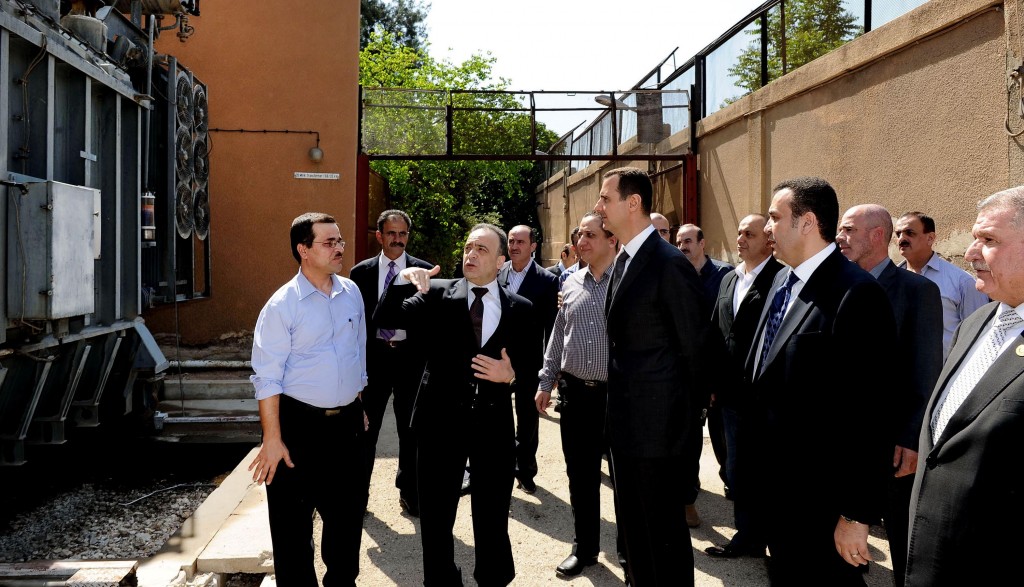 Footage of the visit broadcast on state media showed Assad chatting casually with a group of employees, two days after his prime minister narrowly escaped assassination by an explosion and a day after another major bombing in the capital took the lives of at least 14.

SANA said a 10-year-old boy was killed and 28 people wounded, some seriously, in Wednesday’s attack, when bombs went off in Khaled Bin Walid street and the nearby Bab Mesalla square. It said the bombs were planted by “terrorists,” a term the government uses to describe rebels fighting to topple the Syrian leader.

The Britain-based Syrian Observatory for Human Rights said the Bab Mesalla explosion was near a police station and came from rocket fire. It said the blast left casualties but did not have figures on dead or wounded. It also said that several people, including children, were wounded in the explosion in Khaled Bin Walid street.

Police had sealed off Bab Mesalla, which has restaurants, shops and a main public transportation station linking Damascus with the southern provinces of Daraa and Sweida, the Observatory added.

Assad’s visit to the Umayyad Electrical Station in the Tishrin Park district came on International Workers Day, or May Day. State media showed the Syrian leader, confident in a dark business suit, addressing the station’s staff and shaking hands.

Meanwhile, the Egypt-based Syrian National Coalition rebuked the leader of Lebanon’s Hizbullah terrorist group, in its first public response a day after he said Syrian rebels will not be able to defeat Assad’s regime militarily.

Sheik Hassan Nasrallah had warned that Syria’s “real friends,” including his Iranian-backed terror group, could intervene on the government’s side if necessary.

The coalition said it hoped Hizbullah would stay out of the Syrian war, and urged Lebanon to “control its borders and urgently stop, through all available means, the military operations attributed to Hizbullah in areas close to the Syrian border.”