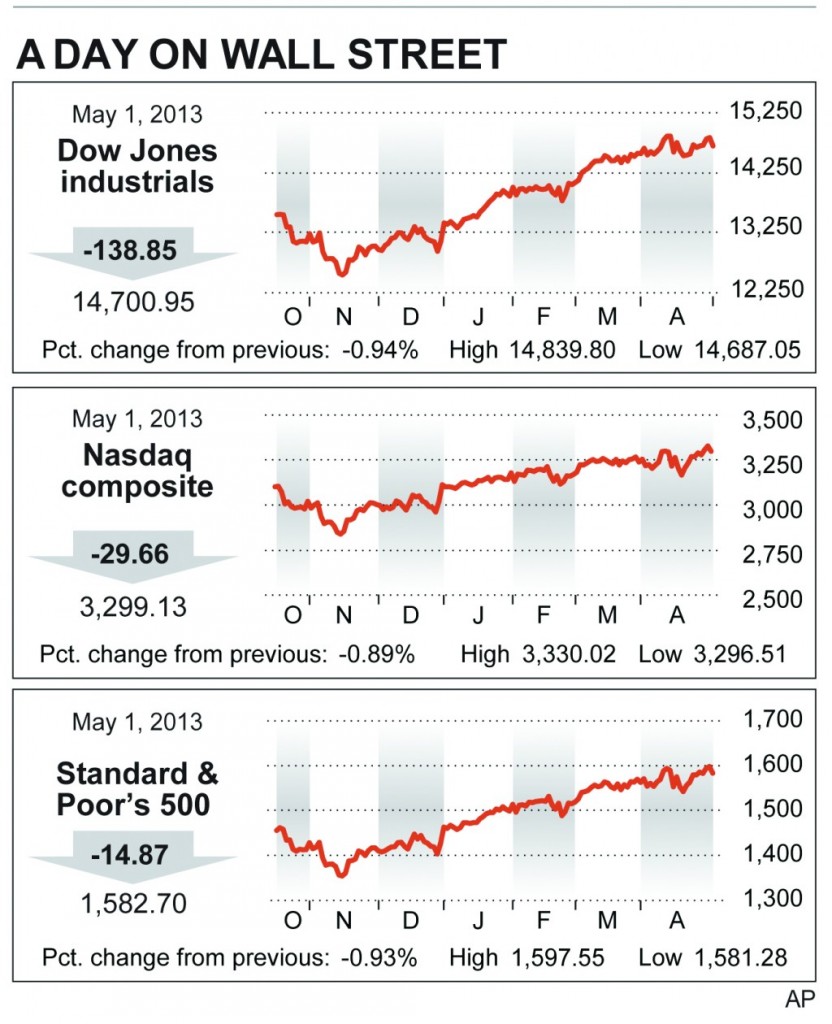 Signs of a slowing economy dragged down the stock market Wednesday. Even the prospect of continued stimulus from the Federal Reserve didn’t help.

Major market indexes fell by 0.9 percent, their worst decline in two weeks. Small-company stocks fell even more, 2.5 percent, as investors shunned risk. The yield on the benchmark U.S. government bond fell to its lowest of the year as investors sought safety.

Stocks opened lower and kept sagging throughout the day, hurt by reports of a slowdown in hiring and manufacturing last month. Discouraging earnings news from major U.S. companies also dragged the market lower.

“Investors are going to be rattled by these numbers,” said Colleen Supran, a principal at San Francisco based-Bingham, Osborn & Scarborough. She expects stock market swings to increase after the early gains of the year.

The Dow Jones industrial average closed down 138.85 points to 14,700 points. Merck, the giant drug company, had one of the biggest falls in the Dow after reporting earnings that disappointed investors. The Dow had risen for four days straight.

The stock market was down even after the Federal Reserve stood by its easy-money policies after a two-day policy meeting.

The Fed is maintaining its $85-billion-a-month bond-buying program, begun in 2008, which aims to keep interest rates low to encourage borrowing, spending and investing.

The Fed also raised concerns about the economy, noting that tax increases and spending cuts that kicked in this year are slowing growth. The central bank made clear that it could increase or decrease its bond purchases depending on the performance of the job market and inflation.

The Fed’s program has been one of the supporting factors behind the stock market’s rally this year. The S&P 500 reached record highs in April and has risen every month in 2013, gaining 11 percent so far this year.

The market has stumbled in recent weeks after several reports suggesting the economy might be weakening.

Employers added only 88,000 jobs in March, far fewer than the 220,000 averaged in the previous four months, and the economy grew at an annual rate of 2.5 percent in the January-March quarter — a decent rate but one that’s expected to weaken in coming months because of higher Social Security taxes and the federal spending cuts.

On Wednesday, a report showed that U.S. factory activity in April dropped to its slowest pace this year as manufacturers pulled back on hiring and cut stockpiles. Companies added just 119,000 jobs in April, the fewest in seven months, said payroll processor ADP.

Drugmaker Merck & Co. fell $1.31, or 2.8 percent, to $45.69 after cutting its 2013 profit forecast. The company said competition from generic versions of its drugs and unfavorable exchange rates hurt its profit.

MasterCard eased $13.11, or 2.4 percent, to $539.80 after the payments processing company reported that revenue missed the expectations of financial analysts who cover the company.

About two-thirds of companies in the S&P 500 index have announced earnings for the first quarter.

The earnings are at record levels, and about seven of 10 companies have topped the forecasts of Wall Street analysts, according to S&P Capital IQ. Revenues have disappointed, though, with about six of 10 companies falling short. That suggests companies are raising profits through cutting costs rather than boosting revenues.

Earnings at S&P 500 companies are expected to increase 4.1 percent in the first quarter versus the same period a year earlier. Financial analysts expect that growth to accelerate throughout the year, reaching 12 percent in the final quarter, according to S&P Capital IQ.

But with much of the profit gain coming from cost-cutting rather than higher sales, some market watchers are warning that the market’s four-year surge could be coming to an end.

T-Mobile USA Inc., the combination of T-Mobile USA and MetroPCS, rose 96 cents, or 6.2 percent, to $16.52 on its first day of trading. Goldman Sachs analysts opened their coverage of the stock with a “buy” recommendation and a 12-month price target of $22, predicting that the company will benefit from further consolidation in the industry.

The Nasdaq composite index dropped 28 points, or 0.8 percent, to 3,300. The Russell 2000 index, a gauge of small-company stocks, fell 23.25 points to 924.21. Small stocks are generally seen as riskier investments because the companies are less established, have fewer resources and are more prone to failure.

In government bond trading, demand for the 10-year Treasury note rose, pushing down its yield to 1.63 percent from 1.67 percent. The yield is at its lowest of the year.

Markets in Europe were closed for the May Day holiday.