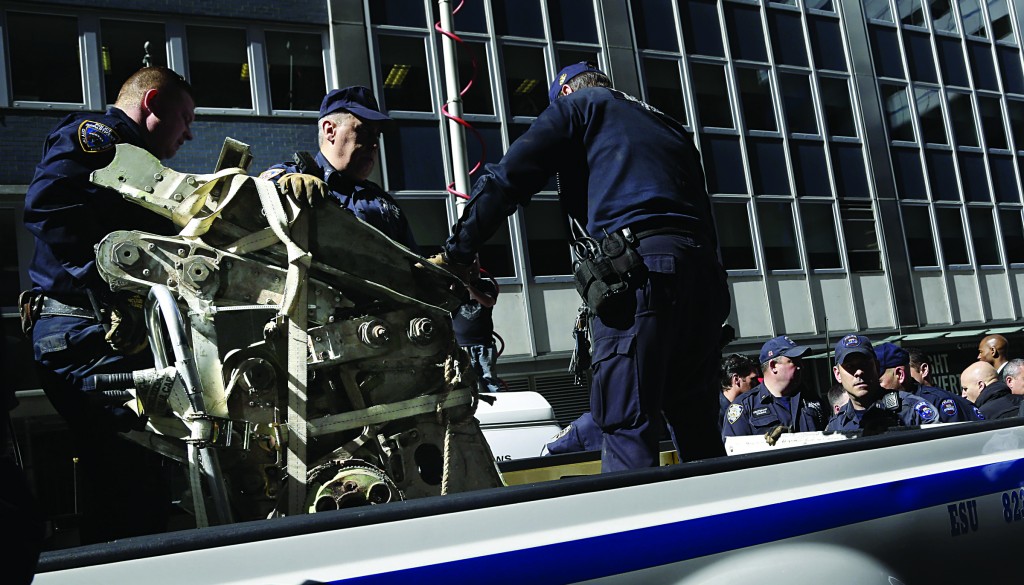 Using a pulley system and sheer brawn, police removed a suspected 9/11 plane part from between two buildings near the World Trade Center site, and the medical examiner said no potential human remains had been found there.

About a dozen officers raised the jagged, 255-pound metal piece, which contains cranks, levers and bolts, from the ground. They took it over a three-story wall, lowered it into a courtyard and they carried it through the basement of a planned mosque, where it was discovered by an inspector last week.

Onlookers across the street took pictures as they heaved it onto a truck taking it to a Brooklyn police facility. The process took about two hours.

“It’s a piece of history, and we tried to preserve it as best we could,” said NYPD Deputy Chief William Aubry, who leads the forensic investigation division. Aubry said they didn’t do any damage to the piece when they moved it.

The part was discovered a week ago, wedged in a narrow space between a luxury apartment building and the “Ground Zero mosque” that prompted a national debate about Islam and freedom of speech because it’s located just blocks from the World Trade Center site. An inspector doing construction work at the mosque site noticed it from the rooftop.

Authorities believe the rusted wing part is from one of the two hijacked airliners that brought down the trade center on Sept. 11, 2001.

The 5-foot piece was initially thought to be a piece of landing gear, but officials later determined it was a trailing edge flap support structure. Located close to the body of the plane, the part helps secure wing flaps that move in and out and aid in regulating speed.

Boeing officials told police the part came from one of its 767 airliners, but it isn’t possible to determine which one. Both hijacked planes that struck the towers, American Airlines Flight 11 and United Airlines Flight 175, were Boeing 767s. American and United have had no comment.

The medical examiner’s office sifted through sediment at the site for days, but found no potential human remains.

Investigators continue to recover potential human remains from the trade center construction site. About 3,000 people died in the attack, and 1,000 were never identified.