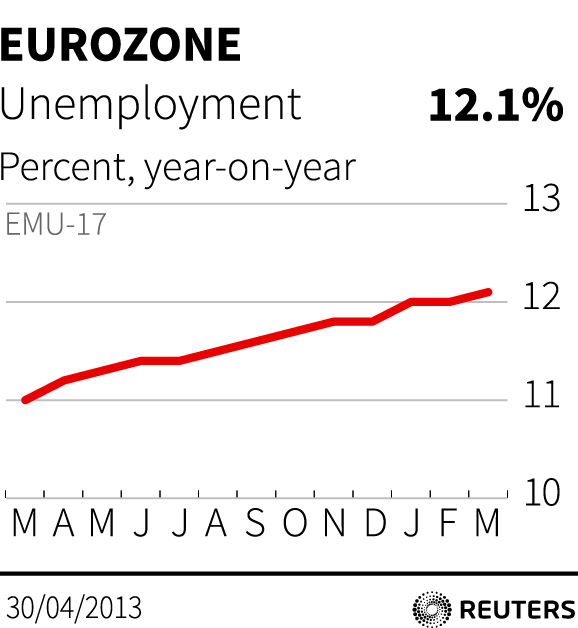 The eurozone’s unemployment rate hit a record high of 12.1 percent in March as the region continued to struggle with recession, government officials said Tuesday.

The seasonally adjusted jobless rate for the 17-nation group topped the previous 12-percent record reached in January and February, according to Eurostat, the region’s statistical office.

At the same time, inflation fell in April to an annualized rate of 1.2 percent from 1.7 percent the previous month, Eurostat said. The combination of rising unemployment and low inflation could lead the European Central Bank to cut interest rates further after it meets this week.

The March unemployment rate was the highest recorded since the European Union began tracking the rate in 2000, following the creation of the region’s single currency.

The rate was up sharply from a year earlier, when unemployment stood at 11 percent, as debt struggles have pulled the eurozone back into recession. The unemployment rate was up year-over-year in 19 of the region’s countries.

Spain had the highest unemployment rate in March at 26.7 percent. Greece’s rate was 27.2 percent in January, the latest figures available.

A 0.4 percent drop in energy prices in April helped bring inflation well below the European Central Bank’s target maximum of 2 percent. The bank’s governing council is meeting this week and would announce any new monetary policy moves Thursday.

The ECB’s main short-term interest rate is 0.75 percent, and could be cut further. The U.S. Federal Reserve has kept its key short-term rate near zero since late 2008.