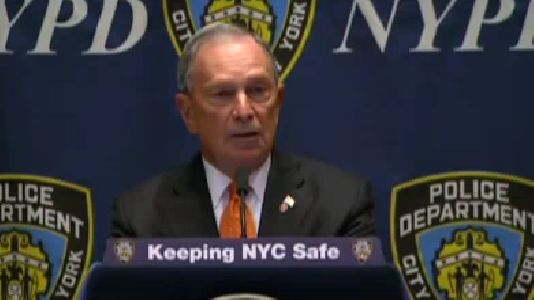 In a pugnacious defense of what he called a police force bombarded by politics, Mayor Michael Bloomberg lashed out Tuesday at critics of the New York Police Department’s stop-and-frisk practice and surveillance programs.

“The NYPD is under attack,” the mayor said in a speech that lauded the department for lower crime rates, raised the specter of terrorism and excoriated supporters of legislation that would rein in stop-and-frisk. He also was critical of legal groups that have sued over the practice, mayoral candidates — whom he didn’t name — and the media.

“Stop playing politics with public safety. Look at what’s happened in Boston. Remember what happened here on 9/11. Remember all of those who have been killed by gun violence and the families they left behind,” Bloomberg said. “We owe it to all of them to give our officers all the tools they need to protect innocent lives or people will needlessly die, and we’ll all be responsible.”

It was a message the mayor has sent before, amid an ongoing federal civil rights trial over stop-and-frisk and City Council hearings to set new rules for the tactic. He also has repeatedly embraced the NYPD’s surveillance and other counterterror programs in Muslim neighborhoods.

But the 22-minute speech and setting — at police headquarters, in front of a room full of uniformed officials — telegraphed a stepped-up, aggressive response to those who question whether the nation’s largest police department has overstepped its bounds.

Bloomberg also slammed the media for not reporting crimes that do not fit in with their worldview, such as the recent slaying in the Bronx of a Hispanic teen.

“Four days after Alphonza Bryant’s murder went unreported by The [New York] Times, the paper published another editorial attacking stop-question-and-frisk,” Bloomberg said. “They called it a ‘widely loathed’ practice. … Let me tell you what I loathe. I loathe that 17-year-old minority children can be senselessly murdered in the Bronx and some of the media doesn’t even consider it news.”

“After his murder … there was not even a mention of his murder in our papers, our paper of record, The New York Times,” he added. “‘All the News That’s Fit to Print’ did not include the murder of 17-year-old Alphonza Bryant. Do you think that if a white, 17-year-old prep student from Manhattan had been murdered, The Times would have ignored it? Me neither.”

Some were quick to push back. Public Advocate Bill de Blasio, one of the Democrats seeking to succeed Bloomberg next year, called the mayor’s speech “fear-mongering” that “offers a false choice between public safety and our basic constitutional rights.”

Stop-and-frisk — the practice of stopping, questioning and sometimes patting down people seen as doing something questionable but not necessarily meriting arrest — has become a flashpoint as the stops rose dramatically in the last decade to nearly 700,000 in 2011. They dropped to 533,000 last year.

The mayor has long insisted the stops are based on suspicious behavior, not racial bias, and are a powerful tool for curtailing crime.

“There is no doubt that stops are a vitally important reason” New York has lower rates of major crimes than other big American cities, he said.

The stops have spurred protests, have become a must-address issue for mayoral candidates and have engendered the ongoing federal trial and negotiations propelling the City Council proposals toward a vote.

City Council Speaker Christine Quinn — the Democratic front-runner in the mayor’s race — is supporting a measure that would create an inspector general to look at the NYPD’s policies and procedures. She said last week she opposed but wouldn’t block a vote on a proposal that would make it easier for people to sue over stops they felt reflected racial profiling.

Bloomberg, often seen as a key potential supporter for Quinn’s mayoral bid, blasted both proposals. He said the lawsuit proposal would “allow New York State judges to micromanage the NYPD” and an inspector general could make other law enforcement agencies reluctant to share information with the NYPD, for fear the inspector might have access to it.

Quinn said in a statement that she agreed the lawsuit proposal would encourage frivolous claims but felt the inspector general was needed to balance preserving safety with promoting stronger relations between police and citizens.