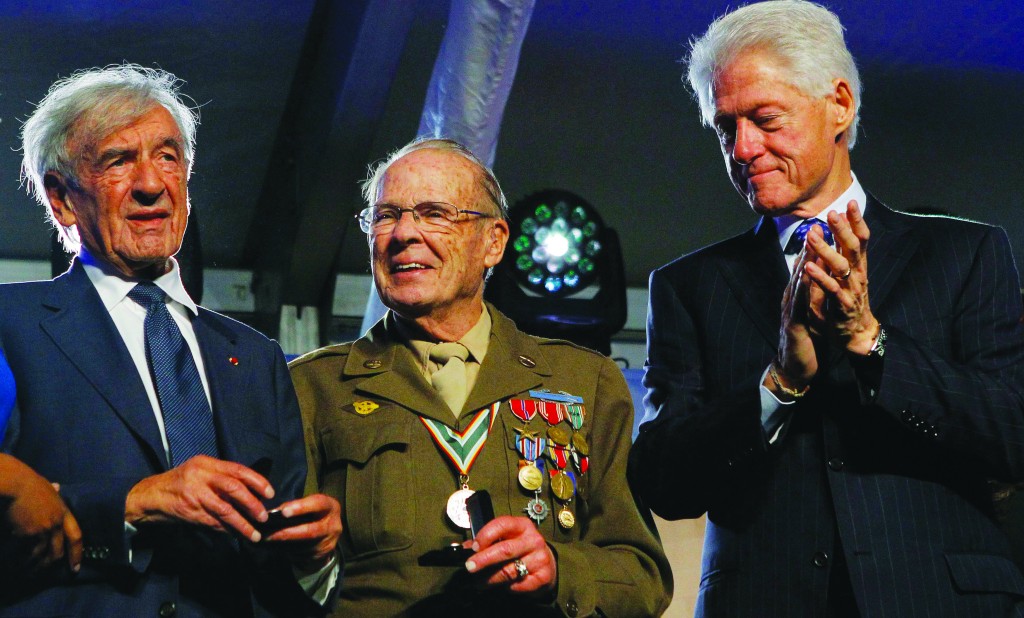 Elderly Holocaust survivors and the veterans who helped liberate them gathered for what may be their last big reunion Monday at the U.S. Holocaust Memorial Museum.

Nearly 1,000 survivors and World War II vets joined with former President Bill Clinton and Nobel Peace Prize laureate and Holocaust activist Elie Wiesel to mark the museum’s 20th anniversary. Organizers chose not to wait for the 25th milestone because many survivors and vets may not be alive in another five or 10 years.

“We felt it was important, while that generation is still with us in fairly substantial numbers, to bring them together,” said Museum Director Sara Bloomfield.

Washington has many monuments and memorials that offer something special for visitors from around the world, Clinton told the crowd, “but the Holocaust memorial will be our conscience.”

The occasion marked a reunion of sorts for Clinton and Wiesel: Both were on hand to dedicate the museum at its 1993 opening. On Sunday night, the museum presented its highest honor to World War II veterans who helped end the Holocaust. Susan Eisenhower accepted the award on behalf of her grandfather, Gen. Dwight D. Eisenhower, and all veterans of the era.

The federally funded museum also launched a campaign to raise $540 million by 2018 to keep the memory of the Holocaust alive and to combat anti-Semitism, Holocaust denial and contemporary genocide.

It has already secured gifts totaling $258.7 million in its quest to double the size of the museum’s endowment by its 25th anniversary. Also, a $15 million gift from Holocaust survivors David and Fela Shapell will help build a new collections and conservation center.

Herman Zeitchik, 89, of Silver Spring, Md., was a young Army soldier when his unit landed at Normandy in the mission to liberate Europe. He remembers coming across the Dachau concentration camp unexpectedly in southern Germany.

“They never told us there was a concentration camp, but we smelled it,” Zeitchik said. “We smelled the burning flesh.”

Later during a patrol, Zeitchik saw people held within the camp’s chain-link fence. “That’s the first time I knew about the concentration camps,” he said.

Dachau was the first regular Nazi concentration camp, established in 1933. The Americans liberated Dachau’s prisoners in 1945.

The museum continues collecting objects, photographs and other evidence of the Holocaust from survivors, veterans and archives located as far away as China and Argentina. Curators expect the collection to double in size over the next decade.

Since opening, the museum has received more than 35 million visitors.